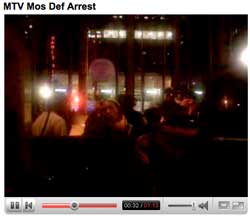 “And Mister President is a natural ass, he out treating niggaz worse than they treat the trash..And if you poor, you black, I laugh and laugh, you better off on crack, dead or in jail, or with a gun in Iraq.”

On August 31 MTV’s Video Music Awards commenced at New York’s Radio City Music Hall. By 10 p.m. television viewers were still waiting for the excitement of quintessential American pop-culture spontaneity circa 2006. You know, those most uplifting of episodes, like the time Britney Spears made-out with Madonna thus making international headlines. Or when rapper Lil Kim wore a dress showing cleavage, or one of the many times Chris Rock commented on Jennifer Lopez’s body as if it were a choice cut of meat in a butcher shop.

So it was an incident of actual social and cultural import—not to mention courage and heroism—when Brooklyn ambassador to the Universe, Mos Def, rolled up the Avenue of the Americas in Manhattan’s midtown on a flatbed truck. Days after the one-year anniversary of Hurricane Katrina, which was fresh on the minds of millions of Americans, Mos Def staged a guerrilla performance of “Katrina Clap” (itself a remix of New Orleans’ rapper Juvenile’s “Nolia Clap”). Recorded immediately after the Hurricane last year, at the beginning Mos Def dedicates “Katrina Clap” to “the streets affected by the storm called America.”

He began to perform the song in front of hundreds of MTV fans lined up on the sidewalk. Barely a minute into his performance the police surrounded the truck, and one officer surged into Mos Def. Surrounded by a swarm of police officers Mos Def was arrested for, get this, performing without a sound permit!! He wasn’t run through the system and only received a summons, well after his performance was attacked and sabotaged, an act clearly meant for public humiliation and stringent intimidation. Compared to the crimes committed against the people by this government all this would have been unjust done to anyone, but let it be emphasized that the artist arrested is a well-respected award-winning Hollywood actor.

By virtue of the fact that this recent action was staged outside an event with hundreds of prominent artists it is clear that Mos Def is not only telling “the Boss he shouldn’t be the Boss anymore” but also challenging others with voices of prominence. Mos Def had some words for Bono (singer for rock & roll supergroup U2) as well: “[Katrina is] enough to make you holler out, like where the fuck is Sir Bono and his famous friends now? Don’t get it twisted man I dig U2, but if you ain’t about the ghetto then fuck you too!”

Many an artist have made work of late that, indirect or overt, challenge the whole direction society has been going and, in particular, call out the Bush Administration. In the time it took me to write the previous two sentences I thought of over 20 such bands and artists. We need more and more artists stepping out like this, and we need to get their back when they come under attack, all while connecting this up with the movement organizing for October 5, The World Can’t Wait Drive Out The Bush Regime.

So hats off to Mos Def for his brave and defiant move at the Video Music Awards. It is not simply that Mos Def recorded and performed his “Katrina Clap” remix. It is the fact that he did something heroic and risky, something which broke the mold for its element of surprise and truthfulness and therefore caught the attention of the people and the authorities.

There is, in actuality, a large reservoir of people wanting and waiting to do something to go up against the Bush Regime. That mass of people needs to hear from the artists, and those artists need to hear from the multitudes of people that the time is yesterday for routine as usual. This must happen now.

You can watch the incident of Mos Def being arrested on the internet at youtube.com, where you can also watch the music video for “Katrina Clap” (type in “Mos Def Katrina”).