"Extreme liberals, they have to look at this and start shaking in their boots."
- Pastor Becky Fischer in Jesus Camp

“Think of it as boot camp for the future army of God.”
- Neva Chonin, San Francisco Chronicle 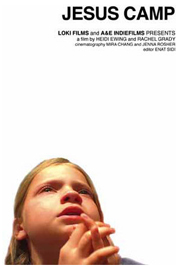 Jesus Camp follows a group of young children to Pastor Becky Fischer’s “Kid’s on Fire Summer Camp” where kids are taught to become dedicated soldiers in “God’s army” and are schooled in how to take back America for Christ.

It’s easy to see the damage being done to these youth by the Christian fundamentalism being forced down their throats. Eleven-year-old Tori, one of the three children that the film focuses on, loves dancing to Christian heavy metal, but frets that it's not always easy to dance for God instead of "dancing for the flesh." Pastor Becky warns the kids of the dangers of Harry Potter. “Warlocks are the enemies of God,” she rails. “If Harry Potter were in the Bible he would have been put to death,” she tells the ten-year-olds.

However, the damage to individual youth is not the biggest horror. Pastor Becky says that she wants the same level of religious frenzy among the youth at her camp as exists at schools that train youth as Islamic fundamentalist suicide bombers. "I want to see them as radically laying down their lives for the gospel as they are in Palestine, Pakistan and all those different places," Fisher said, mentioning that children in these countries are ready to put on bomb belts and carry AK’s. "We have to stand up and take back the land," she adds.

At the beginning of the camp the youth do a militaristic dance number, with the boys wearing combat fatigues and face paint. "We’re being trained to be God’s Army, ” one of the children says.

In one of the most chilling scenes in the movie, a counselor takes the stage and asks the 6- to 11-year-olds whether they are ready to “give their lives to Jesus.” He rants about how the enemies of God have taken religion out of the public schools and leads the youth in chanting to “break the power of the devil in this nation.” This reaches a frenzy level when the youth smash ceramic cups with the word “government” written on them while Pastor Becky starts shouting over and over into the microphone, “This is war! Are you a part of it or not!”

In another scene a counselor brings in a life-size cardboard cutout of President Bush. The children are told to “bless the President because he has surrounded himself with spirit-filled people.” The children lay their hands on the cardboard and are led to chant “one nation UNDER GOD” and “Righteous Judges” [this is a reference to the nomination of conservative Justice Alito to the Supreme Court which was taking place as the film was being made].

Becky Fischer and her camp are not just a small group of crazies. She is a foot soldier in the Christian Fascist movement.

Toward its end, the film shifts to a Colorado Springs mega-church run by Ted Haggard, a national leader of the Christian fascist movement. Thousands of people attend Haggard’s sermons, and he is the president of the 30-million-member National Association of Evangelicals. He is one of a group of right-wing Christians who talk to President Bush every week.

Haggard’s sermon was chilling. “We’ve decided that the Bible is the word of God, and we don’t need to have an assembly because we know what the Bible says.” This brought to mind all the things that the Bible does say—from the death penalty for homosexuals, rebellious children, and unbelievers, to the subservient role of women, to its instructions that slaves should obey their masters, even if they are cruel. “It’s massive warfare every day. Let the battle begin,” Haggard continues.

Training youth to be part of an army for god is part of a strategy that has been formulated by high-level operatives in the Christian fascist movement. Michael Farris, the founder and president of Patrick Henry College, named the movement to turn Christian home-schooled students into political operatives Generation Joshua. (In the Bible, Joshua was Moses’ military commander. Moses led the Israelites out of bondage and to the “promised land,” but it was Joshua who led them in seizing the land in battle.)

Farris is a long-time Christian fascist. He is a protégé of Tim LaHaye (author of the Left Behind series) and was chief counsel for Concerned Women of America. In 1983, he founded the Home School Legal Defense Association, which has helped pave the way for the growth of home schooling. In his book Generation Joshua, Farris writes that the home-schooling movement “will succeed when our children, the Joshua Generation, engage wholeheartedly in the struggle to take back the land.”

All of the students followed in Jesus Camp were home schooled. The number of home-schooled children has risen exponentially in recent years from a few tens of thousands in the 1980s to an estimate of somewhere between 1.1 million and 2.1 million, today. According to Jesus Camp, 75% of these children are home schooled by parents who are evangelical Christians.

A whole industry has grown up providing textbooks, videos, and other “educational materials” to Christian home schooling parents that teach why evolution is wrong, that the earth is only 6,000 years old, that the U.S. was founded as a “Christian nation,” that the Grand Canyon was formed by Noah’s flood, that humans coexisted with dinosaurs in the “Garden of Eden,” and other nonsense.

Lest anybody think this is a strategy without much chance of success, check out the impact this is having today. Farris’s Patrick Henry College, which caters specifically to home-schooled evangelical students, provided 7% of all White House interns in 2004. Twenty-two congressmen have employed one or more Patrick Henry interns, and a Patrick Henry graduate works on Karl Rove’s staff. Not bad for a school which accepts fewer than 100 students each year.

A political organization called Generation Joshua was formed in 2004. It sent teams of indoctrinated youth to help in Senate campaigns like those of Tom Colburn (who called for the death penalty for doctors who perform abortions) and Jim DeMint (who said that gays and unmarried pregnant women should not be allowed to teach in public schools).

Everyone who is concerned about the future needs to see Jesus Camp. It is shocking and scary to confront the mobilization of a Christian fascist movement in this country that is working to convert the U.S. into a Christian state. This is a movement, with backing from high levels of the ruling class, which has been built up over decades and is very determined to reach its goal. And, to be honest, they are very far down their road. Those who want to see a different future than the one planned by these would-be ayatollahs need to struggle with increased determination and a great sense of urgency to change the direction in which this society is headed.

* A madrassa is an Islamic religious school. During the 1980s, when Islamic forces armed and backed by the United States fought the Soviet Union in Afghanistan, a new kind of madrassa emerged along the border between Pakistan and Afghanistan, teaching a rigid form of fundamentalist Islam. Many of the Taliban were educated in these madrassas. [back]