The Political Blues of the World Saxophone Quartet 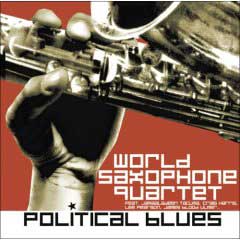 Political Blues is enjoyable, potent, and provocative. In the tradition of Max Roach’s 1960 Freedom Now Suite, this new CD by the World Saxophone Quartet is squarely in and of the moment, capturing widespread and deeply felt dissatisfaction and downright anger—especially in the wake of Hurricane Katrina. As the liner notes put it, the WSQ have chosen to address the current political climate of the United States with “no-holds-barred lyrics, provocative arrangements and superlative performance… a recording that is seething in its disdain for the current Administration.”

An upright hand grasping a saxophone graces the CD cover, evoking the power fist of the 60s that silk-screened its way onto millions of t-shirts and armbands, becoming a symbol of rebellion for a whole generation. And the fervor of that time clearly reverberates in this compilation.

The title track begins with a cow-bell introducing heavy hard-popping electric bass. After eight bars, the whole ensemble joins in, somehow producing a full big-band sound with the horns swinging and starting the testifying. Then, with a raucous mood firmly established, David Murray delivers an opening salvo, not on his tenor sax or bass clarinet, but with blistering vocals, melding rap, funk and traditional blues:

And more are added to the list of indictees, including: Bush, Cheney, Rice; the 2004 elections that brought us this motley crew; the GOP; and the U.S. role in the Third World.

Three of the WSQ founding members, Oliver Lake (alto), David Murray (tenor, bass clarinet), and Bluiett (baritone) are present. And Bruce Williams and Jaleel Shaw share the alto spot to fill out the saxophone quartet (founding member Julius Hemphill on alto died in 1995). But this is not the usual WSQ sound with nothing but sax. And the list of guest musicians is impressive: Jamaaladeen Tacuma on bass, Craig Harris on trombone, Lee Pearson on drums, James “Blood” Ulmer on guitar and vocals, Jeremy Pelt on trumpet, Carolyn Amba Hawthorne on vocals, and Herve Samb on guitar.

Longtime fans hearing Political Blues will immediately recognize WSQ’s signature and completely unique sound — the unpredictable unruliness of tightly tiered saxophone voices that you always just wait to fly off into tonal outer space. David Murray has been one of my favorite jazz musicians for over 25 years. His music, not just with the WSQ, but in his many other projects, has always delivered a good dose of defiance, including in its edge of challenging any notion of complacency in “traditional jazz.” Murray is known for his exploration of stratospheric-register squawks and squeals that can be shocking and jarring but at the same time fluidly integrated into a whole musical journey—where even if you temporarily get left behind, he always comes back round to get you. And his most far-out sonic explorations still remain rooted in blues and the swing of jazz, with a heavy dose of funk and soul.

The government’s unforgivable abuse and neglect in the wake of Katrina is an abiding theme of outrage on Political Blues, not just in the lyrics, but in the presence of New Orleans jazz riffs and Bourbon Street marching tempos that ride right alongside super-funk, gut-bucket blues, and improvisational wildness.

There are other notable tracks here as well. On Mannish Boy, James Blood Ulmer sings a version of a Muddy Waters standard tune that combines traditional foot-thumping blues with signature WSQ swirling and screeches, giving new passion to the refrain, “I’m a man… I’m a man.” Amazin’ Disgrace calls to mind the familiar gospel (minus the “dis”). But when Carolyn Amba Hawthorne sings: Amazin’ Disgrace/When they brought us to/This god forsaken place/They raped our mothers/Incarcerated our fathers, stole all the land/They’re destroying all the Earth Water and Air, this is no hymn to resignation or surrender. Bluocracy has Bluiett mocking conservative tradition-bound jazz musicians—whom he calls “neos” and “so-sos,” then asks, “Must we go back to slavery? A 21st-century modern minstrelsy?” Part 2 of this bluesy 3-part suite has Craig Harris on didjeridoo (an Aborigine Australian wind instrument) offering a decidedly dissatisfied growling underneath an upbeat saxophone chorus that gives way to an unruly duet between a Harris trombone that is both avant-garde and New Orleans-ish, and Murray launching supra-register riffs on tenor. The ultra funky Blue Diamond with its insistent plucking bass reminded me of Sly and the Family Stone’s Thank You Falettinme Be mice Elf Agin (yes, that is the actual title!). And this composition by Craig Harris is just plain fun, with a laid-back swing providing the stage for great solos by Harris, Murray, and Bluiett. The ending track, Spy On Me Blues has the saxes trading solos before featuring Oliver Lake on vocals, delivering a searing, satirical commentary on the government’s abysmal and criminal response to Katrina.

This is definitely one worth not just checking out, but listening to again and again. As the liner notes say, Political Blues is “a statement that’s both timely and timeless, and never less than utterly compelling.”