Hook up with the revolution 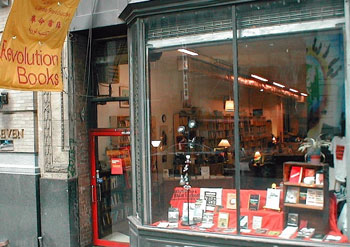 Tuesdays, 7 pm
Join us for a series of sweeping and incisive discussions based on the new series “MAKING REVOLUTION AND EMANCIPATING HUMANITY” by Revolutionary Communist Party, USA Chairman Bob Avakian. The discussions are open to those who’ve been engaging the works of Bob Avakian and those who are brand new—all are welcome! Together we’ll get into some of the most essential questions confronting people who want to see a different world.

February 5: What is wrong with religion—and how would/should a new society deal with religious belief and religious institutions? Does a god exist? And even if such a god does not exist, don’t people need a god in order to “be good” or to have hope and purpose?

February 12: What really happened in socialist societies? What would “doing better” mean and look like—and can you really do better?

Darwin Day commemoration (Call for date and time)
Discussion of The Science of Evolution, The Myth of Creationism – Knowing What's Real and Why It Matters by Ardea Skybreak

March 13, Thursday, 7 pm
Chris Finan
From the Palmer Raids to the Patriot Act 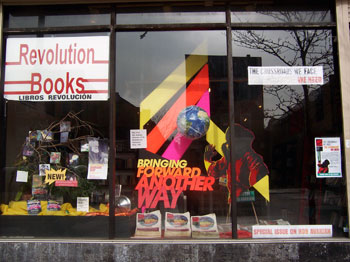 Monday, February 4, 7:30-9:30 pm
Revolution Books Jam Session - an experiment in directive musical improvisation. An open invitation of participation is extended to ALL musicians to join in. The goal of the evening is to create a series of spontaneous collective compositions facilitated by the house band. EVERYONE is welcome to witness and enjoy this musical event and explore Revolution Books.

February 10, Sunday, 5 pm
Discussion of “Making Revolution and Emancipating Humanity” by Bob Avakian. What is freedom? What is power? And what is the relationship between the two?

February 17, Sunday, 2 pm
Ardea Skybreak's The Science of Evolution and the Myth of Creationism: Knowing What's Real and Why It Matters. Discussion 3: Evolution and Human Beings.

February 17, Sunday, 5 pm
Discussion of “Making Revolution and Emancipating Humanity” by Bob Avakian. What is truth? What is science? Can you scientifically understand society? Does such an understanding mean there is no room for free will and human ideals and actions?

February 23, Saturday, 2 pm
Author appearance: Timuel Black
Timuel Black is an historian and author, chronicler of the Great Migration of Black people from the South to Chicago. He will speak on the dreams and expectations of Black people in their migration to Chicago, which gave way to a very different reality and the continuing struggle to bring in a better world.

February 24, Sunday, 5 pm
Discussion of “Making Revolution and Emancipating Humanity” by Bob Avakian. What is democracy? What is dictatorship? And what is America—a democracy, a dictatorship, or both? If the “true ideals of the founders” could be realized—what would it look like—and why?

February 29, Friday 7 pm
"Opposing White Supremacy and Getting to a Far Better World", with Clyde Young of the Revolutionary Communist Party.

March 2, Sunday, 2 pm
Ardea Skybreak's The Science of Evolution and the Myth of Creationism: Knowing What's Real and Why It Matters. Discussion 4: Anti-Evolution Creationism: An Assault On All of Science, In the Name of God. 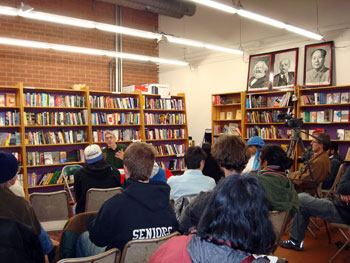 February 6, Wednesday, 7 pm
Dahr Jamail discusses his book Beyond the Green Zone: Dispatches From an Unembedded Journalist in Occupied Iraq

February 9, Saturday, 11 am
Book discussion: The Science of Evolution and the Myth of Creationism by Ardea Skybreak
Evolution is in action all around us – what we can learn from viruses and fruit flies

February 11, Monday, 7 pm
Discussion: The Jena 6, the Nooses, And Why We Need a Revolution 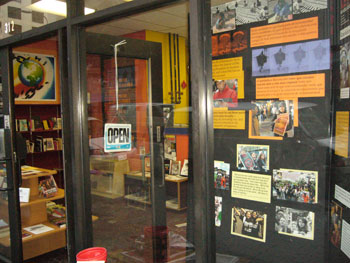 February 6, Wednesday, 7:30 pm
The Science of Evolution, The Myth of Creationism – Knowing What's Real and Why It Matters by Ardea Skybreak. First in a series of discussions: Why is evolution important for everyone to know? What did Darwin figure out?

February 9, Saturday, 2 pm
“Opposing White Supremacy & Getting to a Far Better World”: Presentation and discussion with Clyde Young from the Revolutionary Communist Party.

February 10, Sunday, 4:30 pm
Bilingual discussion of Bob Avakian’s recent talk “Making Revolution and Emancipating Humanity.” Focus this week will be on the "Historical Experience and the New Synthesis," excerpt in issue #112 of Revolution/Revolución newspaper.

February 12, Tuesday, 7:30 pm
Celebrating Darwin Day with a presentation and second discussion based on The Science of Evolution, The Myth of Creationism—Knowing What's Real and Why It Matters by Ardea Skybreak.

February 16, Saturday, Call for time
Reception for Hank Brown and Alice Woodward, Revolution newspaper journalists who have been covering events in Jena, Louisiana.

February 7, Thursday, 7 pm
Second in a series of discussions on Part 1 of “Making Revolution and Emancipating Humanity” by Bob Avakian: Are All “Ideal Visions of Society” Equally Valid and Good?

Every Saturday in February, 7 pm
Ongoing reading and discussion of the series “Making Revolution and Emancipating Humanity” by Bob Avakian

Every Sunday, 4 pm
Discussions of "Making Revolution and Emancipating Humanity—Part 2: Everything We're Doing Is About Revolution" by Bob Avakian, Chairman of the Revolutionary Communist Party, USA

Every Thursday, 6 pm
Discussion on the latest issue of Revolution newspaper, digging into articles and expanding distribution

Every Monday, 6:30 pm
Weekly discussion of the work of Bob Avakian

February 9, Saturday, 6:30 pm
Dinner and discussion with the staff at Revolution Books about ways the store can make big leaps in the coming year in projecting out as a center of revolutionary ferment and a pole of a revolutionary communist movement. Please contact us in advance if you plan to come. 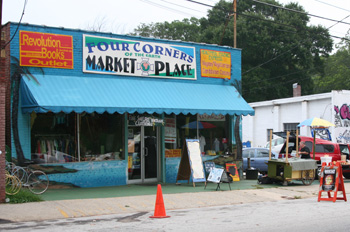