Praise for the Book 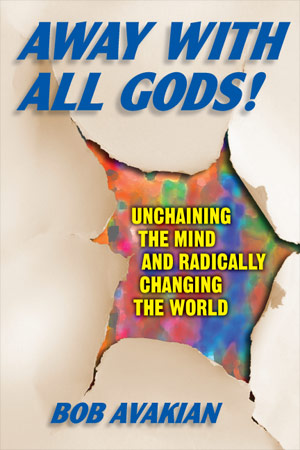 “Bob Avakian has written the first book in years that makes me actually want to re-read the Bible, but this time as freaky horror show, weirded out fiction and gothic nightmare.

“Everyone should read Away With All Gods because it is necessary, critical and timely, but also because it is a book written with joy and humor. Avakian has a whole lot of fun mocking the absurdities of those who should be called ‘god-botherin fools’—never better than when he retells old Richard Pryor routines about Cleveland or reminds us of the hypocrisy of Ronald Reagan as Christian leader while wife Nancy reads the tarot. The trouble is that the people who go in for this religious-fantasy foolishness are serious, and they must be stopped. Avakian shows how and why.

“Pointing out that the myth that Zapata had not been killed and would return to fight again some day was flawed because it overlooked the fact that he was just as dead as was the resurrected Jesus; showing that Mel Gibson’s ‘Passion of the Christ’ movie perpetuates an anti-Jewish slander that the mob killed the son of God; equally critical of contortions such as the one where the Quran is as fair to women thieves as it is to men (‘cut off their hands’ if they do not repent); and skewering Christopher Hitchens’ whose critique of religion is just as much an anti-Muslim tirade (‘God is not great’) as is the US War on Terror; Avakian eviscerates all manner of soft thinking on issues that have a mysterious afterlife in popular thought today.

“Avakian has answers as to why religious fundamentalism (Christian or Islamic) is on the rise, and he does this not with candles and mirrors, dark robes and incense, but rather a philosophico-political analysis and a program for change. These are things we really need to hear.”

“Forceful, scathing, and timely. While I did not personally agree with everything Bob Avakian has to say in this book, I found his arguments cogently articulated and provocatively put forth. Angry, humorous, provocative, and hopeful in equal measure, this was an enjoyable and engaging read.”

—Phil Zuckerman, Associate Professor of Sociology at Pitzer College and the author of Society Without God (NYU Press, 2008)

“‘God’ has been used to justify every kind of atrocity for thousands of years. Bob Avakian says, ‘god does not exist and here’s why.’ This proposition is so radically different from what people around here are told. It makes me want to get a deeper understanding of communism and how everything could be different for humanity.”

“Bold, wide-ranging, down-to-earth, provocative. One needn’t be a Marxist to learn a lot from this work. I especially like the forthright critique of the obfuscating epistemology of religion, and of religion’s appalling consequences for women.”

“When I joined the Black Panther Party we had mandatory readings. This book needs to be mandatory reading for everybody, especially young people, and definitely not put away somewhere in a left-wing literature section. This world is upside down—topsy turvy—and lots of people haven’t actually studied what that Bible says. Bob Avakian has. He exposes the hypocritical bullshit. He brings it down hard and plain, cold and simple. He goes into history and morality. This book is serious reading.”

“Whether readers enthusiastically embrace or reject its claims and arguments, Away With All Gods! is a book that cannot be ignored. This is especially so at a time when religion continues to negotiate a sweetheart deal with leviathan capital, when the Christian Reconstructionist/Dominionist movement tries to seize the helm of the corporate-state-military-media complex, when the apocalypticism of the American empire lurches perilously forward and when religion and capitalism/imperialism become more tightly woven together than ever before.”

—Peter McLaren, Professor, Graduate School of Education and
Information Studies, University of California; and author of
Che Guevara, Paulo Freire, and the Pedagogy of Revolution

“Bob Avakian’s Away With All Gods is more than an apologia for humanism. Well and engagingly written, Mr. Avakian succeeds once again in confronting his reader with authoritative, fact-based challenges to our most basic beliefs. With this kind of thinking and writing, Avakian may just spearhead a return to the Age of Reason.”

“Given the powerful and destructive influence that fundamentalist religion has had on our society in the past generation, the recent books engaging in anti-religious polemic are entirely understandable. What most distinguishes Avakian’s Away With All Gods from other much publicized books of this kind, such as those by Dawkins, Harris, and Hitchens, is the direct connection Avakian makes between combating religious fundamentalism and promoting a radical political agenda. Avakian is also to be commended not only for combining his religious freethinking with an endorsement of the modern Enlightenment tradition, but also for providing a sober warning against “the smug arrogance of the enlightened.” Anyone who has read any of the other books mentioned above should also take the time to read this one.”

Ask for it at your local bookstore or online retailer
Paperback $14.95