We received the following letter from a reader:

5/22/09 - I met Hal Perry a few years ago when I was doing outreach at the Berkeley Public library for Bob Avakian’s memoir, From Ike to Mao and Beyond – My Journey from Mainstream America to Revolutionary Communist. He was with a friend who was researching the Bay Area high school basketball Tournament of Champions. I knew about the TOC through reading Avakian’s memoir and this chance connection led to a political relationship and friendship. 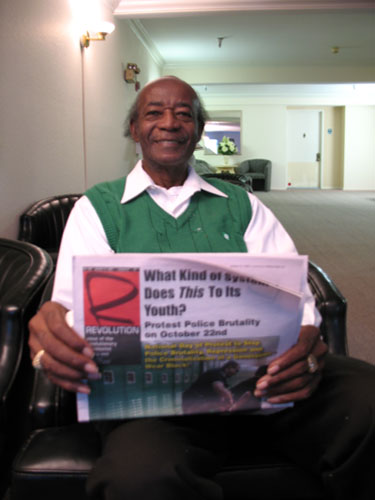 Hal Perry died on April 30, 2009 in the S.F. Bay Area and I’ve been thinking about what a difference he made with his life and what can be learned from it. There are two main things that stand out. The first was his important role in breaking the color barrier in sports, particularly college basketball with the USF Dons. The second was his deep-seated outrage against oppression and his desire to see a better world. He really liked what Avakian had to say, seeing him as an important revolutionary leader, someone who spoke the truth, who stood for the oppressed and who really needed to be known by many more people. He was one of the first people to sign the statement, "Dangerous times demand courageous voices. Bob Avakian is such a voice," for Engage: A Committee to Project and Protect the Voice of Bob Avakian.

I had a lot of respect for Hal and liked him a lot. He had a sparkle to his personality. He was known as someone who liked to talk a lot, prompting his family when he was young to think he would grow up to be either a preacher or a lawyer. He enjoyed being around people and was always ready to tell a story. He liked to joke around and laugh. He was not afraid to speak up for what was right, whether it was popular or not. His memorial was filled with family, friends, college teammates and people who knew him as an attorney. They talked about how they knew him, his endearing qualities, and the impact he had on their lives.

We often talked about politics, the outrage of the oppression of Black people, the need and possibility for revolution and what Bob Avakian had to say about these questions. While there were many things he agreed with, he disagreed about religion and Obama. Hal had a wealth of life experiences and an understanding that Black people’s oppression is deeply entrenched in the workings of this system. When he was a boy in the '30s, Black people were still getting lynched in the South. His young adult life intersected with and was influenced by the tumultuous and exciting period of resistance and political awakening of the Civil Rights movement, the Black liberation movement and the '60s.

Hal Perry was a young adult when Black people began to fight against their oppression and break barriers in all arenas of society. Born in Illinois in 1933, he moved as a teenager to Ukiah, an all-white small town 100 miles north of San Francisco, becoming the only Black family in town. Hal was multi-talented in sports and music, playing basketball, football, baseball, track and field, singing in the school choir and playing several instruments. He was very popular and he became the first African-American class president from 8th-12th grade.

Although he had many friends, he confided that during those teenage years he never went on a date. There were no Black girls in town and it would have been unheard of to ask a white girl out. He later went to a high school reunion where one of the women told him that she would have liked to go out with him, but felt she could not. When it came to breaking racial barriers, dating a white girl would have been unacceptable and perhaps even dangerous.

Even though he lettered in several sports and had been voted Student Body president in his senior year, he never thought he would go to college. This changed after he once visited U.C. Berkeley with his high school band and saw two Black college football players, which convinced him that he, too, could go to college.

He became most well-known as an athlete on the USF Dons basketball team, the first team to win the NCAA (National Collegiate Athletic Association) back-to-back championships from 1955-56. They made history as the first major college basketball team with three African-American starters: Perry, K.C. Jones and Bill Russell. At the time there were only 50 African-Americans at USF out of 3,000 students. Phil Woolpert, the Dons coach was unusual in offering them scholarships when other coaches refused to recruit any Blacks. Russell and Jones were starters and Perry a reserve. But after the Dons lost to UCLA 47-40, a white player who was a starter, selflessly suggested they’d be a better team with Perry as a starter. An unspoken rule was that college teams should have at most only two Blacks out of five starters. Woolpert was warned by other coaches in the California Basketball Association (predecessor of the West Coast Conference) to not have an all-Black starting five. The coach later revealed that he had gotten a lot of hate mail for having the Black starters. An article in Sporting News 1/15/96 called this "a risky move anywhere in 1954."

Hal was a gifted athlete. He was the team captain from 1955-56. A former teammate said, "It was like he was on roller skates sometimes. He was always clapping and jumping up and down and on defense, he was like a mosquito. He bothered everybody." (S.F. Chronicle 5/6/09).  In 1953, K.C. Jones’ appendix burst in the locker room before a game. Hal got put into the game and sank two buckets from almost center court. After Hal was made a starter, the Dons never lost another game for two years on a record-breaking 55 game winning streak.

The team also had two African Americans reserves (also on scholarships) who were often the first off the bench. Hal said Woolpert went through hell and some people wanted to fire him, but didn’t because the team was winning. Woolpert chose the players because he wanted the best players on his team and race wasn’t a criteria. He was derisively referred to by some as "Abe Saperstein," owner of the Harlem Globetrotters, a Black professional basketball team with very talented players who were excluded from the NBA for years due to the racist color line. They were known for playing basketball in a very entertaining and humorous way, clowning and often defeating all-white teams they played. For more on this, listen to Bob Avakian’s talk on the NBA (www.bobavakian.net).

The Dons team members, Black and white, got along well according to Hal and other players. "When they played in Oklahoma in 1955, it was only a year after the Supreme Court ruled on Brown v. Board of Education prohibiting segregation in the schools. Listening to "They sold Postcards at the Hangings," from the Revolution DVD brought back memories for Hal who said, "When Emmett Till was murdered for whistling at a white woman in 1955, we were devastated and felt the same concern. As young Black men, we didn’t know whether they would come after us, or not, for playing basketball in the south.. When we played in Oklahoma, the fans called us "N....,’s" and yelled, "Get those n...’s, off the court!." They threw nickels and quarters at us while we were playing and called us Globetrotters..."

In Oklahoma all the city’s hotels refused to let the Black players stay there, so Hal led a players only meeting to discuss what to do. The white and Black players decided they were all going to stay together, so they stayed in the University of Oklahoma dorms. After they won the game, they celebrated by themselves. Hal said, "The attitude of the fans and the white society overall was that we shouldn’t be playing in the first place. Not only were we playing, but we beat everyone we played against. Our slogan was, ‘Show up and get beat.’ When the other teams lost, their fans finally became very quiet. We were undefeated from 1955-1956."

Another example of their camaraderie came out in a game against the UCLA Bruins in 1955. In a story attributed to Bill Russell, both teams stayed in the same hotel and were in the same dining room for a pre-game meal. The Bruins ate in silence, probably because the coaches wanted them to concentrate on the upcoming game. When the USF squad came in they were "laughing, joking, goofing around and generally being obnoxious," (from Bill Russell by Murray R. Nelson). This unnerved the Bruins to see that the Dons "... seemed totally unconcerned about the game" and "...UCLA was beaten 70-53 before they took the floor."

This team had extraordinarily talented and creative players. A S.F. Chronicle article said they were, "... a team that changed basketball and the country. The Dons opened up the college game by thriving on defense, playing above the rim and scoring off the fast break. More significantly, the Dons were pioneers in integrating the game -- they were the first team to win a national title with African Americans playing central roles." (Bruce Adams 4/3/05 "A Turning Point in college basketball")

Prior to the Dons, basketball was a lot slower and the action was mostly horizontal with a lot of passing and shooting. Before Bill Russell, players usually kept both feet on the ground (rather than jumping) when they shot the ball. Russell had a very effective play where he would block a shot, aim the ball at K.C. Jones (a guard), who would then start a fast break and score.

If other players shot the ball somewhat close to the basket, Russell would make sure it went in. Russell had an incredible backwards dunk, dominated the court and had a very long reach with his arms, enabling him to block a lot of shots. This made it very difficult for other teams to score, which forced them to come up with a strategy of playing around the perimeter of the court. Sometimes players on the opposing team would be awestruck or intimidated by Russell’s playing, causing them to lose confidence that they could defeat the Dons. Russell has commented that he actually couldn’t block all of the opposing teams’ shots, but he made them think he could. After the Dons, the game’s tempo was sped up and became more vertical with dunking and high jumps, which led the way to the way college basketball is played today.

After USF, Jones and Russell became NBA stars and Basketball Hall of Famers. Hal became an Oakland civil rights attorney, who once defended people connected with the Black Panthers.

Hal Perry contributed several statements to Engage, the following is an excerpt:

On "The NBA: Marketing The Minstrel Show and Serving the Big Gangsters," "That’s right, he’s good, that’s fantastic, ooh boy, that’s a powerful statement... I really appreciated hearing this talk. Everything he’s saying about sports, I lived through it... I couldn’t believe how deeply and accurately Bob Avakian described everything. Anyone who listens to this talk is put in a better position to understand what really went on. It’s unbelievable how it describes what happened to Black players. It is so excellent and incredible, I can’t begin to express everything I think about it and I need to listen to it again. If you took a group of high school kids and had them sit down and listen to this, they’d never be the same again."

For the full statement, go to www.engagewithbobavakian.org.