A Riveting Exchange Between Cornel West and Carl Dix

On July 14, 2009, an extremely important and successful program, featuring Cornel West, one of America’s most provocative public intellectuals, and Carl Dix, a long-time revolutionary and a founding member of the Revolutionary Communist Party, USA, took place at Aaron Davis Hall in Harlem, New York.

The event, titled “The Ascendancy of Obama…and the Continued Need for Resistance and Liberation: A Dialogue Between Cornel West and Carl Dix” and sponsored by Revolution Books, was a fundraiser for the bookstore and the Prisoners Revolutionary Literature Fund. It had been billed as sure to be “a crackling evening of passionate and penetrating conversation over matters that many are seriously concerned about but have not dared to discuss out loud and in public.” And this promise was certainly fulfilled. It was a sold-out crowd of 650 people of all ages and nationalities. Over 100 were turned away at the door and many stayed to listen to the program in the overfill area outside. The evening was moderated by Herb Boyd, activist, journalist, and author, and Sunsara Taylor, contributing writer for Revolution.

This was a riveting exchange between two engaging thinkers who are highly concerned about the state of the world and the fate of humanity. West and Dix are both deeply committed to social change—and this was a far-ranging dialogue characterized by both unity and struggle over the nature of the problem and the content of real liberation.

The program included presentations by both speakers as well as a Q&A session with the audience. The topics included, in addition to the role of Obama—police brutality, the oppression of Black people, religion, morality, the role and future of youth, and continuing U.S. wars of aggression.

This was an important opportunity to open up critical space in the context of growing controversy, concern and debate over the character of the Obama administration.

We urge readers to click on the link to listen to this whole exchange and look for further coverage of this event in Revolution newspaper. 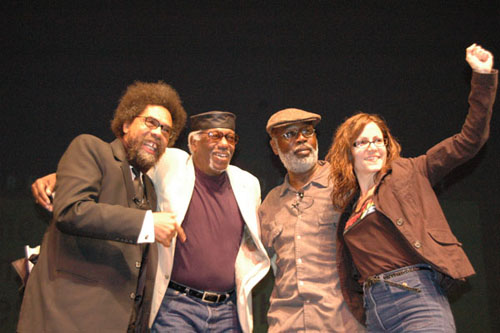