NYPD in the Classrooms:

Turning Schools into Prisons in the Name of "Safety"

Welcome to the youth wing of the New York City prison system, also known as the NYC system of public schools.

In 1998, the NYPD was given authority to ensure "safety" in the city's public schools. What "safety" has meant in reality is the harassment, brutalization, and criminalization of a generation of youth. Today, more than 5,000 civilian NYPD employees, called "school safety officers" (SSOs), and nearly 200 armed NYPD cops patrol the city's schools. SSOs wear NYPD uniforms and can stop, frisk, interrogate, and arrest students. A federal lawsuit filed in January 2010 by the New York Civil Liberties Union (NYCLU) documents numerous incidents of students being handcuffed, arrested, and physically assaulted for minor misbehavior or for nothing at all. 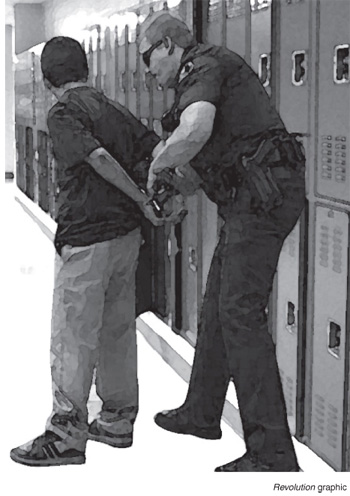 The New York Times' Bob Herbert has also documented some of these incidents ("Cops vs. Kids," NYT, 3/6/10):

In March 2008, a sixth-grade girl and boy at a Bronx middle school drew a line on each other's desk with an erasable marker. SSOs seized the two, handcuffed them, an armed cop interrogated them, and the kids were then hauled away to the local precinct.

In fall 2008, an SSO at a Queens high school kicked in the door of a stall in the boys' bathroom. The student in the stall, who had done nothing wrong, was hit in the head by the door and injured. The boy's family sued the city, and a $55,000 settlement was reached.

In January 2008, a kindergarten pupil was acting up. An SSO handcuffed the boy, who was then taken to a hospital psychiatric ward. As Herbert remarks: "A 5-year-old!"

In filing its lawsuit, the NYCLU noted that "The aggressive policing in the city's schools contributes to the school-to-the-prison pipeline, a disturbing national trend wherein students are funneled out of the public schools and into the juvenile and criminal justice systems. These children tend to be disproportionately Black and Latino..."

Herbert pointed out that "This poisonous police behavior is an extension into the schools of the humiliating treatment cops have long been doling out to youngsters—especially those who are black and Latino—in the city's streets." ("Poisonous Police Behavior," NYT, 6/2/07)

Young women in these schools are frequently harassed and groped by the police. A March 2007 NYCLU report ("Criminalizing the Classroom: The Over-Policing of New York City Schools," nyclu.org) surveyed women students who said officers touched them in ways that made them feel uncomfortable. Women whose underwire bras set off metal detectors, which now exist in most of the city's schools, were forced to raise their shirts or unzip their pants, supposedly to prove they weren't concealing weapons or cell phones.

The creativity, energy, initiative, and rebelliousness of the youth that THIS system crushes COULD be fully appreciated and unleashed—under a whole different system, a socialist society. Those entrusted with public security in this revolutionary society will treat people with respect and do everything possible to help them, instead of acting like an occupation army in hostile territory. And the youth should be a crucial part now of building a movement for revolution.