Overturn the Ban of Revolution Newspaper!

End the Political Censorship and Thought Control at Prisons Nationwide!

Along a remote stretch of California’s spectacular coast line 13 miles south of the Oregon border, sits Pelican Bay State Prison. 3,400 inmates are locked up in this super-max prison. 1,200 of these inmates are incarcerated in the Security Housing Unit (SHU), a notorious isolation unit. 24 hours a day, 365 days a year, these prisoners don’t see beyond the hallways of their cells.1

Revolution newspaper is a lifeline for these prisoners.

In February 2010, Pelican Bay State Prison authorities issued formal notification to RCP Publications that Revolution newspaper is contraband and is therefore banned from that prison altogether. No subscriber will be allowed to receive Revolution. According to the PRLF, the prisoners were not notified until February 2010 that newspapers from as far back as October and November 2009 and all subsequent issues had been confiscated. Meanwhile, another letter from a prison official in California’s Chuckawalla Valley State Prison indicates the ban could be instituted in the rest of the state prison system.

Over the last few years incidents of the paper being withheld from prisoners have been increasing across the country. But this transparently political ban at Pelican Bay prison, with its significant number of subscribers, is a major escalation in the suppression of Revolution newspaper. For over 20 years, the PRLF has made revolutionary literature available to prisoners, including in California. Now the authorities slam the door shut on Revolution reaching its subscribers.

This ban at Pelican Bay (and any other prison) must be overturned. It is illegal, unconstitutional and immoral.

Revolution, and the Revolutionary Worker before it, has been going into Pelican Bay Prison for decades. So why now is it being banned?

To understand this, one must go back to July 2009. At that time, the Revolutionary Communist Party, USA, issued a message and call and launched a major campaign: “The Revolution We Need... The Leadership We Have.” As a part of this, Joe Veale wrote a public letter to prisoners encouraging them to correspond, to speak to the youth who are trapped in dog-eat-dog ways of thinking and acting... and broadly to others, including in the middle strata. Veale called on them to move, inspire and win many, many people to the cause of revolution and to recognize the rare and precious leader we have in Bob Avakian.

And in the summer and fall of 2009, there was a flourishing of letters from prisoners. Three examples of this correspondence, from Pelican Bay and other dungeons, are in the accompanying article. It was clear this statement, and the campaign which it launched, had struck a chord in the hearts of these prisoners.

But that’s not all.

These letters and more were printed in the pages of Revolution and posted on the Internet. The voices of men and women who brave what might seem to be insurmountable odds to speak out from the dungeons where America has locked them up and locked them down were being heard broadly in society. These voices were having a profound effect on those who were listening. These are human beings who refuse to be destroyed, mentally and physically—and who grapple with the biggest questions of the revolution. Prisoners put pen to paper in order to communicate with the world.

Hundreds attended benefits for the PRLF which featured dramatic readings of these letters by a range of professional actors. And still more broadly, people from all strata have read these letters and responded, including with donations. No one should underestimate the impact it can have—and what it means—for people of all sections of society to read and hear what these prisoners are writing. As one Black woman who came to a benefit for the Prisoners Revolutionary Literature Fund (PRLF) said, “This is amazing. The prisoners are so smart and thoughtful and write so well. These are our people saying these beautiful things. It gives me hope.”

Then, in fall 2009, Revolution announced there would be a special issue of the paper focused on prisons and prisoners. (Special Issue on Prisons and Prisoners in the U.S: From the Hellholes of Incarceration to a Future of Emancipation, Revolution #183, November 15, 2009) It contained analysis, both from prisoners as well as regular writers for the paper. At the heart of it was a powerful centerfold with a passage of Bob Avakian’s talk, Revolution: Why It’s Necessary, Why It’s Possible, What It’s All About (available at revolutiontalk.net), which took off from the horrible, dog-eat-dog conditions in prison to show that, yes, another world is indeed possible... and that the wretched of the earth have a central role to play in it. This issue we now know never reached a significant number of prisoner subscribers, especially at Pelican Bay.

And the Ban Comes Down

The letter banning Revolution newspaper from Pelican Bay State Prison in California read, “This letter is to advise you that your weekly periodical ‘Revolution’ will not be delivered to inmates housed at Pelican Bay State Prison. Your periodical newspaper has been determined to be contraband because it ‘promotes disruption and overthrow of the government and incites violence to do so....’”

Disapproval notifications sent to prisoners in February 2010 stated the reason for banning issues of the newspaper as far back as October 2009 was “Incites racial violence and promotes governmental anarchy.”

The ban at Pelican Bay is an egregious act of political suppression based on the content of the newspaper. The discussion of revolution found in the pages of the newspaper is well known and undisputedly constitutionally protected speech measured by Supreme Court decisions on this over the last 50 years.

Who Promotes Racial Violence... And Who Promotes Unity in Struggle Across Racial and National Lines?

The other pretext for the ban—that Revolution newspaper promotes “racial violence”—has no credibility. One prisoner commented, “First off what racial group in particular are they speaking of? In other words to which audience is the paper targeting to incite racial violence when the fact is prison officials are basically the architects of racial disharmony among prisoners.”

Countless letters from prisoners who read Revolution demonstrate it is an invaluable tool in reaching across divisions by nationality and forging of multi-national unity among the prisoners:

I’m currently in one of the three SHU’s in California. I can’t imagine any deeper, darker, or more desolate pits in the U.S. than these.... The SHU “just so happens” to be where they isolate and slam down the most progressive, revolutionary, intelligent and indomitable elements of the prison population. When, by word of mouth or by my political activity on the tier, these cats learn I’m a communist revolutionary with revolutionary literature available for all regardless of race, groups, etc. a lot of them are interested in taking advantage of this opportunity to use this literature....

Let’s talk about who actually has a well-documented history of inciting racial violence. The prison system, especially in California, foments widespread gang and racial clashes as a means to divide and conquer the prisoners and then uses this as a rationale for more repression, brutality and torture against the prisoners. For instance, at the Corcoran SHU in California, the guards literally instigated gladiator type fights—they would take prisoners and whip them into a frenzy against each other, put them in pens and then release them out to fight each other, sometimes to the death.

The Ban Must Go!

A prisoner at Pelican Bay wrote about the ban on Revolution newspaper:

I am...offended by their notion that they are “cultivators” of my mind, that they “water” my mind with their approved books and approved reading and I will “grow” to be an “approved crop” instead of a weed.

We can not let the ban on Revolution stand. A mass and massive political and legal struggle must be mounted to overturn the ban at Pelican Bay. And let’s meet this challenge with the aim of not only overturning the ban—but geometrically spreading Revolution behind prison walls and the words of these revolutionary minded prisoners out into society. Revolution newspaper calls for support for the work of the Prisoners Revolutionary Literature Fund. People can contribute to the fight against the censorship in many ways: raising awareness and funds, developing networks of support, dramatic readings of the prisoners’ letters. The ban must be challenged at Pelican Bay and at other prisons as well, like Menard prison in Illinois (where authorities have placed Revolution newspaper on their “banned literature” list.)

Taking on and waging the struggle against this ban can also contribute, very strongly, to achieving the goals of the campaign, to putting communist revolution, as it has been reconceived by Bob Avakian, on the map in this society; to broadly make known in this society the leadership of Avakian—giving people a sense of and building support for the work he is carrying out, his history and character as a rare and outstanding communist leader… and through strengthening the core of the revolutionary movement and the party that is leading it. 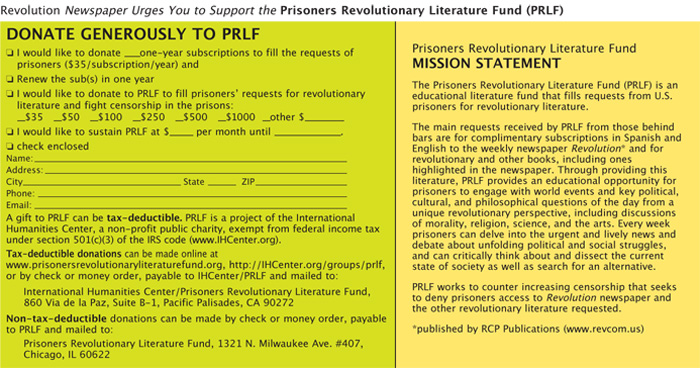