There are new developments and high stakes In the U.S. government’s persecution of Bradley Manning. And a growing movement to defend him.

In April 2010, the video "Collateral Murder" was posted to the Internet by WikiLeaks. It has been viewed over 11 million times. The footage, taken from inside an Apache helicopter in 2007 over Baghdad, shows American troops cold-bloodedly gunning down 11 Iraqis, including two people who worked for the Reuters news agency and a man who had come onto the scene in a van to try to help the other victims. Two small children in the van were seriously injured by the gunfire. The video includes an audio track of voices of the soldiers in the helicopter during the attack. The soldiers can be heard repeatedly requesting and being granted permission to open fire, and joking with each other about the dead and injured victims on the ground.

Six weeks later, the U.S. Army took a 22-year-old private from his intelligence analyst post in Iraq and jailed him in Kuwait, saying that he was responsible for leaking "Collateral Murder." Bradley Manning, a British and U.S. citizen who grew up in Oklahoma and England, was then moved to a Marine prison in Quantico, Virginia, and charged with "illegally downloading and transferring defense information to an 'unauthorized source' and of obtaining 150,000 classified State Department cables, many of which WikiLeaks eventually released."

Bradley Manning spent the next nine months in prison conditions that constituted psychological and physical torture. He faces charges of "aiding the enemy" that could bring the death penalty. On April 25, Barack Obama declared in an interview that Manning "broke the law" even though Manning has yet to be tried—and is supposed to be considered innocent until proven guilty. A growing movement in the U.S. and worldwide is demanding his release. And the stakes of this battle are very high.

From June 2010 to April 2011, Bradley Manning was confined to his cell for twenty-three hours a day—during the other hour, he was only allowed to walk in circles in another room with no other prisoners present. He was not allowed to doze off or relax during the day, and was forced to answer the question "Are you OK?" every five minutes. At night, he was awakened and asked "Are you OK?" every time he turned his back to the cell door or covered his head with a blanket so that the guards could not see his face. At times, he was forced to sleep naked and stand naked for inspection in front of his cell under claims of risk to himself that he himself disputed. ("Private Manning’s Humiliation" by Bruce Ackerman and Yochai Benkler, New York Review of Books, April 28, 2011)

As WikiLeaks posted a torrent of U.S. government documents over the past year, covering the occupations of Iraq and Afghanistan, the detention of prisoners at Guantánamo, and thousands of cables showing the routine domination of other countries through diplomacy, the government began to deal with Manning and WikiLeaks as even more dangerous enemies. ("U.S. Lashes Out At WikiLeaks," Revolution #220, December 19, 2010)

In March 2011, the Army added 22 more charges against Manning, including "giving information to the enemy" for which a military tribunal may put him to death.

Attorney and civil liberties blogger Glenn Greenwald wrote that Article 104 of the Uniform Code of Military Justice, under which Manning is charged—and which carries a possible death penalty—"is incredibly broad." Greenwald wrote that Manning is likely to be prosecuted under provisions of this article which find a person is guilty if he or she "gives intelligence to or communicates or corresponds with or holds any intercourse with the enemy, either directly or indirectly" [emphasis Greenwald's]. ("Bradley Manning could face death: For what?" salon.com, March 4, 2011)

And Greenwald went on to note that "In light of the implicit allegation that Manning transmitted this material to WikiLeaks, it is quite possible that WikiLeaks is the 'enemy' referenced by Article 104, i.e., that the U.S. military now openly decrees... that the whistle-blowing group is an 'enemy' of the U.S." Greenwald cited a 2010 New York Times article that reported "To the list of the enemies threatening the security of the United States, the Pentagon has added WikiLeaks.org...." ("Pentagon Sees a Threat From Online Muckrakers," Stephanie Strom, New York Times, March 17, 2010)

Greenwald also posed the possibility that "the Army will contend that by transmitting classified documents to WikiLeaks for intended publication, Manning 'indirectly' furnished those documents to Al Qaeda and the Taliban by enabling those groups to learn their contents. That would mean that it is a capital offense not only to furnish intelligence specifically and intentionally to actual enemies ... but also to act as a whistle-blower by leaking classified information to a newspaper with the intent that it be published to the world. Logically, if one can 'aid the enemy' even by leaking to WikiLeaks, then one can also be guilty of this crime by leaking to The New York Times."

Julian Assange, founder of WikiLeaks, speaking at a May 25, 2011 press conference in support of Manning, went into the far-ranging implications of prosecuting an alleged leak of information as spying. "It will erect a situation where the collaboration between a source and a journalist is interpreted as a conspiracy to commit crime. And as journalists try to police the national security sector and hold it accountable, the crime will be espionage and conspiracy to commit espionage." For more information, go to the World Can't Wait website at www.worldcantwait.net.

Bradley Manning, so far, is the only person currently charged in revealing evidence of such crimes, but his associates have been questioned and detained while traveling. Three WikiLeaks associates, including a member of Iceland’s parliament who assisted in making the video "Collateral Murder" available, are fighting a court order that Twitter turn over records of their activity to the government. Others accused of being associated with WikiLeaks or Bradley Manning have been subpoenaed to a grand jury.

Intense protest, from within the U.S. and elsewhere, built over six weeks this spring in opposition to how Manning was being punished before trial. Some 400 protesters took the road in front of the Quantico base on March 20—the eighth anniversary of the Iraq war—in protest of Manning being held in solitary confinement, and 30 were arrested.

Law professors Bruce Ackerman and Yochai Benkler demanded that the government end Manning’s conditions in Quantico. "Unless and until it does so, there is only one reasonable inference: this pattern of degrading treatment aims either to deter future whistleblowers, or to force Manning to implicate WikiLeaks founder Julian Assange in a conspiracy, or both." 295 professors of law, sociology, philosophy, American studies, and women’s studies added their names when the letter was published in the New York Review of Books in April.

The United Nations Special Rapporteur on Torture, Juan Mendez, tried to visit Manning, and was denied, saying "I am deeply disappointed and frustrated by the prevarication of the US government with regard to my attempts to visit Mr. Manning." Susan Lee, Director of Amnesty International’s Americas Program, said "Such repressive conditions breach the US’s obligations to treat detainees with humanity and dignity. We’re also concerned that isolation and prolonged cellular confinement, which evidence shows can cause psychological impairment, may undermine Bradley Manning’s ability to defend himself." State Department Deputy P.J. Crowley lost his job in March for saying Manning’s confinement was "ridiculous and counterproductive and stupid."

On April 22, 2011, some Manning supporters staged a surprise protest in the middle of an Obama fundraiser. They videotaped the president claiming Manning was being well treated in prison, and then publicly putting out his verdict before any trial. Obama, supposedly an advocate for rule of law and constitutional rights, said that Manning—who of course has not been tried or convicted of anything in relation to these leaks, "broke the law."

In late April, in the context of the broad, determined and growing protests, the Army moved Manning to the military prison at Fort Leavenworth, Kansas, where he is able to exercise and interact with other pre-trial detainees. He will likely face a preliminary hearing sometime this summer at Fort Belvoir, Maryland, after which he will be formally charged. His military trial could begin in December and run into 2012. A protest outside Fort Leavenworth brought out 250 people June 4. Supporters are planning "Free Brad Manning—Out for Justice!" contingents at gay PRIDE parades around the country this month; and posting thousands of photos and messages on the "I am Bradley Manning" website.

There are tremendous stakes in the case of Bradley Manning. He was imprisoned under conditions that amounted to torture for nine months. He faces charges that carry the possibility of the death penalty for allegedly releasing video and documents that expose war crimes. The President of the United States has declared he "broke the law" before he has had a trial.

And the persecution of Bradley Manning is an ominous move to shut down anyone or any media outlet that exposes the truth about crimes being committed by the U.S. military, or any other outrage.

Anyone who wants to see truth revealed, war crimes exposed and stopped, and justice done must demand that the persecution of Bradley Manning be ended, his charges dropped, and that he is freed. 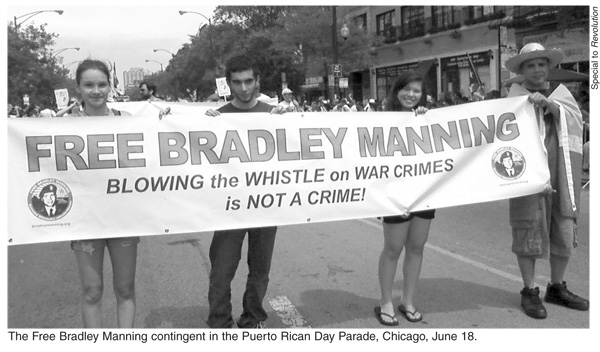