Stories from the Warzone

Activists from around the country came to NYC for 10 days, August 4-14, to Take Patriarchy by Storm and to launch the movement thoughout society to End Pornography and Patriarchy: The Enslavement and Degradation of Women. Below are a few highlights from their early experiences as posted on their blog (stoppatriarchy.tumblr.com). If you want to be part of this movement contact stoppatriarchy.org.

We started with this… 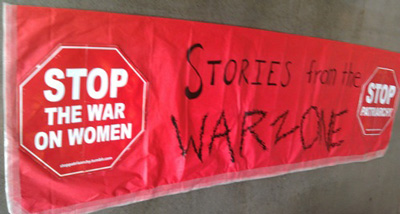 …and took it to Union Square. The idea was to create a banner that grows, as people add their personal stories. Part of the war on women is a deep sense of isolation and shame, which reinforces self-blame. When people don’t know statistics like 1 in every 4 women in this country are raped at least once in their lifetime, it is easy for women to think they did something wrong, feel ashamed, and unable to understand or fight the institutions, advocates, and vendors of violence against women.

Before this starting banner was even complete, we met a woman who contributed this:

The day after the banner was complete, we received approximately 30 stories.  Some are included on stoppatriarchy.tumblr.com.  As this grows, it is building a wall against the false rationale that women are to blame for the WAR ON WOMEN. 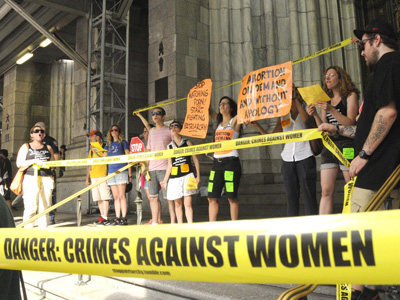 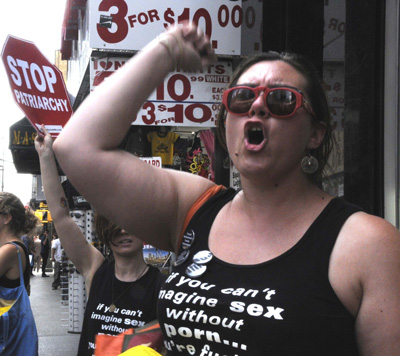 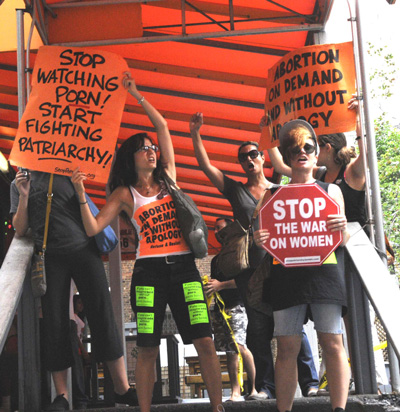 August 4th, 2012. What a day! Taking patriarchy by storm is already becoming a major topic of discussion throughout New York City stemming from the buzz of our first day out. Volunteers began the hot afternoon in Union Square, using an art piece as the focal point for discussions. The piece represents women’s bodies being walked all over by oppressive forces such as the military and the church. It also shows alarming statistics on how the war on women manifests in other countries, as well as here, and especially in the pornography industry. We were met with all kinds of responses. One take on what we were doing was that we simply ‘hated men,’ a common misconception of what bold women are all about.

We were generally met with warmth and gratitude from people thanking us for being out in the public making such a statement that most others are too afraid to make.

It was this great energy that we carried over to Williamsburg with us. The Mad Decent Block Party was our next stop and it brought with it a pretty typical Williamsburg crowd, i.e. 20 somethings with strong opinions and bold style.

Altogether it was an amazing first day. At the very end of the day, we ran into an actual storm which completely caught us off guard and almost destroyed our art piece. With the quick thinking of a volunteer, the piece was saved with a few plastic bags and the storm turned out to be a refreshing, and much needed cooldown. With this being only the first day, so full of positive energy, curiosity, and gratitude, imagine what 10 days of this could amount to…