Sunsara Taylor and others with “End Pornography and Patriarchy: The Enslavement and Degradation of Women” traveled to Charlotte, North Carolina, in the lead-up to the Democratic National Convention to confront the war on women. They confronted the anti-abortion fanatics who had targeted Charlotte’s abortion clinics; they protested outside the downtown strip club which was catering to the delegates; they recruited new activists, distributed palm cards and stickers, and carried a bold banner in the March on Wall Street South.

The group was written up three times in the Charlotte Observer and the following is taken from the LA Times article on protests at the DNC:

Sunsara Taylor, an organizer from New York for StopPatriarchy.org, a pro-abortion-rights and anti-pornography group, said some members of her group went to abortion clinics to escort and protect women from “Christian fundamentalist organizations.”

In addition, she said group members went to a strip club Saturday night to confront delegates who might be patronizing the business. “Strip clubs are part of the war on women,” Taylor said. “A lot of the delegates are embarrassed. I don’t think they like having their claim of being the party of women challenged.”

Activists with "End Pornography and Patriarchy: The Enslavement and Degradation of Women" confront the anti-abortion fanatics in Charlotte, North Carolina. 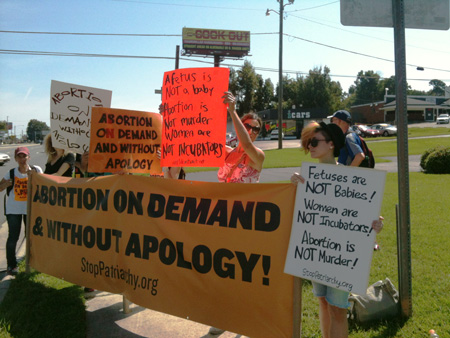