Outside the Democrats’ Convention:

Making “Deadly Choices” or
Stopping the Crimes of Your Government?

The following correspondence is based on interviews with members of World Can’t Wait who participated in the protests in Charlotte, outside the Democratic National Convention. The quotes are from the interviews. 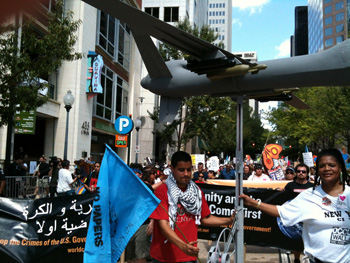 A group from World Can't Wait united with other antiwar activists to create a big visual presence, including a replica of a drone, while protesting at the Democratic National Convention in Charlotte, North Carolina.
Photo: worldcantwait.org 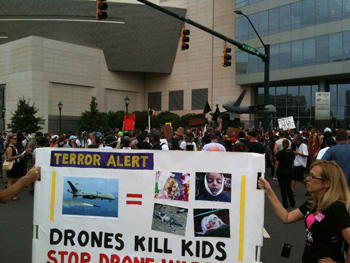 Protests in Charlotte at the DNC challenged convention goers and delegates on the many crimes of the Obama administration.
Photo: worldcantwait.org

A small group from World Can’t Wait united with other antiwar activists to create a big visual presence September 2-4 while protesting the Democratic National Convention in Charlotte, North Carolina. They brought a big replica of a Reaper drone, a weaponized unmanned vehicle, scaled to 1/8 the size of actual drones deployed by the U.S. in Afghanistan, Pakistan, Yemen and Somalia. In the march of 1,500 people, the drone, 12 feet in the air, drew hundreds of protesters as well as media to talk about what World Can’t Wait meant by the “crimes” of the U.S.

One of the contingent organizers said the drone raised the question, “You think our government isn’t committing any crimes under Obama? This is what the people of Afghanistan, Pakistan, Somalia, and Yemen deal with almost on a weekly basis. This thing flies 15,000 feet in the air and has missiles. An operator sitting at a computer at a base in the United States decides which people are ‘insurgents,’ then pushes a button. That group of people gets obliterated. There have been hundreds of drone strikes, and civilians killed, many of them children. While Bush started using drones, Obama escalated it 10-fold and also uses them when he decides every Tuesday morning who he is going to assassinate next.”

The drone, on wheels, was pushed along the march route as delegates began gathering in the days before the convention began. “At one point during the march we were in downtown Charlotte where residents and delegates were on the sidewalk. We spoke about the U.S.’s use of drones. People were listening intently and taking it all in and you could see that they were really grappling with it. It wasn’t like they were getting mad at us, but were trying to process this information. The drone model was photographed over and over again. We were thanked again and again for having the drone model in the march.”

The contingent distributed thousands of palm cards with the image of a child injured by a U.S. drone in Pakistan. “Tell this child the Democrats are the lesser of two evils,” it said. “Regardless of the presidential election results, the next U.S. president will be the commander-in-chief of drone strikes killing civilians; executor of a ‘kill list’; indefinite detention without trial; vast domestic surveillance; and unconstitutional suspension of core civil liberties.” In the march, and on the streets, people considered that information, and some turned from it. “They agreed that drones are a terrible thing, but they’re still really stuck in the politics of the ‘possible.’ It’s like they can’t imagine anything else is possible so they’re making these really deadly choices. There were a few people who flat out refused to take the postcard... they just didn’t want to engage it at all.”

Others embraced the challenge, and acted on what they learned. “A group of young people from Occupy Charlotte came up to our contingent at one point and started chanting, ‘Drone strikes are war crimes, Obama should do prison time!’ We didn’t even think of that... they came up with that on the spot. During an unpermitted march on September 4 in support of accused WikiLeaks whistle-blower Bradley Manning, we could hear people chanting that again.”

World Can’t Wait’s “12 Step Program to Overcome Addiction to Voting for the ‘Lesser’ of 2 Evils” was enlarged into a poster, and later brought to the middle of a large Occupy discussion and cheered. Modeled on the self-help approach of addiction programs, the list got people laughing, including at themselves. “4. Stop lying to yourself. The President is not sucking up to the most powerful interests in the world because he loves you. 5. Cut off all contact with Obama, Holder, Clinton and Pelosi. No more phone calls or writing letters. They are aware of what they are doing and they just don’t care what you think.”

All of this was very controversial. Without the political intervention of this contingent, the September 2 demonstration would NOT have targeted Obama’s expansion of the U.S. wars on Afghanistan, Pakistan and Yemen, or threats to Iran. Last spring, organizers of the coalition to protest the DNC changed their name and mission (from protesting the Democrats and the convention) to the Coalition to March on Wall Street South, “building people’s power at the Democratic National Convention.” The main demand of the march, an appeal to Obama and the Democrats, or perhaps to union members and the Occupy movement, became “Good jobs for all! Economic justice now—Make the banks and corporations pay for their crisis!”

This really does bring to mind BAsics 3:12—“If you try to make the Democrats be what they are not and never will be, you will end up being more like what the Democrats actually are.”

But especially among people in the Occupy movement, who came from around the country to protest, “There seemed to be a willingness and desire to challenge convention goers and delegates on Obama’s U.S. foreign policy, not just to focus on the banks and corporations. One of us interviewed a few of them on video. A young woman talked about how she was disgusted by the thought that she had voted for Obama... she was really aware of the crimes carried out by Obama.”

In addition to the protests in Charlotte, World Can’t Wait and other organizations answered the call of Iraq Veterans Against the War in the San Francisco Bay Area to protest at Obama campaign headquarters around the nation on Thursday, September 6. In dozens of cities, veterans led protests to drop the charges against Bradley Manning, and specifically called on Obama to release Manning from prison.

We received the following correspondence from Chicago: 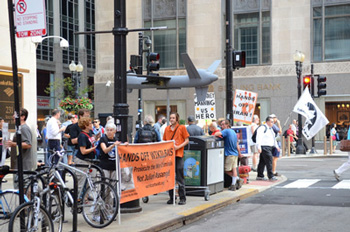 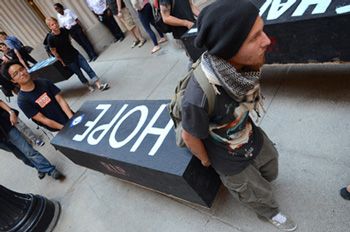 As the Democratic National Convention was beginning in Charlotte, NC, on Tuesday, September 4, protesters in Chicago—President Obama's "hometown"—delivered their own message to his national campaign headquarters. Chanting "B-A-R-A-C-K, how many kids did you kill today?" Occupy Chicago, No Drones Illinois, Chicago World Can't Wait, Vets for Peace, Gay Liberation Network and friends marched from Occupy headquarters through the Chicago Loop carrying black coffins with "Hope" and "Change" in bold white letters to be deposited in front of Obama's campaign office in downtown Chicago. No Drones Illinois brought a large model Reaper drone with a "delivery slip from the White House." The action was controversial in the Occupy movement and in the streets of Chicago, with some people arguing that it was "helping elect Romney." The protesters stood firm and spoke out, many describing how they had worked for Obama in 2008 and now see that he has only expanded wars, drone attacks, and suppression of basic rights. One young woman said, "The system isn't broken, this IS the system" at work, and several Occupiers said they see the only hope is with the people taking action. World Can't Wait's "12 Steps to Overcoming Addiction to Voting for the 'Lesser' Evil" were read to applause and the speak-out in front of Obama's re-selection campaign headquarters continued with passionate debate.