With brightly decorated sound trucks, marches, and outreach into the protests against Arizona’s fascist anti-immigrant law, the revolutionaries were in the streets on May First. They came with style, attitude and the rhythms of drummers and chants:

Everywhere we go
People want to know
Who we are
So we tell them
We are the revcoms
Mighty, mighty revcoms

Their message: The Revolution is Real. They got out tens of thousands of copies of the Message and Call from the Revolutionary Communist Party, USA: “The Revolution We Need… The Leadership We Have” (the focus and pivot of the RCP’s major campaign).

Sound trucks played audio clips from Bob Avakian in his talk, Revolution:  Why It’s Necessary, Why It’s Possible, What It’s All About. Everywhere the revolutionaries went, people encountered something different: “This is NOT the best of all possible worlds… and we do NOT have to live this way.” And, “A WHOLE DIFFERENT WORLD, A MUCH BETTER FUTURE, IS POSSIBLE. WE HAVE WHAT WE NEED TO FIGHT FOR THAT WORLD, THAT FUTURE.

“IT IS UP TO US TO GET WITH IT AND GET TO THE CHALLENGE OF MAKING THIS HAPPEN.”

That night, people celebrated with potlucks, programs, showings of the REVOLUTION talk video, and a vibe that foreshadowed, and demanded, a whole different world.

Across the country, the revolutionaries went to housing projects and places where there has been struggle against police brutality and murder. In one south side Chicago ghetto neighborhood, a young man said, “You came to the right place.” In East Oakland where revolutionaries have been taking out the RCP’s campaign since July, a lot of people driving in the neighborhood honked their horns and raising their fists in support—some lowering their windows and yelling out “Revolution!”

The revolution reached out to college students at places like Berkeley, the district near UCLA, and Union Square in NYC. In Houston, a boldly decorated “Revolution Truck” rolled through the Montrose, a mainly middle class district with many youth and a large gay and lesbian population.

At protests against the Arizona law—from LA to San Jose, from Houston to Chicago—the revolutionaries wore and got out “We are ALL illegals” stickers. And they challenged protesters not to swallow the American flag poison and to cast their eyes to the horizon of revolution, when such outrages will be done away with.

In the San Francisco Bay Area, 4,000 copies of the May First issue of Revolution got out.

Some of the people who helped make May First happen were new to the revolution, including Iranian people who have been inspired by and supporting the upsurge in that country. In Houston, the day ended with singing of the Internationale in English, Spanish, and Farsi. A young man from Puebla, Mexico came looking for the revolutionaries on May 1 in LA after he got a leaflet at the garment shop where he works. A young Dominican woman in New York joined a march outside of a ghetto housing project—she heard about it on Facebook and was outraged by the anti-immigrant law in Arizona. High schoolers in Cleveland came out to help after taking their SAT tests earlier in the day. Told by older, “wiser” folks on the street to get with god, or to go along with the program in other ways, they had different ideas: “Do you think we need change? Do you see the oppression all around and then just sit back and wait? Because that’s never going to change a thing. You need to get active, get involved and be part of this movement!” A student from a prestigious university said participating in her first May First was “dynamic, interactive, and organic.”

Revolutionary May Day in New York City stepped off from a corner in the Washington Heights section of Manhattan just north of Harlem, rolled down Broadway to Harlem past the Audubon Ballroom where Malcolm X was assassinated, past the neighborhood where masses rose up after the police murdered 23-year-old Kiko Garcia in 1992, and through an area with a deep history of resistance and rebellion.

A woman from the Caribbean stopped to watch some of Bob Avakian’s video as it played in a café on May 1. “Why haven’t we heard about this person before?” An older Black woman who heard the speech playing from a flatbed truck in Harlem bought the REVOLUTION talk DVD set on the spot.

A striking new image of Bob Avakian appeared on T-shirts and was posted in scores of windows along the march route.  There was a definite buzz that day about this new image, and, no doubt, more to be heard on this. 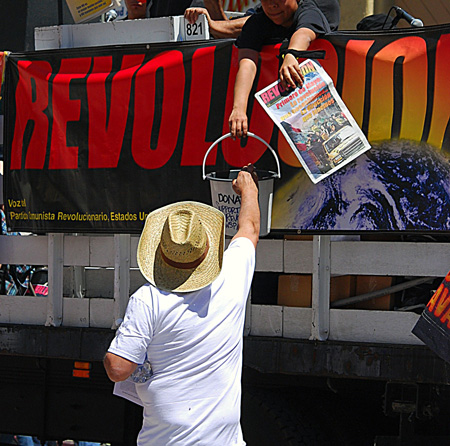