Arizona has passed another reactionary bill, signed into law by Governor Jan Brewer on May 11, that aims to eliminate Mexican-American Studies and all ethnic studies programs in Arizona public schools. House Bill 2281 declares that a school district or charter school in the state cannot include in its program of instruction any course or classes that include any of the following:

And the new law has teeth; any violations of its provisions will be punished by having 10% of their state funds withheld from the school district or charter school.

This new law comes on the heels of Arizona's reactionary anti-immigrant law, SB1070, which legalizes racial profiling by requiring police to stop and question anyone who they suspect is undocumented. That was followed by an announcement by the state's Department of Education that teachers with heavy accents must be removed from classes for students still learning English. Many have interpreted this as targeting immigrant teachers who were first hired under a program to teach bilingual education, a program later abolished as part of the overall anti-immigrant climate. This attack on ethnic studies represents yet another "brick in the wall" of an officially sanctioned white supremacy and American chauvinism in Arizona, while encouraging its spread around the country. Arizona has become an ugly battleground, and testing ground, for a new "Jim Crow," reviving an official second-class status for the 30% of the people of Arizona who are Latino.

The author of this new law is Tom Horne, Superintendent of Public Instruction for the State of Arizona's Department of Education, and Republican candidate for state attorney general. Horne has made it no secret that the law is specifically aimed at eliminating the Tucson Unified School District's (TUSD) Mexican-American Studies program and ethnic studies programs in general. Roughly 56% of the TUSD district's 55,000 students are Latino, and about 3% of the students take these classes, which offer a rigorous course of study that gives students college qualifying credit. But Horne said the new law will put an end to this; it "would ban La Raza (Mexican-American) studies because it's a course that's aimed primarily at members of one race, and we have testimony that this has promoted resentment toward one race." And he also said the law would end other ethnic studies courses as well. [5/1/10 Arizona Republic]

Students "should not be taught that they are oppressed"

Horne has been point-man for a years-long campaign to wipe out ethnic studies classes and courses in the secondary schools. In June 2007, on official state Department of Education stationary, Horne wrote "An Open Letter to the Citizens of Tucson," arguing that the TUSD Ethnic Studies Program should be terminated. He charged that "ethnic studies in the TUSD teaches a kind of destructive ethnic chauvinism…" He said "…students should be taught that this is the land of opportunity, and that if they work hard they can achieve their goals. They should not be taught that they are oppressed."

In other words, in the view of Arizona's Superintendent of Public Instruction the purpose of public education is to tell students what to think—not to enable them to develop the ability to be critical thinkers. "Truth"—for Horne and those like him whose starting point is protecting and preserving this system—is whatever set of ideas correspond to achieving their goals. What is being demonstrated now in Arizona is that raw power dictates what "narrative" about this country's history and present-day reality will be taught—that "might makes right."

Horne's letter went further; it singled out for attack particular books used in the curriculum, including Occupied America: A History of Chicanos by historian Rudolfo Acuña, a book which received the Gustavus Myers Award for an Outstanding Book on Race Relations in North America, and has been used as a standard text in college-level curricula for Chicano (Mexican-American) Studies for many years. And Horne targeted the student group MEChA for attack as well.

State Senator Russell Pearce, author of SB 1070, made this point even more openly in his amendments to a bill in the state Senate, SB 1108—a bill that had nothing to do with education—approved by the Arizona Senate's House Appropriations Committee in mid-April. It would withhold funding to schools, including on the college level, whose courses "denigrate American values and the teachings of Western civilization," and would bar teaching practices that "overtly encourage dissent" from those values, including "democracy, capitalism, pluralism and religious tolerance." Pearce too targeted Mexican-American Studies at the TUSD, and included provisions that would ban student groups like MEChA on any public campuses. The Senate bill would have confiscated books and teaching materials that are deemed "anti-American." Pearce also singled out Acuna's Occupied America, saying it amounted to "sedition." It appears these provisions did not make it into this final law, but they reveal the whole climate around this dangerous offensive.

The origin and importance of ethnic studies

As the national liberation and anti-imperialist struggles of the 1960s developed and a revolutionary current emerged, one powerful expression was the hard-fought student strikes demanding courses, departments and schools of ethnic studies. While the students of oppressed nationalities had to fight just to get into the universities, what they confronted when they got there was an educational system which distorted or suppressed those aspects of history and present-day reality that challenged and put the lie to the bullshit about America's "shining example," and its "special place" in the world. They began at San Francisco State University in 1968, which saw the longest student strike in U.S. history, led by the Third World Liberation Front (a joint effort of African American, Asian American, Chicano, and student organizations of other nationalities). That strike established the first School of Ethnic Studies.

Ethnic studies programs, which later expanded to include women's studies, gender studies, etc., established a foothold where oppressed nationality students especially could for the first time learn about and be part of discovering their own history; the struggle and resistance; and the contributions to art, culture, science, etc. of Black, Chicano, Native American, Asian and other oppressed peoples in this country. This contributed significantly to bringing to light the truth that America's ultimate global domination rested on the foundation of the kidnap of millions and millions of African peoples and their enslavement in the "new world," the genocidal destruction of the Native American peoples, and the theft through war of 40% of the territory of Mexico as the start of a process of conquest that ultimately spanned the globe.

An essential element in the reassertion of the white supremacy and American patriotism on the rise today is the need to restore that "official narrative" about America and its "special role" as the "good guys" in the world. To these reactionary forces, the Mexican-American and other ethnic studies programs on the secondary school and college campuses are an obstacle that must be eliminated.

Whether or not those in power in Arizona succeed in banning ethnic studies outright, the reactionary assault on education that's now been given the official stamp of approval by Arizona's new law is already having a chilling affect on those coming under attack, and it is taking a tremendous toll. In the face of attempts to put them on the defensive, the faculty and administrators have denied the charges against their programs with assurances that the allegations are untrue. Now each teacher entering a classroom will have to teach while looking over one shoulder, facing the choice of self-censorship, or risking state intervention for telling the truth. It is the responsibility of people everywhere to strenuously oppose the whole reactionary offensive that is gaining momentum in Arizona. 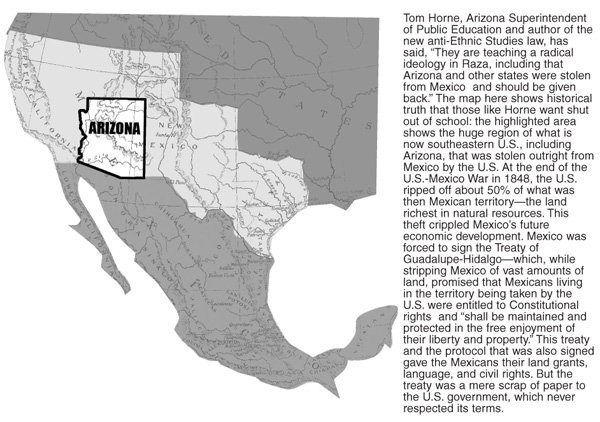