This week significant celebrations of the release of the Constitution for the New Socialist Republic in North America (Draft Proposal) took place in cities from coast to coast. Diverse groups of people of all ages and nationalities—and from at least seven countries—gathered at Revolution Books stores. Just some of the people who came were high school and college students, people from the neighborhoods, ghettos and barrios, teachers and professors, lawyers and scientists. The celebrants included longtime revolutionaries and people completely new to the revolution. Quite a few people came who had received a flyer or seen the promotion for the Constitution online, were provoked by the title and wanted to see what this Constitution was all about. One student expressed basic differences with the revolutionaries, but when asked what drew him to the event said, "If someone goes to the trouble of writing a constitution for a new socialist society, it seems like I should read it, so I came."

The welcoming remarks from the Revolutionary Communist Party focused on the importance of this Constitution. They drew on the document itself and also made the point that "the significance of having this kind of framework for day one, and then beyond after the seizure of power in a country like this, can't be underestimated. This is huge, and those at the core of a movement for revolution need to be living in this themselves…" And, in concluding, the remarks spoke to all in the room: "...wherever you see yourself in relation to this Constitution, and the movement for revolution we are building to bring this society into being... and whatever this Constitution evokes and provokes in you... we very, very much want to hear your response, embarking on and keeping up a dialogue."

At the bookstores that night, the desire to dig into and engage with this Constitution was palpable. Some had read the whole Constitution, while others had read only part of it, and still others were there to get their copy and began pouring over the pages right there.

People clustered in pockets and talked into the night, eagerly raising a wide range of thoughts and questions about what the Constitution says and how the new society would function: how the economy would run, how the new society would move to overcome and do away with the oppression of Black people, about education in the new society, the policy for media which includes funding state, party, independent and oppositional press, and many others. One young woman who'd begun reading it said: "I was surprised at first to read about the executive, legislative, judiciary and so on, but then I thought, yeah, we would be responsible for running this entire society—there would have to be governing bodies. If something is going to be done, the people would have to organize it!" A graduate student who grew up in Mexico was full of thoughts and questions about envisioning a revolution that doesn't consider the current imperialist borders to be sacred. He was especially intrigued by what he had seen online about the seriousness with which this Party and its leadership in Bob Avakian takes the elimination of the oppression of women as a foundational component of emancipating humanity. A number of people who have stepped forward to join the movement for revolution and known the Party for some time wanted to dig into how Bob Avakian's new synthesis, and the principle of solid core, with a lot of elasticity, is being applied to the future socialist society, and taking concrete shape and form in this Constitution.

All in all, this was the opening up of an engagement and dialogue which must continue, deepen and spread.

Throughout the celebrations, ideas flowed about how the Constitution could get out into and be debated in the opinion-making sections of society and in the hidden corners. People spoke to the urgency of getting this Constitution out at colleges and universities (including law schools), in the projects and barrios, in the media and the arts. To maximize the impact this Constitution must have, here and around the world, funds were donated to promote the Constitution; at many of the celebrations upcoming fundraising dinners were announced and tickets to them sold.

These celebrations were spirited, festive—and full of energetic debate over and engagement with this Constitution. They were a good beginning. They drew people forward who, coming from different perspectives and different angles, want to talk about revolution and the ways the world can—and should—be changed. For many, the possibility of a better world took on new—and more concrete—meaning. This Constitution radically challenges everything that people think is possible—and impossible. It can change the way people think about the world. The importance of maximizing the distribution and impact of this Constitution getting out in the world—and the ways in which this model of the future can contribute to repolarizing for revolution—should not be underestimated in any way. 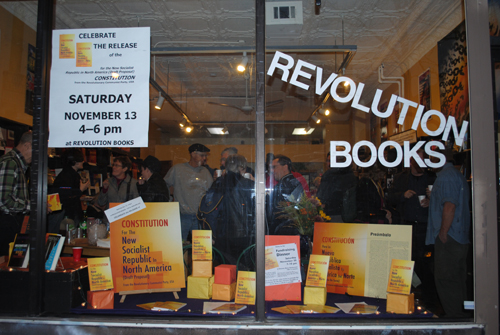