On October 6, hundreds of determined opponents of U.S. wars began occupying Freedom Plaza in Washington, D.C. on the 10th anniversary of the Bush regime’s bombing and invasion of Afghanistan. At the encampment, called Stop the Machine—Create a New World, people from Veterans for Peace, Code Pink, World Can’t Wait, and other organizations mixed with campers from around the country. This coincided with Occupy DC eight blocks away. On October 7, in conjunction with antiwar protests in San Francisco, L.A., and New York City, hundreds marched past the White House to an office of General Atomics, which makes parts for Reaper drones flown by the U.S. to attack targets in Pakistan, Yemen, Somalia, Libya, Iraq, and Afghanistan. The building was closed for 90 minutes by the protest. The next day, a larger march went to the National Air and Space Museum, which displays drones and bombers currently used in U.S. wars of aggression. As the protesters inside dropped a banner, others entering were attacked by guards with pepper spray, and hundreds rallied against the wars. On October 11, seven were arrested at the Hart Senate Office building while protesting the huge U.S., military budget. 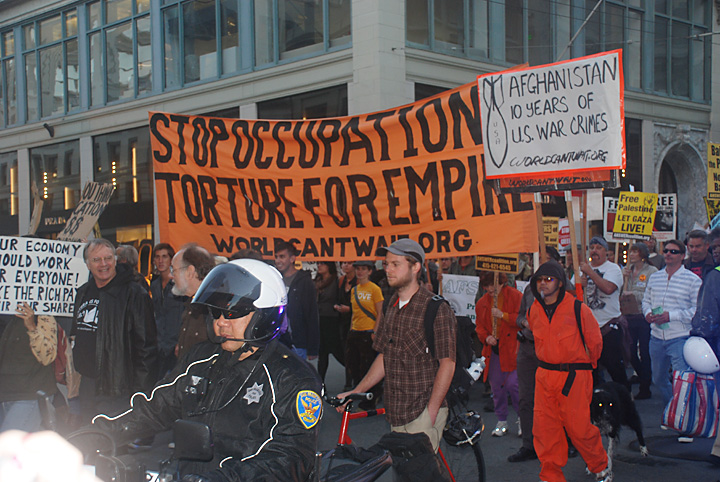