Monday, November 14, Oakland. Sunday night and into early Monday morning several hundred Occupy Oakland supporters gathered at the encampment and in the streets to stand against an anticipated eviction by the police. The mood was tense, and many expected a repeat of the brutal and violent attacks on protests that had taken place in recent weeks.

At 5:00 a.m. hundreds of police in riot gear—including helmets with full face shields, hand-held plastic shields, tear gas canisters, various kinds of rifles—descended on the Occupy encampment, dismantling tents, trashing people’s property, and ripping down banners. Helicopters flew overhead and armored police vehicles blocked intersections. The police erected barricades around the park. Many police had their name badges covered to prevent them from being identified.

Some occupiers remained in their tents to resist while others took to the streets, with about 400 protesters blocking the main intersection. “Occupy Oakland Will Not Die! Hella, Hella Occupy!” protesters shouted at the police who formed a line to prevent demonstrators from returning to the camp. Thirty-two people were arrested including 14 religious people and members of the clergy who refused to leave the encampment and tried to stay in the interfaith tent.

Tuesday November 15. Monday evening, November 14, just 12 hours after Occupy Oakland was evicted, more than 1000 supporters rallied and marched back to Oscar Grant Plaza (officially known as Frank Ogawa Plaza). "We were evicted because we think, because we are willing to envision a different world," one protester said as people gathered for the march. "The eyes of the world are on occupy Oakland and that's why we can't back down," a demonstrator told Revolution.

As the march approached the plaza hip hop artist Boots Riley led a song/chant of "We're not going to take it—any more." When the march arrived at the plaza, demonstrators occupied it for a general assembly meeting to discuss future plans. Occupy Oakland plans to march in the afternoon to UC Berkeley to support the Student/Faculty Strike and a large mass rally on Saturday, November 19.

On Monday the National Lawyers Guild and the American Civil Liberties Union filed an emergency injunction to prevent Oakland from using tear gas and other weapons against protesters. Police have said that they will allow political meetings in the Plaza but that anyone setting up tents will be subject to arrest. Occupy Oakland is intent on reclaiming the space, so the situation remains tense. 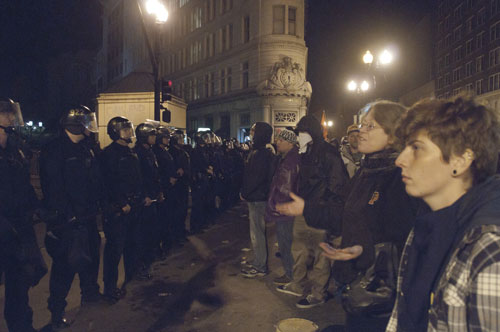 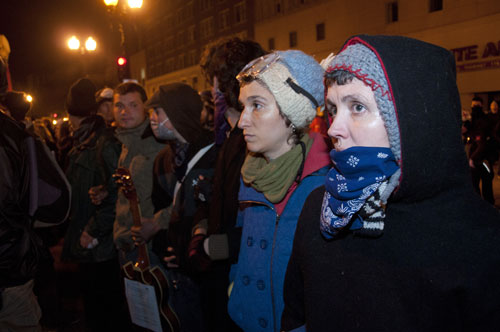 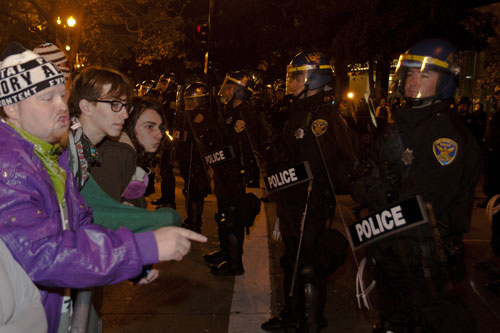 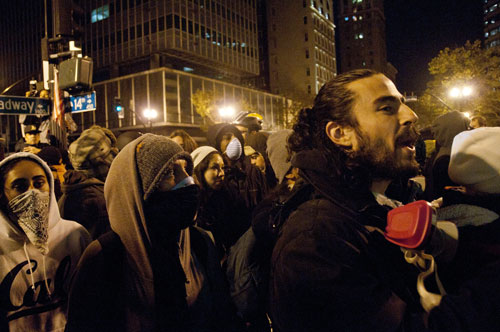 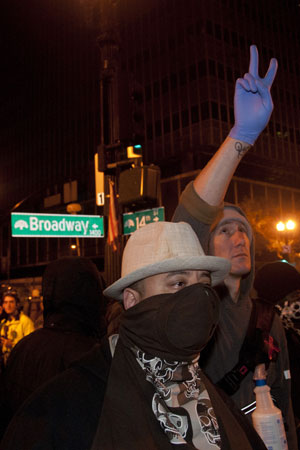