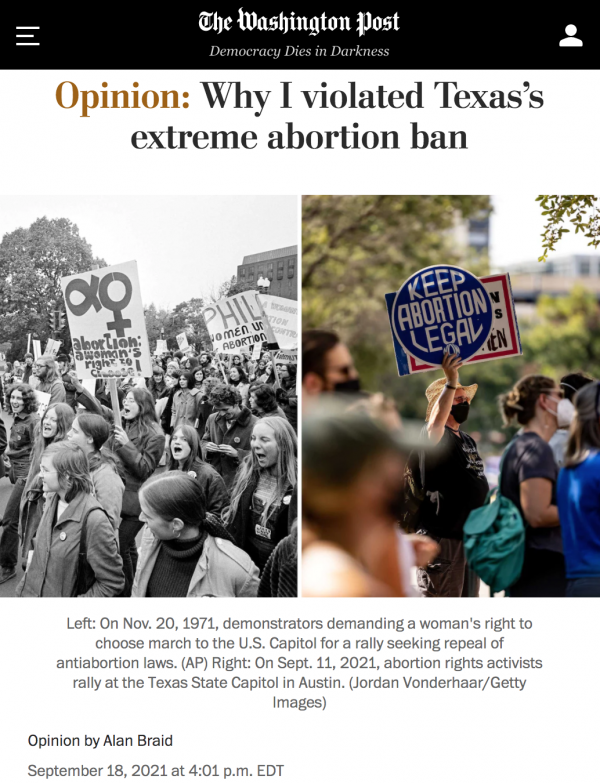 On Saturday, September 18, Dr. Alan Braid of Texas published a courageous and defiant op-ed in the Washington Post broadcasting his righteous decision to publicly violate the Texas Abortion Ban and provide an abortion to a woman who needed one later than the approximate six week limit.

He began by recounting the horrors that women went through before abortion became safely and legally available:

Newly graduated from the University of Texas medical school, I began my obstetrics and gynecology residency at a San Antonio hospital on July 1, 1972.

At the time, abortion was effectively illegal in Texas—unless a psychiatrist certified a woman was suicidal. If the woman had money, we’d refer her to clinics in Colorado, California or New York. The rest were on their own. Some traveled across the border to Mexico.

At the hospital that year, I saw three teenagers die from illegal abortions. One I will never forget. When she came into the ER, her vaginal cavity was packed with rags. She died a few days later from massive organ failure, caused by a septic infection.

The Texas Abortion Ban is in open violation of the 1973 Supreme Court decision, Roe v. Wade, which guaranteed women's right to abortion up until about 24 weeks into pregnancy, but the way it was written has allowed fascist judges to (wrongly) claim they have no standing to stop it from going into effect. The results of this—desperate women turned away from clinics and forced to have children against their will since September 1 when the law went into effect—are already shattering lives.

The way the law was written explicitly prohibits the state or any of its officials from enforcing the law; instead, it deputizes any person anywhere to sue anyone involved in assisting a woman with an abortion (whether that is the doctor who performs the abortion, an Uber driver who takes the woman to her appointment, a rape crisis counselor or family member who offers emotional support to the woman, or anyone else). The courts have used this peculiar feature of the law to claim that the only way this law can be challenged is for someone to be sued for allegedly violating it and then challenge the law in court.

First, he has performed an abortion for a woman who otherwise would likely not have been able to access it, giving her control over her life and future.

Second, he has dared to shoulder the risk and spotlight of defying this gravely unjust law and fighting it in court so that this fascist law can be fought and potentially lifted off the futures and lives of all women in Texas and beyond who are threatened by it. This legal battle must be broadly supported!

Third, and in many ways most important, he has set a standard of courage and noncompliance with a fascist assault on the lives of half of humanity. This example must be learned from and multiplied manifold right now throughout society and in myriad ways. It is not incidental that many of the most courageous, selfless, and committed fighters for abortion rights are those who remember the days before it was legal. Their voices and courage need to be learned from right now and their warnings heeded! People of all backgrounds and walks of life need to publicly denounce and defy this fascist law and wage massive resistance to refuse to allow it to stand. This includes fighting for the October 2 nationwide marches to be as powerful and massive as possible, launching ongoing society-wide protest and struggle (not one-time affairs where people settle back in to a horrific new “normal”).

Dr. Braid ends his op-ed with these words, which we should all learn from and emulate:

I understand that by providing an abortion beyond the new legal limit, I am taking a personal risk, but it’s something I believe in strongly... I have daughters, granddaughters and nieces. I believe abortion is an essential part of health care. I have spent the past 50 years treating and helping patients. I can’t just sit back and watch us return to 1972.