Statement by Bob Avakian, Chairman of the Revolutionary Communist Party, on the Occasion of the Death of Willie "Mobile" Shaw

The death of Willie "Mobile" Shaw is a terrible and bitter loss. Willie wanted his life to be about something--something beyond the dog-eat-dog and the murderous madness this system brings down on people, and catches them up in, in a thousand ways every day. He joined the revolution, became a communist and dedicated his life to the liberation of all people who are oppressed by this system--not just people of one race, or in one neighborhood, but men and women of all races, nations, and languages, all over the world. Most of them Willie had never met, but he came to see that they shared a common fate and could bring a much better future into being. Willie's life is proof that those this rotten system tries in every way to drag down--can rise up; that those the system treats as less than human--can become the liberators of all humanity. 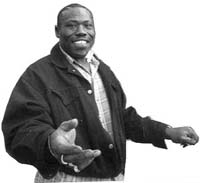 Willie never turned his back on people who had not yet come to see the world as he had come to see it--as it really is; he never gave up on winning them to the fight for a radically different and much better world. Willie brought to the revolution a gigantic heart, a wealth of life experience and great wisdom drawn from that experience. I consider myself very fortunate to have met Willie and spent time talking with him. He asked me many questions--and he helped me learn many things. Willie said to me: "You are the only hope we have." I have kept those words in my heart, with a deep sense of responsibility to live up to them. But Willie, and all the people like Willie in the world, are also the ones who give me hope--they represent the hope of humanity for a better world. Willie's whole life experience, and his all too early death, cry out the need for revolution. And the changes Willie went through, in his all too short life--the way he came through so much to take up the cause of liberating humanity--shout out the possibility of revolution. As our hearts ache over the loss of Willie, let us keep in our hearts, and let us learn all we can, from the beautiful human being that Willie "Mobile" Shaw was and the way in which, in dedicating his life to revolution and communism, he truly made it count, in the greatest way possible.