From the Hellholes of Incarceration to a Future of Emancipation
(Special Issue on Prisons and Prisoners in the U.S.)

Special Issue on Prisons and Prisoners in the U.S.

From the Hellholes of Incarceration to a Future of Emancipation

The United States—the richest and most powerful nation in the world—has 5% of the world's population, but 25% of its prisoners. 2.3 million people languish in prison in the country that brags of being the "leader of the free world."

These prisons are hellholes. Prisoners are subjected to maddening, mind-crushing torture in the form of isolation chambers. This kind of mental torture is considered a war crime when carried out against prisoners of war, but the U.S. inflicts this on tens of thousands of ordinary prisoners within its penal system. Prisoners are manacled, maced, tasered, and chained. They are set against each other, gladiator-style, in gang wars for the amusement of the authorities. Rape is used as a means of social control on prisoners, both women and men.

Sidebars to the Article:

Greetings and a clenched fist comrade salute to all you brothers and sisters. I write you from a dungeon known as California's supermax prison "Pelican Bay."  This country is undergoing a dramatic "facelift" in its political arena, the blatant disregard for humanity that Bush II displayed forced the ruling class to dig deep in its trump chest so that once more the people can be corralled into their Bourgeois politics with all the false hopes and empty promises that come with it. Thus the need to bring to light the cold truth is needed now more than ever.

Some Thoughts on "The Revolution We Need…The Leadership We Have"

Revolutionary greetings! I just received issue number 170 and so I wanted to express some of my thoughts of this issue, "The Revolution We Need... The Leadership We Have."

First what was powerful was when I opened up the paper and seen the vivid uncut portrayals in the pictures of America's dirty work. To see the collage of horror all together was a powerful message. And I could relate to many of the pictures, the picture of the police smashing a Black youth's back with his knee. I have been in that exact position more than once, out in society and here in American gulags. In the barrios or ghetto projects, police brutality is a fact of life and begins as a right of passage to youth of color, police brutality is used as a mechanism of control to the potentially rebellious youth of color and it is taught at an early age, it becomes an unwritten rule that the lumpen know all too well, like the rule that if you run from the police if caught you will get beat.

Circulating Revolution and Literature by Bob Avakian in the Prison

Excerpt from a letter received several years ago:

Before I get into these issues, I'd like to express and extend my appreciation towards Bob Avakian for speaking directly to us in Revolution No. 11 and really motivating, inspiring and orientating us to develop ourselves ideologically and politically as not merely "revolutionaries" but communist revolutionaries. He noted the crucial role prisoners need to be playing in spreading the message of communist revolution and MLM [Marxism-Leninism-Mao Tsetung Thought] throughout the prisons and getting the word out to our homeboys and homegirls and families on the streets as part of raising class consciousness and helping build and strengthen the revolutionary movement and contributing to the resistance. Those of us who are trapped under the gun, and those loved ones who are connected to us on the streets ensnared in the barrios and ghettos, need to get with the revolution, study MLM and learn about and promote the leadership of Bob Avakian.

The Scandal of Women's Prisons...
And the Shackles that Bind Half of Humanity

In 1995, a young boy named Philip Gaines wrote a letter to the President of the United States.

"Dear President Clinton," Philip wrote. "I hope you can free my mom .I need her. Because I am just a little boy! I am just ten year old. I need my mom very much. Please get her out I need her."

You're supposedly alive... but you're trapped in a tiny, bare, silent tomb-like cell for 23 hours a day, robbed of sensory stimulation that human beings thrive on.

No window to the outside world, no way to see if it's day or night, winter or summer.

From the Revolution Talk by Bob Avakian

A Better World Is Possible

Ideas develop and are applied in relation to the material and social conditions people face, the ways in which people interact with each other and with nature. So for capitalism, and every system based on exploitation and oppression, the only kinds of ideas it can produce and the kinds of ideas it promotes as the ruling ideas, are, not surprisingly, ideas that justify all this exploitation and oppression, that teach people that this is the natural order of things and that encourage people to try to become big dogs in this dog-eat-dog world. If this kind of world, this kind of system, if this were all that is possible, that would be one thing. And you see people, even those who are brutally oppressed under this system, as long as they believe this is the only kind of world that is possible, you see them going along with this all the time. I gotta get mine. I gotta get what I can get within this. It's time to get yours. 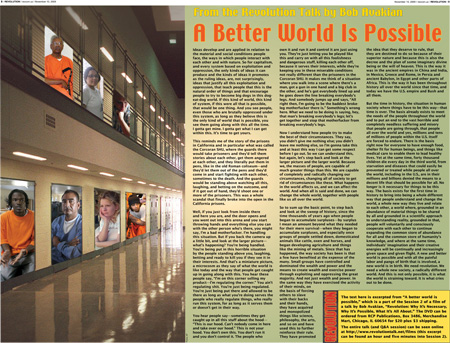 Conditions in ICE Detention Centers... A Death Sentence For Over 100 Immigrants

The number of undocumented immigrants who are detained by ICE (Immigration and Customs Enforcement) has tripled since 2001. This year ICE is on a pace to imprison approximately 440,000 immigrants. These are people held, in most cases, without criminal charges. They are overwhelmingly denied access to attorneys—or even telephones. They are transferred from prison to prison without notice or warning, making communication with attorneys, doctors, friends and family impossible. And all this is covered up, out of public sight –in private detention centers that provide filthy and unhealthy food, beatings, and criminally negligent medical care.

It's Right to Fight Against Oppression!

Political Prisoners in the U.S.

The U.S. rulers go around the world masquerading as opponents of injustice and political repression. But inside the U.S., there are political prisoners who have been incarcerated, many for decades, for standing up and resisting against the crimes of the imperialists around the world and here in this country. Most of them are Black and Latino, some are white. Hundreds of activists with the Black Panther Party and other revolutionary organizations were targeted by the COINTELPRO political police in the 1960s and early 1970s. Some were assassinated, and many others were locked down in America's dungeons.

On September 9, 1971, enraged prisoners seized a New York prison called Attica, and surrounded by the armed authorities, held it for four intense and liberating days. "The entire incident that has erupted here at Attica is . . . [the result] of the unmitigated oppression wrought by the racist administration of this prison. We are men. We are not beasts, and we do not intend to be beaten and driven as such… What has happened here is but the sound before the fury of those who are oppressed…"