Behind the Silencing of Helen Thomas: Covering Up and Carrying Out Great Crimes

In an article I wrote on the massacre on the Mavi Marmara ("An Outrageous Massacre to Enforce Horrific Crimes," Revolution issue 203, online at revcom.us), I argued that these killings were carried out to enforce an even greater horror, the slow (or not so slow) strangulation of the 1.5 million people in Gaza by Israel's blockade, a blockade backed up by the USA. In a similar vein, the silencing of one of the very few principled, high-profile U.S. mainstream journalists, ostensibly over a comment she made when a pro-Israel rabbi stuck a camera in her face for an "interview," serves those same ends, and must be protested and opposed.

Before turning to the incident that supposedly precipitated all this, let's note Helen Thomas's actual transgression. In the wake of Israel's slaughter of human rights activists trying to break the blockade of Gaza, Helen Thomas had the audacity to say the obvious, and ask the question everyone should have been asking. She told White House Press Secretary Robert Gibbs, "If any other nation in the world had done it, we would have been up in arms," and asked: "What is the sacrosanct, iron-clad relationship where a country that deliberately kills people and boycotts—and we aid and abet the boycott?"

I wondered how long they were going to let Helen Thomas ask questions like that.

The next day all hell broke loose, ostensibly over another quote from Thomas that she made in the course of a "stick-a-camera-in-your-face" interview by Rabbi David Nesenoff of RabbiLive.com outside the White House's May 27 Jewish Heritage Celebration.

Now, there are a lot of things you can say, and the powers-that-be and their media and censorship machinery are fine with that. Rand Paul, the darling of the Tea Party Movement and yes, now the Republican Party establishment, can say he wouldn't have voted for the Civil Rights Act because it infringes on the rights of private businesses. And anyone who is offended by that is supposed to quit whining and get a thicker skin. Barack Obama can "joke" in front of the entire Washington press corps that if anyone in the band the Jonas Brothers tries to date "his" daughters, he has 2 words for them: predator drone (the missiles the U.S. uses to wipe out homes full of people in the Middle East from Afghanistan to Yemen)… And anyone who thought that was sick, sadistic, violently patriarchal, and a celebration of cowardly death from the skies was, I guess, supposed to "get a sense of humor."

But let Helen Thomas, the now-forced-out Dean of the White House press corps, say that Israel should "get the hell out of Palestine…" and within hours, Hearst News Service announced her (obviously forced) "retirement." The White House Correspondents' Association—which slavishly accepted and fed the nation Bush's "weapons of mass deception" lies (and then "moved on" when those lies were exposed)—rushed to denounce Thomas. Her speaker's bureau fired her.

Throughout the dark ages of the Bush regime, Helen Thomas stood out, and stood pretty much alone, among mainstream journalists in challenging torture and lies. Four years ago, she asked Bush's Press Secretary Tony Snow a question at a White House press conference that suggested the U.S. supported "collective punishment for Lebanon and Palestine," and this was met with the response: "Well, thank you for the Hezbollah view" (a response that both framed any questioning, dissent, or opposition to Israel and the U.S. as being "with the terrorists," and served as a warning/threat that anyone asking such questions risked being treated like "the terrorists").

And Helen Thomas has had the principles and integrity to refuse to go silent when the Obama administration has continued to carry out endless war and shred civil liberties. In February, Thomas asked Obama at a press conference (framed by saber rattling around Iran) if he knew of any Middle Eastern state with nuclear weapons. An awkward question since, while the U.S. is moving belligerently towards Iran's nuclear program (which so far has yet to produce a single weapon), they enabled and protect Israel's massive nuclear arsenal.

Overtly forcing out the widely admired, 89-year-old "Dean of the White House Press Corps" for asking these embarrassing questions about Israel's crimes, its nuclear arsenal, and the U.S. role in all that might further focus a spotlight on those very questions.

But the ruling class, through the media and its instruments of regulating journalism, did seize on a casual exchange with a pro-Israel rabbi outside a White House celebration of Jewish heritage to silence and discredit Thomas, and also to confuse the nature of Israel, and the U.S. role in backing it.

Accounts of the exchange characterized Thomas as saying that Jews should go back to Russia and Poland, but Thomas initially directed her criticism at Israel. She was asked for her comments on "Israel," and said, "Tell them to get the hell out of Palestine." It was the interviewer who reframed things in terms of "So you're saying the Jews should go back to Poland and Germany?"

While a lot of the focus of attack on Thomas was formulated in terms of accusations of anti-Semitism, what really set off some, including forces who claim to be, or are, "progressive" on other issues, is that Thomas' comments did objectively raise questions about the nature of Israel. For these forces, it's OK for liberals or progressives to criticize some of Israel's most egregious crimes—a bit. But you cannot even ask questions that might raise for examination the actual nature of Israel—that question the right of this state to exist on stolen Palestinian land. Writing at Huffington Post, for example, Hani Almadhoun called Thomas's comments "wrong and hurtful" and complained, "Had she been talking about the militaristic Israeli occupation then her remarks would make a lot more sense. But her untactful remarks have so many plausible meanings that it troubles me a journalist who has a gift of words would make such an ambiguous statement." ("Helen Thomas, Old Journalism Ambushed by the New One," 6/8/10).

But what about the truth? First, it is a fact that most Jewish people in Israel are from Europe, or descendants of people who immigrated from Europe, living on land seized through terroristic ethnic cleansing of the Palestinian people. And Helen Thomas was accurate to say, "Remember, these people are occupied, and it's their land, not German and not Polish."

Jewish people who resent being resented for Israel's crimes (like white people who resent being blamed for white racism and the history of the oppression of Black people in this country) need to loudly and unequivocally speak out against Israel's crimes. And you can and must refuse to let the same imperialist system that carried out the holocaust (German imperialists, while the other "great powers" essentially stood by because it wasn't in their strategic interests to make an issue out of it at the time) now justify Israel's crimes on that basis.

Backing Israel, a widely despised Zionist state in the Middle East, poses real contradictions for the rulers of the U.S. This is acutely the case now, when they are trying to cobble together alliances with various forces, including Islamic forces, in Iraq and Afghanistan, as part of their endless war to enforce U.S. domination in a geostrategic part of the world. But Israel plays a unique, and strategic role as an enforcer for U.S. interests in the Middle East and beyond, and whatever tension is involved in that, this is a strategic relationship that the U.S. finds essential. And this is the case even when Israel does things that in the short term are problematic for the U.S. (for a concentrated analysis of the relationship between Israel and the U.S., see "Bringing Forward Another Way" by Bob Avakian, at revcom.us, particularly the section "Israel and Its 'Special Role' in Relation to U.S. Imperialism").

In a speech in the aftermath of the massacre on the Mavi Marmara, I surveyed two defining moments in the history and role of the state of Israel—military and technology support for the apartheid regime in South Africa, and Israel's indispensable role in the slaughter of some 180,000 Mayan villagers in Guatemala in the early 1980s—horrific crimes carried out in service of the U.S. empire. And I argued that “[W]henever there is something too obscene, too bloody, too obviously immoral, that if the U.S. did it, it would look bad, it would alienate people, and work against the strategic objectives of U.S. empire the U.S. can always count on Israel.”

All of this is why Helen Thomas' questions were ruled "out of order."

Anyone who is against censorship, who values critical thinking and the right of journalists to speak out and voice their opinion—must take a stand against what has been done to Helen Thomas.

And anyone with a sense of right, wrong, and the truth should feel compelled to dig deeply into why "our" government covers up and censors basic truths about Israel, and what that reveals about the whole global setup. And then to act politically against Israel's crimes. 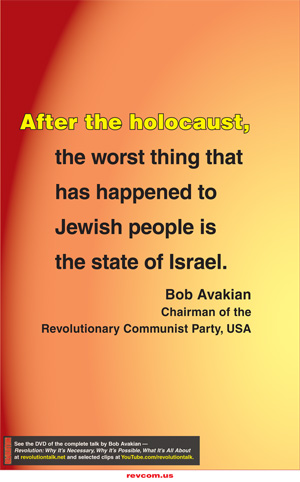