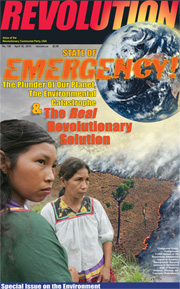 The following are some key principles of socialist sustainable development, which appeared as part of the special issue of Revolution newspaper on the environment (Issue #199, 4/18/10, revcom.us/environment). These principles, though not exhaustive, concentrate an orientation that enables socialist society to begin to tackle the environmental emergency with a global and internationalist perspective. In putting these principles before people today, we hope to open up debate and discussion that can contribute towards raising understanding of what we are confronting—and raise sights about the viability and desirability of communist revolution.

The socialist state must use its strengths and resources to promote revolution. The new socialist state must be a “base area” for the world revolution. The emancipation of humanity demands this. The preservation of the planet demands this: for humanity to deal with the environmental crisis on the requisite scale and with the requisite urgency requires a totally different economic and social system and set of values. That requires socialist revolution and the spread of that revolution.

The new socialist society will put the interests of the preservation of the ecosystems of the entire planet above its own national development. It will encourage and give scientific, technical, and organizational backing for bold international initiatives to prevent widespread ecosystem collapse of coral reefs, rainforests, critical savanna regions, etc.

The new society will share scientific knowledge and technology with the rest of the world. It will contribute research to aid other parts of the world in dealing with various aspects of the environmental emergency—for instance, helping populations in low-lying poor countries deal with rising sea levels and flooding resulting from climate change.

Such initiatives will require unprecedented planet-wide cooperation of scientists and others, engagement of diverse populations and systems of governance, and the involvement of local communities. And the socialist state will seek to learn from the experiences, insights, and struggles of people around the world.

But for such initiatives to be truly effective and take hold over the long term, more of the world will have to break out of the capitalist stranglehold. Capitalist growth and development lead to massive environmental degradation. In the face of economic dislocation and societal breakdown, impoverished and desperate populations in vast parts of the world resort to environmentally destructive activities in order to survive. Civil wars fanned by the imperialists ravage land and water resources.

All of this emphasizes, again, why the new society must spread socialist revolution as far and wide as possible—and as fast as possible.

In its international relations, the new socialist society cannot be based on exploitation and plunder.

A revolution in the former United States will put an end to the pollution-intensive, cheap-labor, global manufacturing grids of production. The structure of production and the resource base of a new socialist economy will no longer rely on labor and materials from other countries—like cheap parts from hellish factories in Mexico and inflows of oil from abroad. The new society will provide technical and financial assistance for helping to clean up environmental damage in other parts of the world caused by the energy and mining operations, agribusiness and forestry, and industrial activities, as well as the export and dumping of toxic waste, of the former U.S. empire.

The new socialist state will immediately dismantle all military bases and occupations. It will vastly downsize the military industry and begin to convert huge components for productive, social use.

B. Consciously Planning and Regulating Growth; Protecting and Preserving a Variety of Ecosystems to Prevent Environmental Collapse and to Ensure the Health of the Planet for Future Generations

In place of the blind and environmentally reckless expansion of capitalism, a socialist sustainable economy will seek planned, regulated growth informed by:

This overall orientation will not only influence the specific mix of what is produced and how it is produced in the new socialist society. This orientation will influence levels of output, including decisions to consciously restrict or cut growth in particular sectors contributing to climate change and straining the planet’s ecosystems, and curbing the use of certain resources that are dwindling.

C. Transforming the Structure of Industrial Production, Agriculture, and Transport

The new socialist society will set out to transform the environmentally destructive structure and functioning of today’s imperialist economy:

D. A Different Kind of City and Social Fabric

Given their privileged position in the global division of labor, the imperialist countries have evolved in a certain way. Their economies, and where people work and live, depend on high levels of mobility, the automobile complex, and long-distance, energy-intensive supply chains.

The system of production in a sustainable socialist economy cannot be focused on this kind of supply and delivery system. It must aim towards a system of interchanges within local and regional economies functioning as part of a unified socialist economy.

Cities must become more sustainable—more capable of producing more to meet basic needs and requirements, including efforts to develop local urban food production. The huge and wasteful consumption of energy associated with the parasitic commercialization of the contemporary city—office structures serving global financial invest-ments, advertising, insurance, etc.—will be transformed. The kind of intensive and speculative commercial and residential development encroaching on “green spaces” in the areas outside of cities, in suburbs and “exurbs,” will be put a stop to.

Economic-social planning will strive to connect work that is meaningful and creative with people’s sense of community—and forge new relations between work and where people live. Planning will seek to create a new kind of “social space” in the cities, where people can interact, organize politically, create and enjoy culture, and relax. At the same time, planning must seek to break down the distinctions between the cities and the outlying suburban and rural areas—and find new ways to integrate the economic and social activities of these adjoining regions.

A sustainable socialist economy in the former United States will strive to produce a rational variety of consumer goods. But this will not be the same “consumer society” (it would take the resources of almost five earths if the rest of the world had the same ecological footprint of the average person in the United States).

Consumer goods must be functional and durable (not the “used once and thrown away” of today). Society will pay attention to changing demand, taste, and aesthetic. But there will not be the same obsession with private consumption, with the need to define yourself on the basis of what and how much individuals own and consume. This will be a matter of education and ideological struggle in society.

With the transformation of social life—with the creation of more “social space” allowing for richer and more meaningful connectedness among people—new values can take hold. With people gaining greater awareness of humanity’s connectedness to nature, and of the ecological cost that imperialist “consumerism” has exacted, attitudes can change.

F. Valuing the Planet, Becoming Caretakers of the Planet

There is an ecological imperative for us to care about and value the planet. We depend for our survival on the natural world, from green plants that produce oxygen to other living species that provide food and medicine; we cannot live without fresh water, nutrient-rich soils, and clean air. At the same time, we are linked with the natural world: through complex evolutionary chains and through networks of ecosystems that provide flows of energy for life to maintain itself.

There is a moral imperative to care about and value the planet. We must strive to become the stewards of the planet: protectors and enhancers of the natural world of which we are part, and with which we are always interacting and transforming. Knowing more about our connections with the natural world and our responsibilities to it also enriches us as human beings.

There is an urgent time line to act: if we do not protect and preserve fast-vanishing natural ecosystems around the world, if we do not move to stem climate change, this planet could very well become uninhabitable for billions of people, and possibly all of humanity.

This is our orientation. Revolution makes it possible to live lives worthy of human beings and to protect the environment. It is why socialist revolution, and the creation of a new socialist state in one or several countries, would have an incredible effect on the world. The establishment of even one new socialist state—especially in a significant country, in terms of geography and population—would dramatically change political alignments in the world. It would give hope and inspiration to people throughout the world. This heightens our determination to make that revolution and to call on others to join and contribute to this most vital undertaking.