Revolution newspaper is proud to present:
Introductory Explanation:
On the Nature, Purpose and Role of This Constitution

From the Revolutionary Communist Party, USA

This Constitution (Draft Proposal) is written with the future in mind. It is intended to set forth a basic model, and fundamental principles and guidelines, for the nature and functioning of a vastly different society and government than now exists: the New Socialist Republic in North America, a socialist state which would embody, institutionalize and promote radically different relations and values among people; a socialist state whose final and fundamental aim would be to achieve, together with the revolutionary struggle throughout the world, the emancipation of humanity as a whole and the opening of a whole new epoch in human history–communism–with the final abolition of all exploitative and oppressive relations among human beings and the destructive antagonistic conflicts to which these relations give rise.

In order to bring this new socialist state into being, it would be necessary to thoroughly defeat, dismantle and abolish the capitalist-imperialist state of the USA; and this in turn would only become possible with the development of a profound and acute crisis in society and the emergence of a revolutionary people, in the millions and millions, who have the leadership of a revolutionary communist vanguard and are conscious of the need for revolutionary change and determined to fight for it. To work for this objective–to hasten while awaiting the emergence of these necessary conditions, with the goal of revolution and ultimately communism clearly in mind–is the strategic orientation of the Revolutionary Communist Party, USA. And, as one important part of giving life to and carrying out this strategic orientation, we are publishing this "Constitution for the New Socialist Republic in North America (Draft Proposal)": as a contribution to a process in which growing numbers of people are seriously considering and grappling with whether, how, and in what form there could be a real alternative to the present capitalist-imperialist system and the unspeakable suffering and depredations it imposes on the great majority of people in the world, on humanity as a whole, as well as on the environment and the webs of interconnected species which inhabit this earth; to provide a more concrete sense of the basic nature, structure and functioning of the socialist society, and its government, envisioned here, and the principles and objectives underlying and guiding this; and to enable people to see, sharply outlined, what is in reality the radical difference between the society and government envisioned here and the capitalist-imperialist system which currently rules in this country and exercises domination over the world as a whole, with such terrible consequences.

The term "New Socialist Republic in North America" has been chosen not because that would necessarily be the name of such a socialist society, brought into being through revolution in this part of the world (the formal name would of course be decided at the time of the actual establishment of such a socialist state); rather, this term is utilized in order to emphasize that this is intended as a proposal for the Constitution of a socialist state as it would have been newly brought into being, in the first stages of its existence, with the victory of the revolution that would have put an end to the imperialist USA and replaced it with a new, revolutionary society on the road of socialism. And, while we have sought to indicate here, as much as possible, the basic principles, institutions, structures, and processes which would characterize this new socialist society, and particularly the functioning of its government, much of the specific features of this would naturally be influenced by the situation that existed at the time of the establishment of this new socialist state–including factors such as the size of the territory that had been liberated from the imperialists (and other reactionaries) and consolidated as the territory of the new socialist state, and what overall situation prevailed, particularly in terms of the struggle between revolutionary and reactionary forces, in this part of the world, and in the world overall, at the time of the founding of this new socialist state. Some of this is spoken to in the Constitution (Draft Proposal) that follows, but there are clearly aspects of such a future situation which can be anticipated only in broad terms, and others which may arise which cannot at all be anticipated now. Nevertheless, it has been our purpose, and we have striven to the best of our ability, to put forward as clearly as possible the basic principles that would be embodied in a Constitution for a new socialist state in North America, and much of the specific ways in which these principles would be applied, in order to enable and encourage people to engage, in a serious and substantive way, with the vision that is put forth here of this new socialist state and the potential for a radically different society and world that it represents. For, again, that is our purpose in publishing this Draft Proposal: to stimulate, as broadly as possible, such serious and substantive engagement with this Draft Proposal, and vigorous discussion and debate about what it puts forward as the kind of society and world to be not only imagined but actively struggled for.

A final point. As a Draft Proposal for a Constitution for a new socialist state, this document focuses on and is primarily concerned with addressing the purposes, nature, objectives, and functioning of the government in this new society and does not attempt to discuss to any great depth the philosophical-ideological and political-strategic thinking regarding the necessity and basis for, and the means for bringing into being, such a state. For more background in relation to this, we strongly recommend the talks and writings of the Chair of our Party, Bob Avakian, as well as other Party publications, including: Birds Cannot Give Birth to Crocodiles, But Humanity Can Soar Beyond the Horizon; Revolution and Communism: A Foundation and Strategic Orientation; Constitution of the Revolutionary Communist Party, USA; and Communism: The Beginning of a New Stage: A Manifesto from the Revolutionary Communist Party, USA. 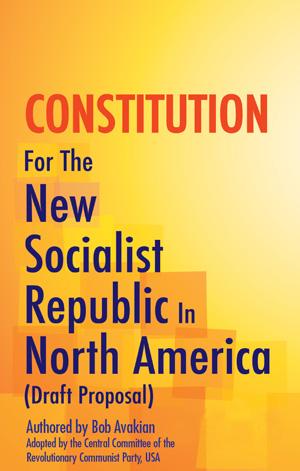 This Constitution (Draft Proposal) is written with the future in mind. It is intended to set forth a basic model, and fundamental principles and guidelines, for the nature and functioning of a vastly different society and government than now exists.