Tim Tebow, quarterback for the Denver Broncos in the National Football League, is being widely, and seemingly endlessly, promoted—as an icon not only in the realm of sports but much more broadly. I have followed sports, including football, for many decades now, and I cannot recall ever witnessing anything like this. In a highly orchestrated and concentrated campaign, Tebow is being held up as a “worker of miracles” on the football field but, more than that, as a “role model” and moral standard-bearer.

This hype around Tebow is completely and strikingly out of proportion to any demonstrated ability or actual accomplishments on Tebow’s part, in terms of performance as a professional football quarterback. If you have been paying attention not only to the arena of sports but to things more broadly in this society and the world, you should be able to quickly guess why this is: Tim Tebow is a religious fanatic—of the Christian fundamentalist variety—who aggressively promotes his medieval views and values in a way that is obviously considered useful by significant sections of the powers-that-be in the U.S. Among other things, during the Super Bowl (the American professional football championship) a couple of years ago, Tebow was the centerpiece of an ad whose purpose was to oppose the right of women to reproductive freedom, in particular abortion. The ad was sponsored by a right-wing Christian organization which aggressively opposes the right of women to abortion (it is also a fact, and highly revealing, that as a general rule the reactionary Christian fundamentalist forces that oppose a woman’s right to abortion also want to ban birth control).

This promotion of what is in reality a fascist outlook and program, in the form of fundamentalist Christianity, is aided by the notion—aggressively championed by some, and far too often unchallenged by others—that there is a direct connection between how religious someone is and how “moral” he or she is. Which avoids the critical question: What is the content of this morality? More specifically: What, in fact, is being promoted through the propagation of religious fundamentalism, including the kind of “Biblical literalism”—insisting that the Bible is the word of God which must be accepted as absolutely true, and as the standard for behavior, in every respect—with which Tim Tebow is associated? In reality, it is irrational, anti-rational ignorance and superstition—which denies well-established scientific fact, such as evolution, and is opposed to the scientific method and approach in general—as well as the insistence upon all kinds of reactionary, extremely oppressive and literally murderous values, social relations, and actions. And this is not something that should somehow be overlooked, excused, or minimized because Tebow works hard at being a quarterback (has a “good work ethic”) and supports religious charities (something reactionary religious fundamentalists often do).

Since one of the main ways in which Tim Tebow in particular propagandizes and proselytizes for his religious fundamentalism is through continual and prominent citation of verses from the Bible, I am offering the following tips for Tim Tebow, in terms of passages from the Bible he should cite and call attention to, in order to bring to light what is the actual content—the fundamental worldview, relations, values and morals—which are promoted, and indeed insisted upon, in the Bible. 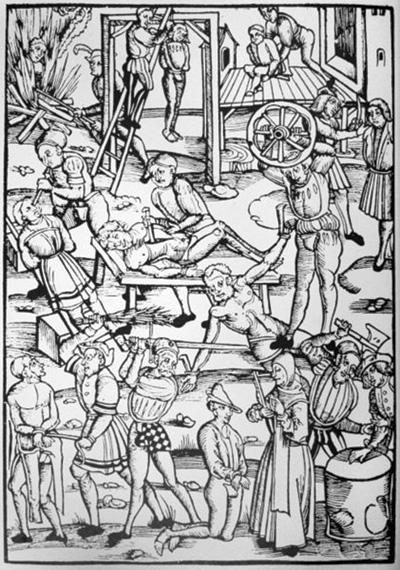 Exodus 22:18 A depiction of punishments for people accused of witchcraft from Ulrich Tengler’s Laienspiegel,1508 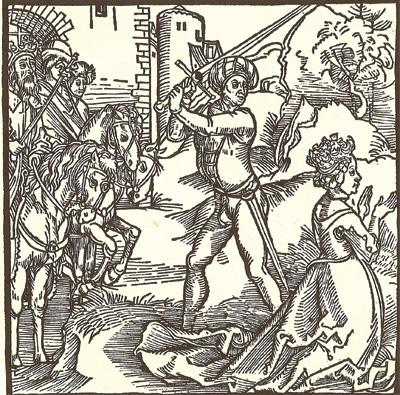 Leviticus 20:10 King Jehu causes his wife to be beheaded for infidelity, by Albrecht Dürer, 1493

The above are only some passages from the Bible—and many, many more could be cited—which clearly illustrate the truth that (as I put it in the book, Away With All Gods! Unchaining the Mind and Radically Changing the World) the Bible, taken literally, is a horror. (I would be happy to provide Tim Tebow with a copy of this book.)

If Tim Tebow wants to truly inform people about what the Bible represents, let him cite the above verses of the Bible and acknowledge what they actually advocate. If he wants to claim that he does not insist on taking the Bible as the literal and absolute word of the one true God, then let him say that openly and without equivocation—and admit that the Bible is not a divine work, but rather the work of human beings, which is full of ignorance and superstition as well as the advocacy of all kinds of truly horrendous values, relations, and actions. If he wants to say that he does not uphold what is put forward in what has been cited here, then let him disavow not only these particular Biblical passages but indeed the Bible as a whole, for the words spoken in these passages are not presented in the Bible as deviations from the righteous path, advocated by enemies of the one true God. No, these are said to be the words of the Biblical God himself, or of those identified, in the Bible itself, as the most worthy messengers, prophets, and apostles of this God—such as Moses, Isaiah, and Paul—as well as the supposed son of this God, Jesus.

Meanwhile, enough with the incessant campaign to not only portray Tim Tebow as a far greater football player than he actually is, but also to portray him as a nearly god-like icon, serving as a moral example and compass. Enough of the morality, and all that is bound up with the morality, that Tim Tebow stands for and aggressively shoves in everyone’s face.