Can This System Do Away With, or Do Without, The Oppression of Women?—A Fundamental Question, a Scientific Approach to the Answer

(from previously unpublished correspondence, 2014, now published in Break ALL the Chains! Bob Avakian on the Emancipation of Women and the Communist Revolution)

Through which mode of production will any social problem be addressed?

That is the most fundamental question that must be asked, in regard to changes in society. And the answer to that question will be decisive in determining what must be done to bring about the changes that are understood to be necessary and desirable. Why? Because the mode of production—the basic economic relations and the basic dynamics of the economic system—is the decisive factor in determining what the character of a society, and its dominant social relations, politics, and ideology, will be.

To apply this to the particular question of whether this capitalist-imperialist system can do away with, or do without, the oppression of women, it is necessary to pose, and answer, some essential questions that need to be addressed in determining this, including:

How, under this system and given its fundamental relations and dynamics, would the role of women in childbirth and the rearing of children, the character and role of the family, and the system of commodity production and exchange that characterizes capitalism—how would all this, and the many direct and indirect expressions and manifestations of this in the superstructure of politics and ideology, be radically transformed in a way that would lead to abolishing the oppression of women?

How would the putrid social relations and culture that dominate in this society—which oppress and degrade women in a thousand ways, including the most vicious and violent—be actually transformed, within the confines of this system, in a way that would contribute to doing away with all the oppression and degradation of women?

How would all this be achieved, not only within a particular country, such as the U.S.—and not just for a section of people, particularly the more well-off and privileged—but for human society as a whole, on a global scale, especially given the highly globalized nature of this system, and its fundamental relations and dynamics?

There is much that has already been brought to light which demonstrates how the oppression of women has been historically, and today remains, completely and integrally bound up with the division of society into masters and slaves, exploiters and exploited. At the same time, there is further analysis and synthesis that needs to be done—in regard to the situation of women in the world and how this relates today to the fundamental relations and dynamics of the dominant system in the world, capitalism-imperialism. But this needs to be taken up with a thoroughly and consistently scientific method and approach. And I am firmly convinced that such a scientific analysis and synthesis—including with regard to the basic questions that have been posed here—will reinforce, and further deepen, the fundamental understanding that it is impossible to achieve the emancipation of women under this system, and that this emancipation can only be fully and finally achieved through, and as a key part of, the revolutionary advance to communism throughout the world.

If someone wishes to argue that it could be possible to do away with the oppression of women under this capitalist-imperialist system, then let them make that argument, but that argument must include an answer to the kinds of essential questions I have posed here.

(From Break ALL the Chains! Bob Avakian on the Emancipation of Women and the Communist Revolution) 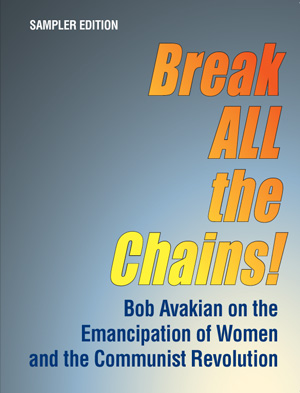