MORALITY WITHOUT RELIGION,
EMANCIPATION THAT IS REAL

I heard that when people took out my article Emancipation From Mental Slavery And All Oppression to people on the west side of Chicago, someone raised: “Where does our morality come from if we aren’t religious?”

But let’s get into it a little deeper. First of all, the fact is that the morality in the Bible is not a good morality—it is a morality that upholds slavery, the oppression and brutalization of women, and all kinds of other horrors. This is also true of the Qur’an and the scriptures of other major religions as well. (If you don’t believe it, look into my book Away With All Gods! Unchaining the Mind and Radically Changing the World—and then go look at those scriptures themselves.)

Still, this is an important question: “Where does our morality come from if we aren’t religious?” The answer is that all morality comes from people—from the society and world that people live in. All the religious scriptures have been written by people living in a particular society at a particular time, and those scriptures are a kind of mirror of those societies. That is why, to cite one important example, the scriptures, and the notion of god in the scriptures, in the main “monotheistic” (one-god) religions—Judaism, Christianity, and Islam—are patriarchal, male supremacist (with “god” spoken of in male, patriarchal terms—“God, the Father,” and so on). The relations being described and insisted upon are patriarchal, male supremacist relations, with women being kept in an inferior position, often brutally so. These scriptures were written by human beings who lived within patriarchal, male supremacist societies, and the scriptures they wrote reflect this. At any given time, the morality that dominates within a particular society is one that reflects the existing conditions and relations within that society. And this morality will be promoted especially by those who benefit from those existing conditions and relations.

We need to take up and win people to a morality that is in line with the society and world that is both possible and necessary for humanity as a whole to thrive, in an all-around way, in moving beyond all situations in which one part of the people stands above and lords it over the others—a world without exploitation, inequality and oppression—a communist world.

I will come back to this point, but first let’s look further at how morality reflects the society in which people live. To take one important example, when slavery existed in this country, and played a big part in creating the wealth of this country, those who profited from slavery promoted the idea that slavery was “moral,” was a good thing, not just for the slave-owners but for the slaves as well, who were regarded as inferior and in need of the “guiding hand” of their masters to “civilize” them—as they were being cruelly exploited and oppressed. And these slave-owners used the Bible, and the way it upholds slavery, as a justification for what they were doing. But, as things developed, in the parts of the country where slavery might still have been legalized but did not play a big part in the development of the economy, there were capitalists whose wealth and power rested on other forms of exploitation (not literally owning people but using them as wage-workers—paying people, including children, starvation wages to work long hours under terrible conditions). Over time, the interests of these capitalists, who were centered mainly in the North, came into sharper and sharper conflict with the major slave-owners, who were located in the South. And finally this conflict of interests became so sharp and deep that it led to the Civil War—and, in waging war against the slave-owning Confederacy in the South, the leaders of the Union (in the North), headed by Abraham Lincoln, found that they had to free the slaves in order to win the war, and they actively promoted the idea that slavery was wrong—immoral.

This gets to another important point: Morality reflects the reality—the society and world—that people live in, but that reality is full of contradiction. To give another example from the history of this country, at its very beginning, in striving for independence from England, the founders of the country proclaimed (in the words of the Declaration of Independence) that “all men are created equal.” But here was another sharp contradiction: These words were written by Thomas Jefferson, himself a slave-owner who actively promoted the interests of the slave-owners and the extension of slavery throughout the expanding territory of the United States. Yet this contradiction—between the declaration that all men are created equal and the reality of slavery—was recognized and seized on by those who opposed slavery to argue and fight for the abolition of slavery. And, so too, in the fight for the rights of women: If it was being declared that all men are created equal, which was a claim to some kind of “universal” principle, good for all times and all situations, then why shouldn’t this also apply to women?

Today, humanity is living within the confines of the system of capitalism-imperialism. This is a system of exploitation, but it is not a system of outright slavery (although there are still actual and terrible forms of slavery in the world, including the sex trafficking and enslavement of millions of women and girls). So today, the morality that is promoted through all the major institutions of society, including the educational system, is one which justifies this system of exploitation and oppression, declaring (as the slave-owners did with their system in their time) that this system of capitalism-imperialism is good, is the best system, not only for the super-rich who profit from it, but for everyone, including all those who are exploited and maintained in conditions of deprivation and degradation.

But this system, too, is full of sharp and deep contradictions. Its declaration that it provides “equal opportunity for all” is shown to be a lie by the tremendous inequality that exists everywhere—inequality of status, but also of opportunity, not only in access to wealth but healthcare, education, housing, and every other part of society. So, too, the claim that there is “justice for all,” with “the rule of law” applied equally to all, is shown every day to be a farce, as Black people and other people of color are not only discriminated against through the “justice system” but are repeatedly brutalized and murdered by the police (the enforcers of “law and order”) and there is nothing further from the truth than the claim that a rich person and a poor person can each get “an equal shake” in this “justice system” (or equal treatment anywhere else in society). On an international level, the rulers of a capitalist country, such as this one, claim that they are working to develop relations of “peace and prosperity” in the world as a whole—but this claim is in profound contradiction to the reality that this system relies on maintaining much of the world in desperate conditions, so that there are masses of people who can be super-exploited for the benefit of the capitalist imperialists; and it relies on the threat and the use of force, of massive violence, to maintain countries and people in these dominated and desperate conditions. (Plus, there is the rivalry between the different capitalist countries, including the USA, China, Russia, and others, for the top-dog position in this dog-eat-dog world of capitalist-imperialist domination.)

The answer to all this is NOT to “make this system live up to its promises of justice and equality.” Many have tried this, and all have failed—because this inequality and injustice is built into this system, and the very nature and functioning of the economy in a capitalist-imperialist system continually creates and requires massive poverty, inequality and oppression—and war to enforce all this—throughout the world.

The answer is to overthrow this system as the first great step to eliminating all the unnecessary suffering that this system imposes on the masses of humanity. The basis exists, in the technology and the knowledge of people, all over the world, to put an end to the outrageous situation that now exists where, amidst fantastic wealth and overall abundance, there is widespread poverty in the world, with millions of children dying each year from starvation and preventable disease, and the masses of humanity maintained in conditions of poverty, ignorance and misery, backed up by unspeakable violence and the resulting destruction.

It is in the contradiction between what is now possible, in terms of the emancipation and the uplifting of the masses of humanity, on the one hand and, on the other hand, the terrible conditions which this system imposes on those masses, as well as the very real threat it poses to the future of humanity—it is in this contradiction that the basis exists for a revolution to overthrow and move beyond this system, and all systems and relations that treat human beings as less than human, as merely a means to make wealth for and to serve others. And the morality we need is the morality that recognizes this profound contradiction and encourages and inspires the struggle to abolish and move beyond it through the communist revolution.

This is a morality based not on notions of some supposedly all-powerful but really non-existent gods (or other imaginary supernatural beings and forces) but on a scientific method and approach to reality and a scientifically-grounded understanding of the need, and the possibility, for this most radical and emancipating revolution. 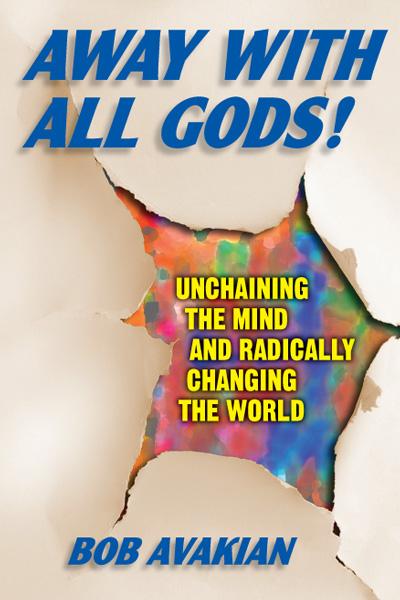 Learn more and order the book.