A statement from
Bob Avakian

To all those who have risen up so powerfully and are demonstrating to say “No More!” after the murder of George Floyd, and all the other cold-blooded murders by police.

To all those who have drawn inspiration from this righteous uprising.

To all those who have had the blinders forced from their eyes and have been provoked to think anew about what kind of country it is that we live in.

This has raised the biggest questions about what is needed for people everywhere to live fully as human beings:

AN END TO INSTITUTIONALIZED RACISM
AND MURDER BY POLICE—NOTHING LESS!

AN END TO ANY WAY PEOPLE ANYWHERE ARE
USED, ABUSED, AND BRUTALIZED—NOTHING LESS!

We need a world without white supremacy and male supremacy—a world where no one is regarded as “alien”—a world without war, where people from all over the globe, with a beautiful flowering of diversity, act together for the common good and are truly caretakers of the earth.

THIS IS NOT JUST A DREAM.

The possibility for this is being powerfully demonstrated in this uprising of the people, of all different races and genders, from all parts of the world—refusing to remain silent or stay passive while all this oppression and brutality goes on.

To Make All This Real
We Need: REVOLUTION—NOTHING LESS!

A strategic plan for how to make this revolution, and a sweeping vision and concrete blueprint for a radically different and much better world, where all this can become possible—can be found in the work I have done, including the Constitution for the New Socialist Republic in North America.

You can learn more about this revolution and become part of making it a reality by going to revcom.us and joining with the revcoms.

We do not need to live in this world where so much of humanity suffers so unnecessarily under this system of capitalism-imperialism that cannot exist without exploiting and degrading people, suffocating their humanity and killing them without mercy.  We can do much better!  Don’t listen to talk about how “it can never happen.”

Look around you—what seemed impossible yesterday is happening right now!  Revolution, why should we settle for anything less?

A statement from Bob Avakian: NOTHING LESS! 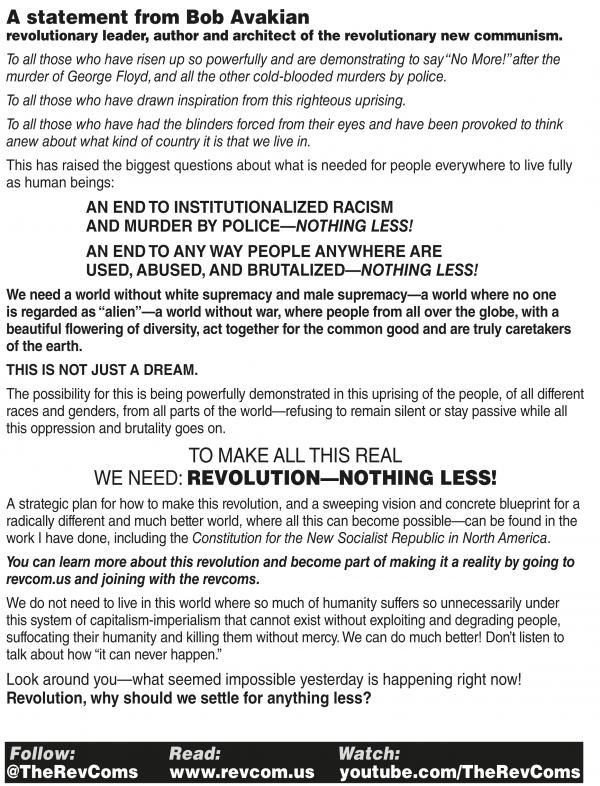