PATRIARCHY AND MALE SUPREMACY,
OR REVOLUTION AND ENDING ALL OPPRESSION?

As I have emphasized (and it is important to keep emphasizing):

There is a direct line from the Confederacy to the fascists of today, and a direct connection between their white supremacy, their open disgust and hatred for LGBT people as well as women, their willful rejection of science and the scientific method, their raw “America First” jingoism and trumpeting of “the superiority of Western civilization” and their bellicose wielding of military power, including their expressed willingness and blatant threats to use nuclear weapons, to destroy countries.1

Kristin Kobes Du Mez has extensively studied the phenomenon of Christian fundamentalism, which is the driving force of this fascism. Referring to this as “evangelicalism” (or, more specifically, “white evangelicalism”) she speaks to the same kind of “direct connection” between many of these forms of oppression, and she makes this important point:

a nostalgic commitment to rugged, aggressive, militant white masculinity serves as the thread binding them together into a coherent whole. A father’s rule in the home is inextricably linked to heroic leadership on the national stage, and the fate of the nation hinges on both.2

There are some—like Louis Farrakhan, leader of the Nation of Islam, and others—who insist that they are foremost opponents of white supremacy, while at the same time they have a great deal in common with the Christian fascists, including the promotion of all kinds of ridiculous and outrageous mythology and conspiracy theories, in opposition to science and the scientific method, and the insistence on many of the same oppressive relations that the fascists are determined to enforce.

To speak to one crucial dimension of this: There is no way to end white supremacy while clinging to, and insisting upon, male supremacy. Seeking to counter “militant white masculinity” with a Black version of the same “militant masculinity”—another variation of patriarchal male supremacy—this cannot lead to ending any form of oppression.

Just as there is a “direct connection” between all the oppressive and repressive relations and ways of thinking that bind together the program of the Christian fascists, there is no way to break any link in this chain without breaking them all.

And, going deeper, the whole chain of oppression and monstrous crimes against humanity—white supremacy, male supremacy, discrimination and brutality against LGBT people, American supremacist domination and wars for empire, xenophobic hatred of immigrants, plunder of the environment—all this is fundamentally rooted in this system of capitalism-imperialism.

Seeking to “get in on” (to “get your fair share of”) the spoils that come from American capitalist-imperialist plunder of the earth and exploitation of masses of people on every part of the earth—or seeking some “bargain” with the rulers of this system, in order to set yourself up as new overlords and exploiters of masses of people—this is not a road to emancipation, but something that contributes to perpetuating oppression.

Only through the revolution aiming to overthrow this system—to defeat and dismantle this system of capitalism-imperialism and all its institutions of oppression and violent repression, replacing them with institutions that can serve the cause of emancipating all of humanity and enabling human beings to become fit caretakers of the earth—only in this way can each and every form of oppression, plunder and exploitation be finally ended.

1. The Trump/Pence Regime Must Go! In The Name of Humanity We REFUSE To Accept a Fascist America, A Better World IS Possible. Video of this speech by Bob Avakian is available at revcom.us.  [back]

2. Kristin Kobes Du Mez, Jesus and John Wayne: How White Evangelicals Corrupted a Faith and Fractured a Nation, Liveright Publishing. This statement is from the “Introduction.” Emphasis has been added here.  [back] 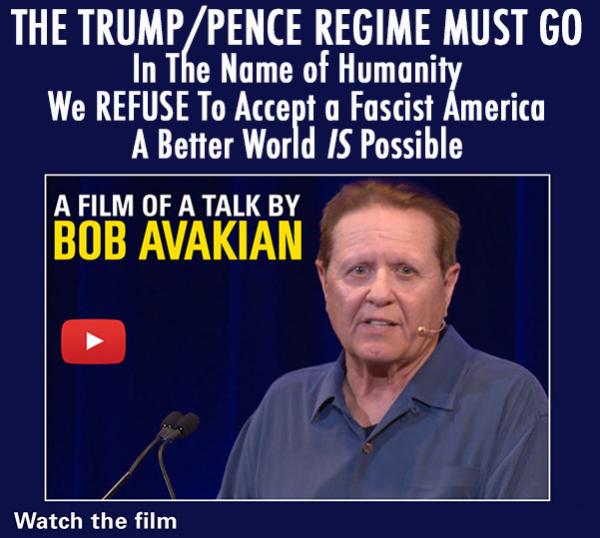 See the full film, excerpts and Q&A of this film