BIDEN, A DOORKNOB—
AND GOING THROUGH THE DOOR

This is a way of emphasizing the important point I made in my August 1 Statement:

To approach this election from the standpoint of which candidate is “better” means failing to understand the truly profound stakes and potential consequences of what is involved. The fact is that there can be one—and only one—“good” that can come out of this election: delivering a decisive defeat to Trump and the whole fascist regime. Doing this would create far better conditions for continuing to wage the struggle against everything represented by the Trump/Pence regime and all the oppression and injustices of this system, and would be a great gift to the people of the world.1

As a fundamental point of orientation, we need to quit looking to any of these politicians to end injustice, oppression, and the destruction of the environment. Oppression and exploitation, and the destruction of the environment—all this is built into this system of capitalism-imperialism that all these politicians represent. Let me say it again: In regard to this election, the only “positive” that can come out of this is preventing the further consolidation of the white supremacist, male supremacist, immigrant-hating, LGBT-hating, science-defying, climate-wrecking, nuclear annihilation-threatening, future-destroying fascist Trump/Pence regime.

And that is a very important positive—it is, really, a matter of life and death.

At the same time, I have repeatedly emphasized that, given the fact that Trump is already stealing the election, through an ongoing rolling coup, simply relying on voting is very likely to lead to disaster. And this is why, while a massive vote for Biden is important, it is crucial that growing numbers of people—in the thousands now, and building to become millions—take to the streets around the country, and stay in the streets, day after day, taking up the call from RefuseFascism.org that the Trump/Pence regime must be OUT NOW!2

And, having prevented the catastrophe that would result from this regime remaining in power, we can carry forward the struggle to build for something very positive—revolution—to put an end to this system and bring a much better system into being.

1. Statement by Bob Avakian, August 1, 2020, On The Immediate Critical Situation, The Urgent Need To Drive Out The Fascist Trump/Pence Regime, Voting In This Election, And The Fundamental Need For Revolution (emphasis in the original). This Statement is available at revcom.us.  [back]

2. In addition to his August 1 Statement, this point (on Trump’s ongoing moves to steal the election, and the need for mass mobilization demanding Trump/Pence OUT NOW!) is emphasized in a number of other works by Bob Avakian, including the important three-part series titled Voting Will Not Be Enough—We Need To Take To The Streets, And Stay In The Streets Demanding Trump/Pence Out Now! (Part 1, Part 2, Part 3) which is also available at revcom.us.  [back]

Read all the articles in Bob Avakian’s new series 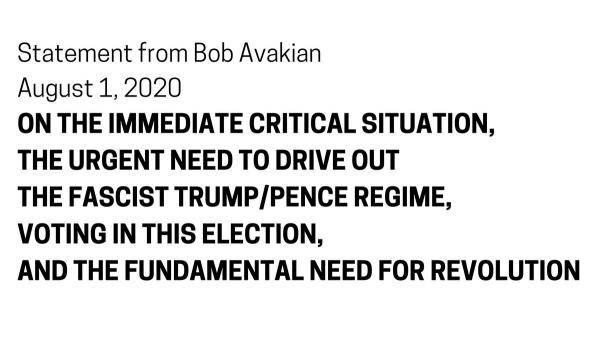 Part 1:
THE DEMOCRATS CAN’T FIGHT TRUMP
THE WAY HE NEEDS TO BE FOUGHT

Part 2:
Trump Is Already Stealing the Election.
WE NEED TO VOTE, BUT TRUMP WILL NOT BE STOPPED JUST BY VOTING!