“It’s Not Our Embassy!” — Excerpts from  From Ike to Mao and Beyond

Editors’ note: We are sharing excerpts from Bob Avakian’s (BA) memoir, From Ike to Mao and Beyond, regarding the stand taken in support of the Iranian Revolution while BA and the Mao Defendants were themselves up on serious charges as a result of arrests at a powerful demonstration in January 1979 against Deng Xiaoping, who was being hosted triumphally at the White House by then-President Jimmy Carter.1 Throughout 1978 the Iranian Revolution against the regime of the Shah, which had been backed by U.S. Imperialism for several decades, was gaining ground. By the fall of 1978 that revolution was causing major problems for the U.S. and its puppet Shah. In 1979, over a hundred volunteers had gathered in Washington D.C. to “Turn D.C. Upside Down” in defense of BA and the Mao Defendants, and a major rally of support was held at the Howard Theater on November 19, which BA spoke at. These excerpts give a sense of how BA gave leadership in this situation to carry out a fully internationalist orientation and position. For more about this whole situation, read fuller discussion in the memoir, and actually read the whole memoir.

1. After the death of the revolutionary leader Mao Zedong in 1976, Deng Xiaoping led a coup that overthrew socialism in China and restored capitalism. When Deng was invited to visit the U.S., Bob Avakian (BA) and the Revolutionary Communist Party led a demonstration in Washington, DC, against the visit to expose what had happened in China and what Deng represented. The protest, which became an international incident, was viciously attacked by the police. Scores of protesters were brutally beaten and many were arrested, including BA. BA and about a dozen others, who faced what amounted to over 200 years in jail, were known as the Mao Defendants. For much more on this, see Bob Avakian’s memoir, Chapters 21 (“‘A Fitting Welcome” for Deng Xiaoping”) and Chapter 23 (“Stop the Railroad!”).

… This was the period when the Iranian revolution had reached its high point, and driven the Shah of Iran out of the country. I remember a headline in the Chicago Tribune when the Shah was teetering on his throne, just before he fell. This headline declared: “He May Be a Despot, But He’s Our Despot.” That was basically the stand of the Carter administration and the U.S. ruling class, right until the fall of the Shah. The U.S. had put him in power through a CIA coup in 1953, and they maintained him in power for almost three decades. And they were still doing what they could to protect him at the end. Then, after the Shah could no longer maintain his rule in Iran, they brought him into the U.S., after having tried to get a few other countries to take him.

People in Iran suspected the Shah was being given refuge here to prepare a counter-revolution, and a group of Iranian students and youth then seized the U.S. embassy in Teheran. The Iranians occupying the embassy got hold of the records there and proved that many of the embassy employees were spies and CIA agents who were working to undermine and reverse the course of the Iranian revolution and to bring Iran more fully back under the domination of the U.S.

With these students and others occupying the U.S. embassy, Ted Koppel pronounced “America Held Hostage,” and the occupation of the embassy became a big controversial issue in the U.S. There was a big uproar, and the ruling class in the U.S. worked to whip up all kinds of chauvinism toward the Iranian people, including Iranians living in the U.S., and to inflame reactionary sentiments among the American people about the Iranian revolution. This was happening at the same time as our case was getting ready to go to court and as we were working, through the efforts of the volunteers and in an all-around way, to build support for myself and the other Mao Tsetung Defendants and to promote and project the line and objectives of our Party broadly throughout society….

At the same time, we had to take a stand in support of the Iranian revolution. This was something I felt very strongly about, and I spoke about this to the volunteers in D.C. The leadership of our Party was firmly united that it was very important to work to win people away from the whole chauvinist hysteria and mob mentality that was being whipped up. Iranian students in the U.S. were being attacked. When we would go out to do revolutionary work in general, and particularly to talk with people and do agitation about what was happening in Iran, larger numbers of people would gather. Things would get extremely heated, and sometimes there would be physical attacks on our people. But we were very determined that we had to take this on and turn it around, even as we had this major campaign and battle that we had to wage around the case flowing out of the demonstration against Deng Xiaoping.

One of the things that struck me, in reading a number of reports and talking to comrades who were involved in this work, is that while there was this hysteria, mob mentality and chauvinism whipped up against the Iranian people and the Iranians who lived in the U.S., and it was very widespread — the government and the media had put a lot of effort into this—it was also very superficial. When we talked with people about the history of what the U.S. had done in Iran, the torture and oppression to which it had subjected the Iranian people for decades through putting the Shah of Iran in power and keeping him in power since 1953; when we showed why the Iranian people were so angry at the U.S., and how they were determined to fight against the domination of the U.S. in their country—we could puncture this hysteria and quickly things would begin to change. As is so often the case with people who are whipped up around reactionary shit by the ruling class, there wasn’t any depth to it. People were largely acting out of ignorance and not understanding what was motivating the Iranian people, and what had been going on for decades in Iran — all of which had been hidden from people in the U.S….

We had worked closely with the many radical and revolutionary-minded students from Iran who were living and studying in various parts of the U.S. Ironically, they had been sent to the U.S. by the Shah. The Shah had this program to modernize enclaves of the Iranian economy, while the masses of people would be enmeshed and enslaved in deep poverty and oppression. So his government, working with the U.S. government, had financed a lot of these students to go to the U.S. to get training in things like engineering. But, especially because of the nature of the times, many of them had become radicalized —and by and large this was a secular anti-imperialist radicalism, rather than fundamentalist religious militancy. Many of them had become revolutionaries of one kind or another, and the communist and Maoist trend had a lot of initiative among these thousands of Iranian students. We continued to work closely with them and support them as the Iranian revolution developed, although some of them were beginning to go back to Iran to take part directly in the revolutionary upsurge there.

So when I gave this speech at the Howard Theater I talked about this and why it was important that we take a stand in support of the revolution in Iran and the Iranian students here who were coming under attack— it was, once again, a question of internationalism. It was our responsibility to oppose our own ruling class in trying to reinstitute and fasten down more tightly the domination and oppression of the Iranian people. And, as I put it in that speech: “It’s not our embassy, we don’t have an embassy, this is the embassy of the imperialist ruling class and we stand with the Iranian people.”36

This was controversial even among people close to us and among our broader supporters. Some people felt that by taking this stand, in the midst of this whole attack on us, we would be taking on an even bigger burden and bringing down even further repression on ourselves. We recognized this danger but our position was, as I put it in that speech: “If we don’t stand with the Iranian people, then we’re not worth defending. If we don’t uphold our internationalism and our communist principles, then we’re not worth defending.”

36. The RCP came out with a transcript of that part of the speech almost immediately after the rally, entitled “It’s Not Our Embassy.” Party members and supporters took this pamphlet out very broadly, generating controversy and through sharp struggle helping to repolarize the terms of debate in a more favorable way. [back] 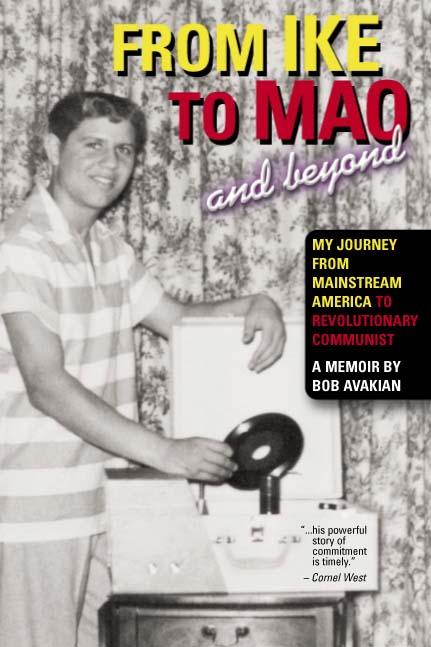 Read
excerpts from
the memoir

Order
the book from
Insight-Press.com