For Revolution to Break Through, for Humanity to Be Emancipated, Communist Leadership Is Necessary, and Indispensable

The following is an excerpt from WHAT HUMANITY NEEDS... Revolution, and the New Synthesis of Communism, An Interview with Bob Avakian. 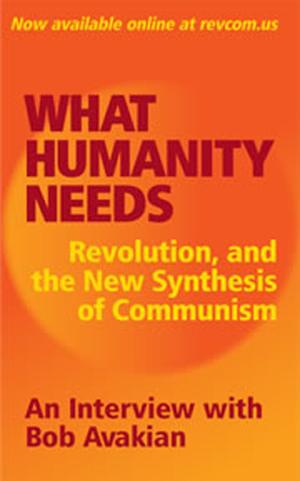 Getting to the Root of the Problem, and the Role of Leadership

BA: So that's where the role of leadership does come in. There can be—there has been, and there will be—lots of mass upheaval, lots of people resisting oppression, lots of people rising up spontaneously, and with varying kinds of ideas, to fight back, various ideas about what the problem is and therefore what the solution is. But to really get to the root of the problem, and be able to transform things in a fundamental way, requires a scientific understanding of what is, in reality, the problem, and what is, in fact, the solution. These things are not immediately apparent.

An analogy has been made many times—and perhaps it's been overused, but it's still, I think, a very relevant analogy—to a sickness. People who are sick know what at least many of their symptoms are. They know how they feel. They know that they don't feel well. And, if you wanna get rid of that sickness, understanding what the symptoms are is an important part of it. But that won't do it, in and of itself. You need to go to somebody who has the science of medicine, in that case—who can analyze deeply what the problem is and therefore what the solution is. And, of course, a person with that medical knowledge, that medical science, has to have a good method to learn from the patient. They have to ask the right questions and listen carefully, draw the patient out to really understand the symptoms, how the patient is feeling, how that's different than how they normally feel, when these symptoms appeared, what other things might have been going on that were related to the symptoms, and how do you sort out what might be related to the symptoms and what's coincidental. All that is part of being able to apply a scientific approach. But you need to then make another leap beyond just understanding what are the symptoms to get to the real cause.

And, again, that's where leadership comes in—with the question of transforming society, making revolution, uprooting oppression and exploitation, ridding human society of antagonistic conflicts, enabling human beings to have an entirely different relationship with the rest of nature, with the environment, to be fit caretakers of the earth. That requires the science of communism—as it's been developed from the time of Marx to now, and is continually being developed—in order to get a scientific understanding, to dig beneath the surface and get to the root of things, and come up with a real, a correct—or essentially correct—analysis of the problem and the solution: what's the cause and what needs to be done to uproot the cause of all these different things, in the case of ridding society of exploitation and oppression, wars, devastation of the environment, and so on....

For Revolution to Break Through, for Humanity to Be Emancipated, Communist Leadership Is Necessary, and Indispensable

BA: Yes, because, look, it goes back also to the thing we were talking about, that I brought up in relation to the "Occupy" movement, or things in the past, where people say: "You can't kill an idea whose time has come" or "You can kill a revolutionary but you can't kill the revolution." Well, those ideas are wrong. They may be comforting in the short term, but they're wrong. Because, actually, ideas can be suppressed, at least for long periods of time. And movements based on ideas can be suppressed. And individual leaders—which are, at this stage of history, extremely important in order to realize ideas in the real world, in order for ideas to become a living reality and be fought for and achieved by masses of people—leaders, including individual leaders, or especially those who do concentrate and have brought forward an advanced understanding and method, do count for a tremendous amount. And, if revolutionaries—especially revolutionaries who play that kind of role and represent that kind of high level leadership—if those leaders are killed or suppressed, it has a tremendously destructive and demoralizing effect in setting back the revolutionary movement in very profound ways.

Now, we wanna get to the point where things don't depend so much on a few individual leaders. Yes, definitely. But it requires a whole historical epoch to get to that, because in order for that to happen you have to get beyond the stage where we're at—where there are profound contradictions in society and the world that enslave the masses of people in their great majority, in one form or another, and that prevent them from being able to play the kind of role they could play when, in a whole different kind of world, they have broken off and cast aside the fetters that do chain them down.

We need to get to that whole different kind of world. But we can't get to it by wishing we were there, or pretending we are there, or pretending that people who have an advanced role to play, an advanced understanding and an advanced method in terms of leading people to take that up and fight for it, and to themselves become people who can contribute to further developing it—if we pretend that individuals who play that role are not as important as they are, or if we attack them for daring to play that role, then, yes, we are helping to kill off the revolution for at least a significant period of time. And that does matter profoundly. So, yes, we should defend them, and we should form—as you know, as one of the resolutions of our Party on the questions of leadership and individual leaders, which was passed by our Central Committee more than 15 years ago,20 says: we should form a solid wall around the leaders of our Party and, in particular, around Bob Avakian as the individual who is the "leader of leaders" of our Party. Yes, we need to do that, and broad masses of people—growing waves of people—need to become part of building that wall in opposition to the repression of the ruling class.

But, in addition to that, and at the same time as that is being done, people need to take up what has been brought forward by the leadership of the Party collectively and, in a concentrated way, through my leadership and body of work, and fight for it out in the world, and bring forward people around it—win them to it, and mobilize them to fight for it and to win others to it, to build up the basis to where, once again, thousands are won to this and organized around it. And when the full revolutionary crisis ripens, and millions and tens of millions are demanding a radical way forward and a radical way out of this, those thousands can be the core of leadership to bring those millions and tens of millions into the revolutionary movement and have a real fighting chance of winning.

That's the importance of all this. It has to do with whether the masses are gonna be chained in these conditions of unspeakable misery, and unnecessary misery, or whether there's actually gonna be a fighting chance to break out of this and get humanity to a whole different place. That's what this is all about, and that's what the role of individuals should be about: contributing whatever they can to that—not just as individuals, but as part of a collective process, as part of a broader revolutionary movement and, as they get to the point of being fully won to this, making the leap to becoming part of the Party that has to be at the core and play the leading role collectively in this whole revolutionary process.

20. This refers to the 1995 Leadership Resolutions on Leaders and Leadership. This consists of: Part I, "The Party Exists for No Other Reason than to Serve the Masses, to Make Revolution"; and Part II (which is the part more specifically referred to by Bob Avakian here), "Some Points on the Question of Revolutionary Leadership and Individual Leaders." This two-part resolution was passed by the Central Committee of the RCP, and was published on October 1, 1995, on the occasion of the 20th anniversary of the founding of the RCP, in issue #825 of the Revolutionary Worker (now Revolution). This is also available at revcom.us. [back]