Excerpt from AWAY WITH ALL GODS! Unchaining the Mind and Radically Changing the World by Bob Avakian

Religion, Fundamentalism, and the Slave Mentality

Editors' Note: The following is an excerpt from the book AWAY WITH ALL GODS! Unchaining the Mind and Radically Changing the World, by Bob Avakian (available from Insight Press). The book was published in 2008.

At the same time, there is in religion, but more especially in literalist religious fundamentalism, the promotion of a mentality that sees people themselves as inherently sinful, that accepts the notion that the reason people who are suffering are in the situation they’re in, is because they have come into disfavor with God, because they (or others close to them) have committed acts which have brought down the wrath of God on them; and if anything good happens to them, it is because, despite all this, God in his infinite greatness and mercy has shown compassion for them. Let’s call this what it is—it is a slave mentality, with which people are being indoctrinated. All this “thank you Jesus!” is a slave mentality. It goes right along with “God works in mysterious ways,” with all the horrors that involves.

Now, I know some people are highly offended when you say things like this. But, to paraphrase Malcolm X, I didn’t come here to tell you what you want to hear, I came here to tell you the truth, whether you like it or not. Once again, it is a form of contempt for the masses of people to think that they can’t be challenged with the truth and can’t come to embrace the truth and wield it to ­emancipate themselves and to emancipate all humanity. When you say that people are being indoctrinated with, and are even taking up, a slavish mentality, you are not saying it is their fault, or that this is something they can’t change. You are calling on them and challenging them to get rid of this, to cast it off—to rise to what they are actually capable of—and you are bringing to them an understanding of why they are really in the situation they are in today and what is the way out of this. But you can’t do that without challenging this mentality. And you can’t do it while being apologetic about challenging this mentality.

Now some people say, with regard to Black people in particular, “religion is an essential part of the Black experience.” To this I say: What about slavery? Or segregation and Jim Crow? Sharecropping and the KKK? Or continuing discrimination today, along with massive imprisonment and brutality and murder at the hands of the police? Isn’t all that “an essential part of the Black experience” too? The question is, if something is an essential or integral part of experience, what role has it played, and what effect does it have? Is it good or bad? Positive or negative? Where did this religion, where did the worship of Jesus in particular, come from?

I’ve talked about the contradictory character and effect of this historically. But in today’s world—and where we stand in relation to the possibility of the emancipation of humanity from thousands of years of oppressive relations and tradition’s chains—religion, and all the more so in its literalist fundamentalist form, is a direct obstacle, a shackle, a chain holding back the masses of people from being able to emancipate themselves and to leap beyond the situation where they feel drawn towards some kind of religion as consolation for oppression­ and suffering.

So, while it is right and necessary to build unity with many people who hold religious viewpoints, it is also crucial to be very clear on what can actually enable people to engage, to understand, and to transform reality in order to finally bring an end to all the truly horrific conditions to which masses of people are subjected—and, together with that, bring an end to the need to seek consolation for the suffering that accompanies these conditions.

To win real and complete emancipation means taking up a scientific, not a religious, approach to understanding and changing reality—changing it through revolution. And especially fundamentalist religion that insists on taking the Bible, or any other scripture, literally and as the absolute and inerrant truth—and which refuses to believe anything that contradicts a literal reading of the Bible or other religious scriptures—that kind of religious viewpoint and conviction is extremely harmful. It can only keep those caught up in it completely in the dark about what is really going on in the world and afraid of trying to change the world in the only way it can really be changed—through resistance and ultimately the revolutionary overthrow of this system that is oppressing millions and literally billions of people here and throughout the world. Fundamentalist religious fanaticism can only help to reinforce the oppression and enslavement of masses of people.

In this spirit and this light, it is crucial to grasp and to put forward, boldly and straight-up: Oppressed people who are unable or unwilling to confront reality as it actually is, are condemned to remain enslaved and oppressed. 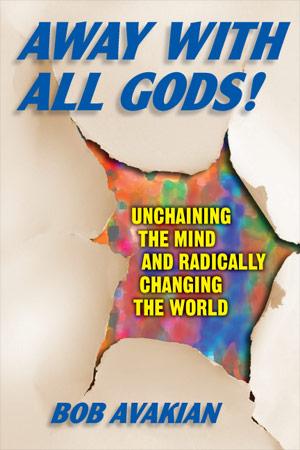 Away With All Gods! Unchaining the Mind and Radically Changing the World by Bob Avakian