Excerpts from the works of Bob Avakian—on the Oppression, and the Emancipation, of Women

From ON "PRINCIPLED COMPROMISES," AND OTHER CRIMES AGAINST HUMANITY 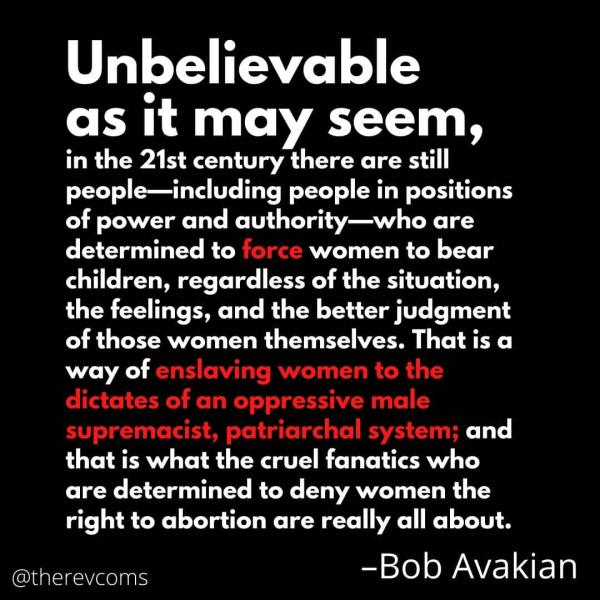 From SOMETHING TERRIBLE, OR SOMETHING TRULY EMANCIPATING: Profound Crisis, Deepening Divisions, The Looming Possibility Of Civil War—And The Revolution That Is Urgently Needed, A Necessary Foundation, A Basic Roadmap For This Revolution

Here is another profound truth: Even with all the ways that the heavy chains of hundreds, and thousands, of years of oppressive tradition weigh down on the masses of people—and place a heavy burden particularly on the half of humanity that is female—there is a deep yearning to be free of all this, which not only leads to imaginary hopes of supernatural salvation but also erupts in unrestrained fury right in this real world. And that fury needs to be fully called forth, given a scientific, revolutionary expression—focused toward the emancipation of all the oppressed and exploited of the world, and ultimately all humanity—directed to fighting against the fundamental source of all the suffering: this system of capitalism-imperialism, with its suffocating and brutal, patriarchal male supremacy, along with all its other outrages. This takes on even more powerful meaning and urgent importance in the current situation in this country (and others), where the forceful assertion of raw misogyny (hatred of women) and patriarchal subjugation of women is becoming more blatant and unbridled, focused to a significant degree now in the escalating moves to even further deny women control over their own lives and their very bodies, with the right to abortion, and even birth control, being brought under mounting attack. Right now, this slogan and call needs to be taken up broadly and made a powerful material force: Break the Chains, Unleash the Fury of Women as a Mighty Force for Revolution!

Eradicating the Oppression of Women.

The oppression of women emerged thousands of years ago in human history together with the splitting of society into exploiting and exploited classes, and this oppression is one of the cornerstones of all societies based on exploitation. For the same reason, the struggle to finally and fully uproot the oppression of women is of profound importance and will be a decisive driving force in carrying forward the revolution toward the final goal of communism, and the eradication of all exploitation and oppression, throughout the world. Based on this understanding, the New Socialist Republic in North America gives the highest priority not only to establishing and giving practical effect to full legal equality for women—and to basic rights and liberties that are essential for the emancipation of women, such as reproductive freedom, including the right to abortion as well as birth control—but also to the increasing, and increasingly unfettered, involvement of women, equally with men, in every sphere of society, and to propagating and popularizing the need for and importance of uprooting and overcoming all remaining expressions and manifestations of patriarchy and male supremacy, in the economic and social relations and in the realms of politics, ideology and culture, and to promote the objective of fully emancipating women and the pivotal role of the struggle for this emancipation in the overall transformation of this society and the world as a whole. This orientation, and policies and laws flowing from it, shall be applied, promoted, encouraged and supported with the full political, legal and moral force, authority and influence of the government, at all levels, in the New Socialist Republic in North America.