WEAPONS OF OPPRESSION,
AND THE HEART TO FIGHT
TO END OPPRESSION

This system has two big weapons it uses to maintain masses of people in a situation where they are oppressed, brutalized, degraded, and demoralized.

The first weapon is the murderous armed force of this system—which, along with all its other atrocities, continually hunts down and kills Black, Brown, and Native American people in the most depraved ways.

The second weapon is the way this system messes people up and gets them thinking and acting in messed up ways—and especially how this system denies the youth a decent future, forcibly confines so many in miserable conditions and gets them caught up in fighting and killing each other. This, too, is a monstrous crime of this system.

What kind of system condemns so many youth to nothing better than this?! What kind of system does so many people this way, and then seizes on what it has got people caught up in—uses this as an excuse to treat masses of people as less than human, murder them in the thousands and lock them up in the millions, right in this country, while it slaughters people all around the world and destroys the earth? It is this monstrous system of capitalism-imperialism that we are now forced to live under—a system that could not survive without viciously exploiting billions of people worldwide, including more than 150 million children—a system that never will, and never can, stop doing all this.

But it doesn’t have to be this way! 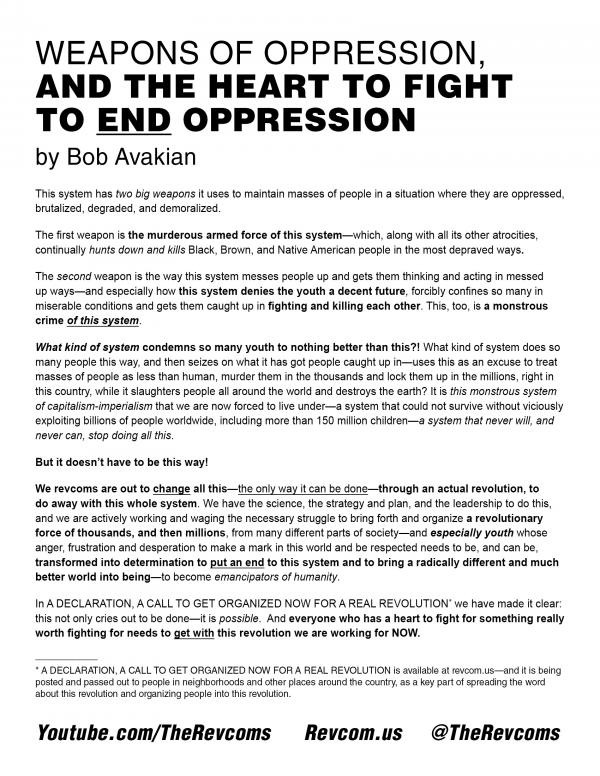 We revcoms are out to change all this—the only way it can be done—through an actual revolution, to do away with this whole system. We have the science, the strategy and plan, and the leadership to do this, and we are actively working and waging the necessary struggle to bring forth and organize a revolutionary force of thousands, and then millions, from many different parts of society—and especially youth whose anger, frustration and desperation to make a mark in this world and be respected needs to be, and can be, transformed into determination to put an end to this system and to bring a radically different and much better world into being—to become emancipators of humanity.

In A DECLARATION, A CALL TO GET ORGANIZED NOW FOR A REAL REVOLUTION* we have made it clear: this not only cries out to be done—it is possible. And everyone who has a heart to fight for something really worth fighting for needs to get with this revolution we are working for NOW.

* A DECLARATION, A CALL TO GET ORGANIZED NOW FOR A REAL REVOLUTION is available at revcom.us—and it is being posted and passed out to people in neighborhoods and other places around the country, as a key part of spreading the word about this revolution and organizing people into this revolution.  [back]