Contribute to wrenching an emancipatory future out of the horror and hopelessness...

Contribute to the Year-End Fund Drive to Raise $30,000 for the National Tour to Get Organized for an ACTUAL Revolution

Thank you to everyone who contributed and spread the word!

To everyone who can’t stand this world the way it is … who is sick and tired of so many people being treated as less than human … everyone who agonizes about where things are headed and the fact that to be young now means being denied a decent future, or any future at all ... everyone who has ever dreamed about something much better, or even wondered whether that is possible…

From A Declaration, A Call to Get Organized Now For a Real Revolution

If this describes you, we urge you to dig as deeply as you can to contribute to and support the work of the National Revolution Tour at this crucial moment.

Michelle Xai, a leader in the LA Revolution Club, talks about why she got involved with the revolution and became a follower of BA.

Listen to Joe Veale and Luna, members of the National Revolution Tour, talk about they became followers of Bob Avakian.

How to Donate to the National Revolution Tour

Write in to getorganizedforrevolutiontour @gmail.com, let us know if you are taking up collections, or to send statements.

Thank you to all the donors so far!  Many people contributed—through spreading the word, asking others, creative fundraising projects and giving directly.  Here are just some of those statements.

This is the world we confront today: White supremacists given the legal right to murder people marching for Black lives. Mobs of crazed anti-science fascists terrorizing public health officials and school board meetings with backing, and funding, by a fascist wing of the ruling class, itself on the march. The right to abortion hanging by a thread forcing millions of women into motherhood against their will. Millions of immigrants from El Salvador to Syria... Afghanistan to Haiti... driven from countries that have become unlivable... then herded into brutal border camps or sent back to the hell from which they escaped. Fires ravaging California, Brazil, Greece... rising waters threatening millions in Bangladesh... droughts in Sudan... while the system’s rulers speed humanity off a cliff with empty promises and more greenhouse gas emissions.

It is not exaggeration to say: The future of humanity hangs in the balance.

The capitalist-imperialist system at the root of this nightmare is in crisis, with deep divisions throughout society. Those who rule are locked in a bitter fight among themselves. As A Declaration, A Call to Get Organized Now For a Real Revolution says, “...the crisis and deep divisions in society now can only be resolved through radical means, of one kind or another—either radically reactionary, murderously oppressive and destructive means or radically emancipating revolutionary means.”

Bob Avakian (BA), revolutionary leader and author of the new communism, has made the analysis that we are in a rare time in a country like this when revolution—real revolution—becomes possible. He is providing urgently needed leadership for this revolution. This is concentrated in a major new work from BA to be released December 13:

SOMETHING TERRIBLE, OR SOMETHING TRULY EMANCIPATING:

Profound Crisis, Deepening Divisions, The Looming Possibility Of Civil War—And The Revolution That Is Urgently Needed

Because of the work that BA has done, there is a sweeping vision and concrete blueprint for a liberating society based on a whole different morality where the means of getting there are consistent with those liberatory ends, in the Constitution for the New Socialist Republic in North America.

And because of the work that BA has done, there is a scientific understanding that the world doesn’t have to be this way, that a revolution to overthrow this system and bring into being a whole different emancipating society is possible. More than that—he has forged the strategic approach for making this revolution.

On the basis of this understanding and leadership, the National Revolution Tour is working urgently to seize on this rare time—to spread this revolution and organize people into this revolution.

By donating to the National Tour to Get Organized for an ACTUAL Revolution you have the opportunity to change what direction the future takes.

Los Angeles Revolution Club and others march on May 1, 2021.

To carry out this mission, to build, spread and have major impact reaching into every corner of society—the National Revolution Tour needs your financial support. Donate generously and help raise funds.

** Funds are needed to support the Tour volunteers who come from different backgrounds, ages and parts of the country—now anchored in Los Angeles and leading a national movement. Funds are needed for housing, food, transportation, major printing costs to reach people in every section of society—reaching to the high schools, colleges, youth scenes and throughout the neighborhoods of LA.

** Funds are needed to produce and promote The RNL—Revolution, Nothing Less!—Show where we bring alive the need and possibility of real revolution and the emancipation of humanity through commentaries, interviews, powerful illustrated videos and discussions that provoke, challenge and inspire. This requires funding for studio costs, cameras, lights, editing software and the urgently needed national promotion for this unique, urgent and necessary show to reach people all across the country.

** Funds are needed to contend on social media—fighting the algorithm to break through and influence people with the truth, not repeating garbage that may be “popular” or spreading the lies we are constantly told by the people in power and their mouthpieces in the media and elsewhere. This requires funding for higher-end equipment and professional graphics programs. 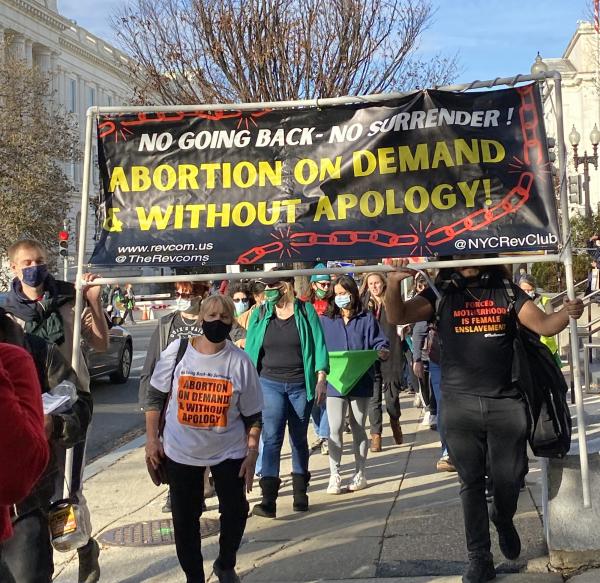 Starting now, through the end of the year—be part of raising funds and organizing forces for revolution—by being part of the Year-End Fund Drive for the National Tour to Get Organized for an ACTUAL Revolution December 4–January 1.

The situation is volatile, millions are agonizing about the future... and this emancipating revolution needs to reach everyone throughout society—with a concrete way to join by contributing and raising funds.

What can you do?

** Thanksgiving dinner, invite your family and friends to watch the special episode of the The RNL—Revolution, Nothing Less!—Show and ask for financial support (you can sustain this show at any level from $3 per month to $100 or more at patreon.com/therevcoms).

** Organize group watchings of the National Fundraising Livestream, Sunday, December 12 to hear from volunteers on the ground with the National Revolution Tour—this will be inspiring and challenging—giving a glimpse of how a force for revolution can change the whole political and social atmosphere.

** If you're going to a family gathering, bring a “revolutionary change jar”—where people can drop in change and more—all giving what they can, and be part of something bigger than themselves. This might open up debate and discussion—use revcom.us and The RNL—Revolution, Nothing Less!—Show as a resource.

** Set up a table at holiday festivals and farmers' markets with a call for contributions. 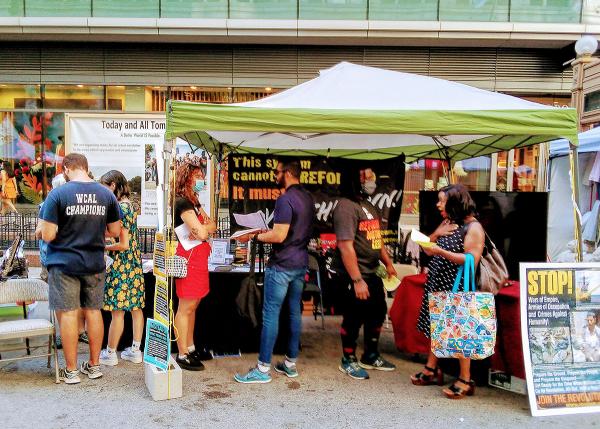 A Revolution Club booth at a street festival on State Street in Chicago.

** Reach out to artists and others who can make in-kind contributions that could be given as a premium on the Livestream.

** Members of the National Revolution Tour are also available via Zoom for potential donors with the resources to make higher-end contributions. Contact us at getorganizedforrevolutiontour@gmail.com if you want to set this up. 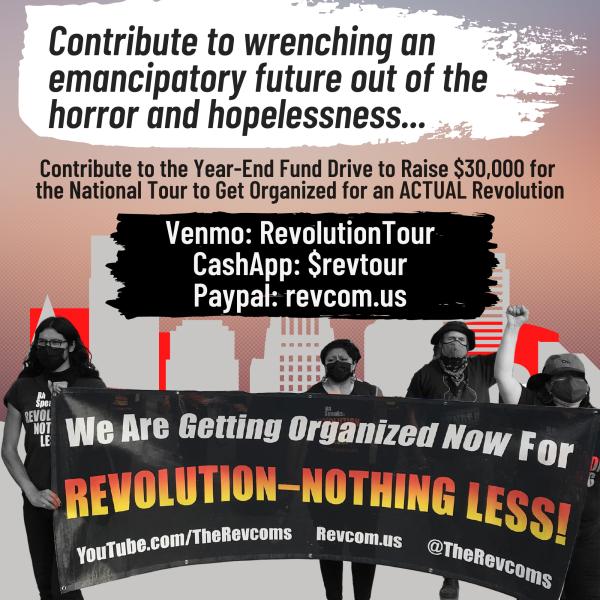