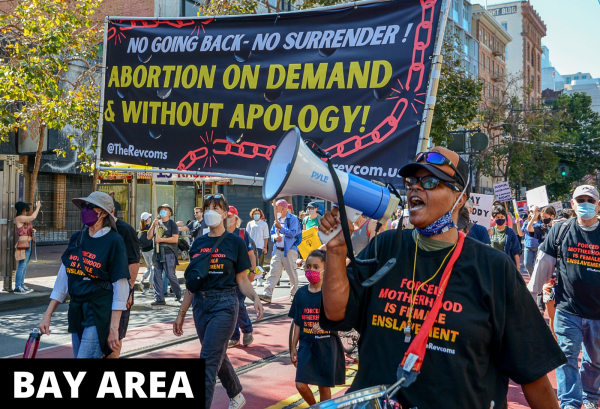 Thank you to everyone who contributed to the Emergency Fund Drive for the National Get Organized for an ACTUAL Revolution Tour and The RNL—Revolution, Nothing Less!—Show in their work to lead the national Break ALL The Chains Contingents: Unleash The Fury Of Women As A Mighty Force For Revolution and for this revolutionary message to reach all those agonizing about the abortion rights emergency, who need to be part of getting organized for revolution.

We exceeded our $15,000 goal, raising $16,950! Your donations, your energy in raising funds, your creativity and determination is appreciated and made a big difference in the reach and impact of the forces getting organized for a real revolution.

We received a number of inspiring statements from people on why they gave and we are sharing here one of these that came with a $1,000 donation and matching challenge from a mental health professional and supporter of the revolution.

Keep raising funds, and send us your ideas—much more is needed to reach throughout society, and raising funds is essential to organizing forces NOW for a real revolution.  Stay tuned to revcom.us for more!

$1,000 Matching Challenge from a Mental Health Professional and Supporter of the Revolution

I know that there are many of you in this country who are outraged by this new rabid, draconian Texas law criminalizing abortion after 6 weeks of pregnancy and deputizing a brutal lynch mob to hunt down [doctors and anyone else helping women get abortions].  This is an emergency!   You and anyone who has an ounce of consciousness about where the world is headed MUST support the only way to break these chains of oppression, revolution, nothing less!  Donate to the Get Organized for an Actual Revolution Tour and I will match your contribution up to $1,000.

You have seen the courage the revcoms bring out into the streets, exposing the truth about the suffering this system brings down on people here and around the world.  Straight up with passion, certitude and conviction! Strategic commanders of this revolution and followers of the deeply humanitarian and farsighted architect of the new synthesis of communism, Bob Avakian. You have the heart to stand with them to support building up a Break the Chains contingent: Unleash the Fury of Women as a Mighty Force for Revolution in the women’s march on October 2nd that is bold, defiant and calling out this system and the leading edge of fascism that this Texas law represents.  You know that this is not at all about any “right to life,” but it is about slamming back women into breeders and handmaids to men.  You hate the white supremacy; the patriarchy, the misogyny, that this all represents. You feel sick as you watch the planet burn, and flood. You are outraged as you see the continued attacks on LGBTQ people and horrified as you bear witness to desperate Haitian refugees getting whipped by border control henchmen, reminiscent of overseers and slave catchers.

Imagine the impact the Revcoms can have bringing the pole of revolution and of the new communism into the larger arena of the national debate at this rare time when revolution is possible!  Imagine captivating the imagination of people yearning for a better world that they can step into this revolution, on the spot, and become organizers as well!  Imagine the power of people breaking out of the killing confines of what this system says is possible and daring to fight for something much better for all of humanity!

Follow your heart! Listen to your conscience! Dare to reach for the highest aspiration of humanity! Donate now to the “Get organized for an actual revolution tour” to help meet this $1,000 challenge.

How to Donate to the National Revolution Tour

Write in to getorganizedforrevolutiontour@gmail.com, let us know if you are taking up collections, or to send statements