Early last week, Iran’s parliament voted overwhelmingly to give “maximum penalty” for Iran’s protesters imprisoned during the past two months' uprising in response to the state murder of Mahsa Amini for “improper hijab.” Their statement calls for delivering “… God's judgments on these enemies of God,” making over 15,000 imprisoned protesters potentially subject to the death penalty.

The very next day, November 8, the head of Iran’s judiciary (Mohseni Eje’i) called for judges to hand out sentences quickly. This is all being justified by calling the righteous rebellion “riots” and protesters as “moharebeh” (i.e., “waging war against God”) which can mean a possible death sentence under Iran’s Islamic fundamentalist Sharia law.

This is a desperate but ominous move by Iran’s regime to stabilize and save their rule by threatening to send Iran’s protesters and political prisoners to the gallows. Some 1,000 protesters are already in rapid-fire, illegitimate mass show trials, some of whom could face the death penalty.

The presiding judge (Abolqasem Salavati) is known as the “judge of death.” Iran’s current judiciary head is Eje’i who was directly involved in the massacre of more than 5,000 political prisoners in 1988. HRANA news reports that at least 336 people have been killed by Iran’s security forces, including over 50 minors or children, since the protests began in mid-September.1 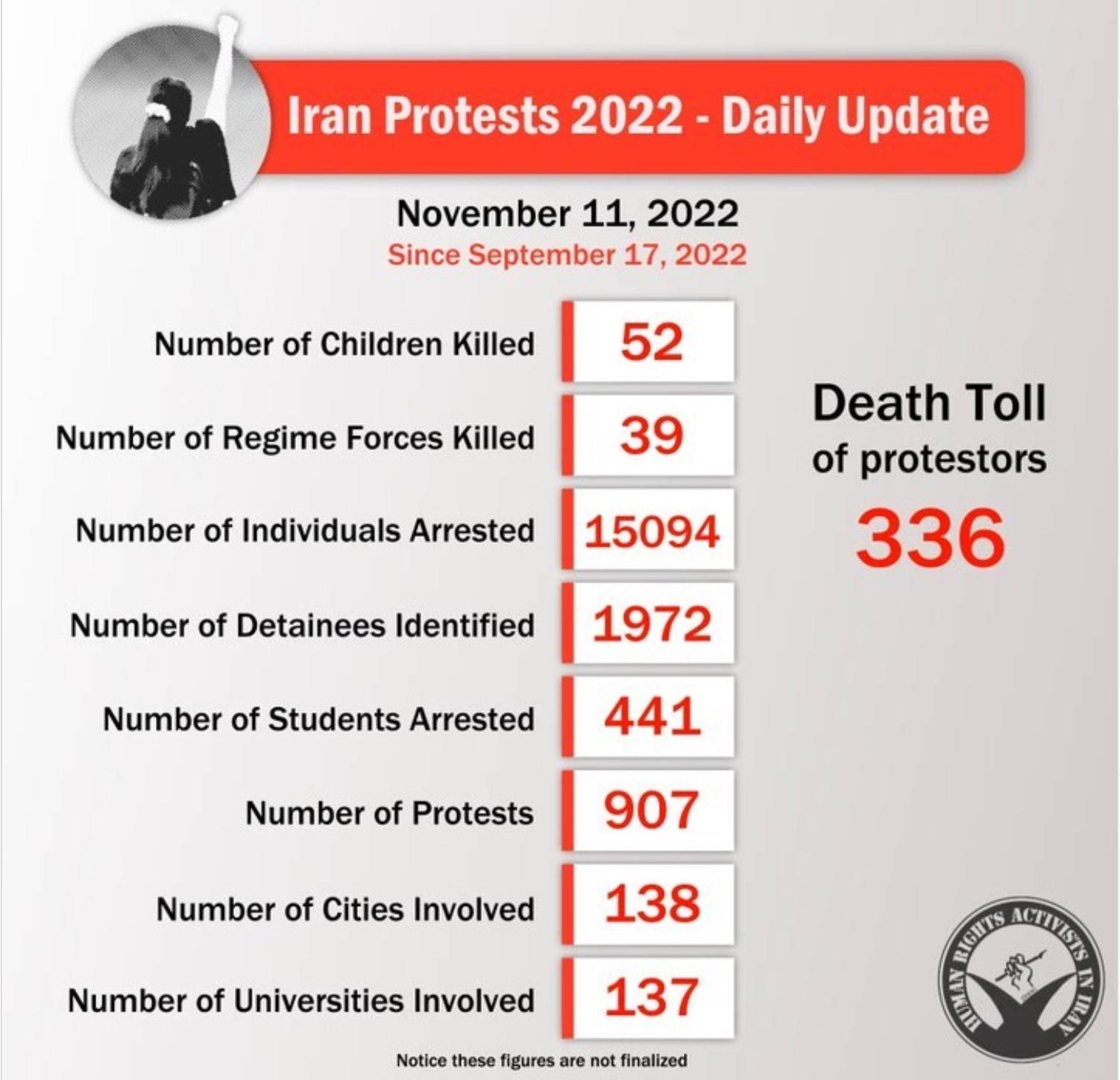 These statistics are clearly incomplete as the regime has shut down much of the internet in Iran and not allowed many independent journalists to report from Iran, in part to hide the full scope of its carnage. Reporters Without Borders lists at least 33 journalists who are locked up in Iran, including Nilufar Hamedi, who had gone to the hospital where Mahsa Amini lay in a coma and drew public attention to the atrocity.

Rebel rapper Saman Yasin is a young Kurdish musician facing execution, on charges of “moharebeh” that carry a potential death sentence, after he posted support for anti-regime protests on social media.

Beloved revolutionary rapper Toomaj Salehi was brutally arrested by the regime’s security thugs on October 30. His family reports that he has been severely tortured. The regime quickly produced a video said to be Toomaj recanting his radical politics, but his family doubts its authenticity as some have noted the person shown in the video has different tattoos than Toomaj. Before his arrest, Toomaj told supporters if he is cuffed, do not be sad but be outraged. His family has called on people to launch a campaign for his life and freedom, saying he has been the people’s voice, now it’s time for us to be his. (Watch this interview he gave to CBC Canada which was aired right before his arrest.) 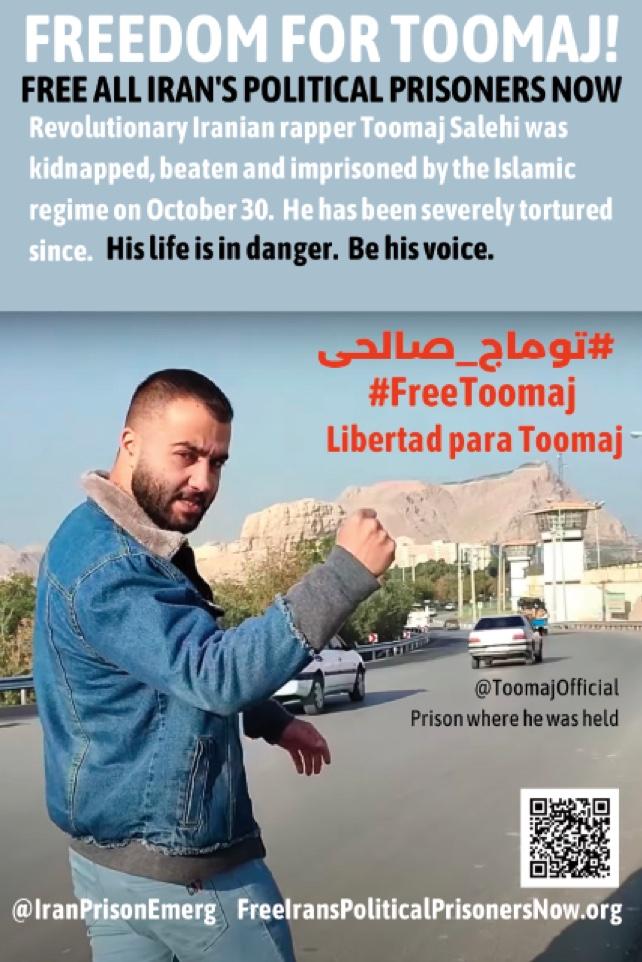 The defiance of Iran’s protesters was as swift as the regime’s calls for executions.

Just days after the Parliament’s vote, students at the Culture and Art University in Tehran issued their reply in a popular chant, saying, “This is a last warning: if you hang anyone, there will be an uprising!” and “Death to the dictator,” referring to Iran’s Supreme Leader Khamenei.

It was announced on November 122 that anonymous youth groups are calling for massive protests with taking over the streets, neighborhoods, highways, high schools, universities and generally the public squares in several cities on Tuesday, November 15 to mark the anniversary of the November 2019 uprising. Human rights groups have reported that more than 1,500 people were massacred by Iran’s security thugs during those 2019 protests against fuel price hikes. 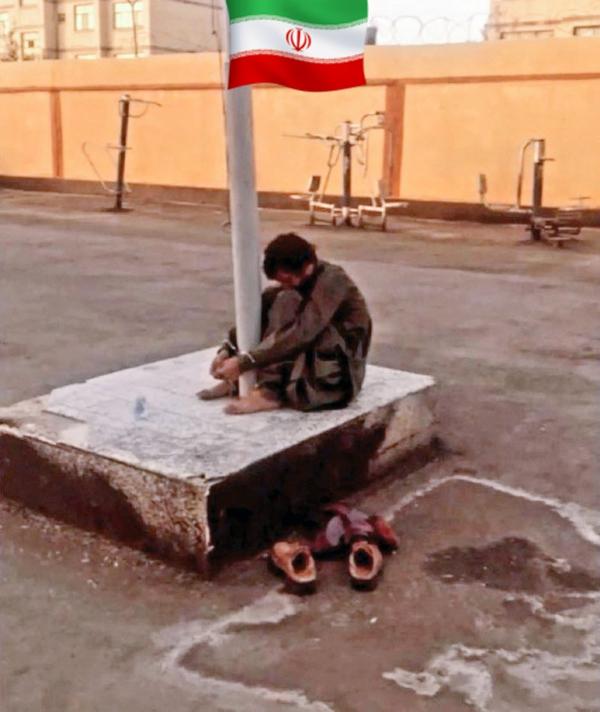 Khodanour Lajai was shackled to a pole, wounded, and allowed to bleed to death for the "crime" of dancing which is outlawed in Iran.

The Baluchi people are an oppressed minority in Iran, who are subjected to severe violence and oppression. The video of Khodanour Lajai of Baluchistan joyfully dancing, was used by the Islamic Republic as evidence to indict him for dancing—which is outlawed in Iran. Khodanour was then shackled to a pole, wounded, and allowed to bleed to death, igniting the anger of tens of thousands in and outside Iran who heard about it.

A powerful installation was staged at the Los Angeles County Museum of Art to commemorate 40 days after the regime’s massacre of almost 100 people in Zahedan, Baluchistan and also referenced Khodanour’s death.

On the heels of Iran’s vote to subject protesters to the death penalty, the IEC issued a statement that said:

The IEC condemns the Iran parliament’s vote demanding the “maximum penalty” for protesters!  We condemn this bloodlust by this medieval theocracy and its reactionary minions, including those men AND women who cling to the Islamic Republic despite their own interests and the interests of humanity. The US imperialist rulers have blood on their hands as well. Their past and present actions helped fuel this outrage—from the coup in 1953 through the deprivation of decades-long sanctions.

The IEC’s Emergency Appeal—"The Lives of Iran's Political Prisoners hang in the balance. We must ACT now!"—is alarmingly relevant.

It needs to be known and promoted everywhere. Take its message onto every social media platform, into every event, and into the streets. If we are serious about "Women. Life. Freedom." we must have the backs of Iran's political prisoners. NO TO EXECUTION OF PROTESTERS!  FREE IRAN'S POLITICAL PRISONERS NOW!

In response to a request by Burn the Cage/Free the Birds campaign in Europe, the IEC is urgently highlighting the global fight for the life and freedom of Toomaj Salehi as part of the overall struggle to free all of Iran’s political prisoners. The IEC has produced palm cards to spread this political battle everywhere. They can be downloaded from the IEC website or ordered by writing to the IEC email. Donate generously and stay tuned to the IEC homepage for new and bold initiatives to win many more people, especially non-Iranians, to join this struggle for justice and a better world.