The Overturning of Abortion Rights Is ILLEGITIMATE!
This Decision Must Not Stand.

Into the Streets to Demand:

The overturning of abortion rights is ILLEGITIMATE! It must not stand!

The state has no right to force women to have children against their will. To treat women’s wombs as sites of surveillance. To hunt down, put on trial and imprison women who are accused of inducing their own abortions. Forced Motherhood = Female Enslavement.

We must Rise Up 4 Abortion Rights NOW! We must fill the streets again and again in massive, sustained and growing nonviolent protest. We must make clear to those in power that we will sooner bring the gears of society to a grinding halt through mass nonviolent resistance than to accept the horror of forced motherhood.

Abortion On Demand & Without Apology! 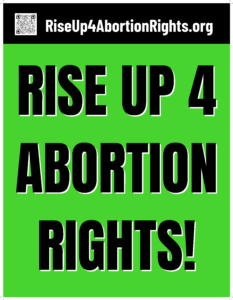