Update, October 20, 2017: The U.S. State Department recently released a few of the documents from the U.S. Embassy in Jakarta around the time of the 1965 massacre in Indonesia. While the newly released documents shed some more light on the U.S. role in the massacre, the U.S. still can’t let out all the truth—more than 50 years after this heinous crime. There are tens of thousands of pages of U.S. embassy documents that have yet to be released. None of the CIA documents have been made public. The coverage in the New York Times of the just-released embassy documents whitewashes the direct U.S. involvement, making it seem as if it was a simply matter of U.S. officials standing by as the massacre was going on. The truth—as gone into in this installment of the American Crime series—is that the Indonesian massacre “was set in motion, backed and orchestrated by the United States.”

Bloated corpses clogged and choked the rivers of Indonesia. Villagers didn’t want to eat anything caught in these waters because human fingers were found inside the fish. This sounds like a horror movie. But this was an American-made reality.

For many months, starting at the end of 1965, the Suharto regime in Indonesia slaughtered people with wild abandon. At least 500,000, perhaps more than a million, people were killed, including members of the Communist Party of Indonesia (PKI), trade unionists, intellectuals, teachers, land reform advocates, ordinary peasants, ethnic Chinese, women, and children. Hundreds of thousands more were arrested and tortured. 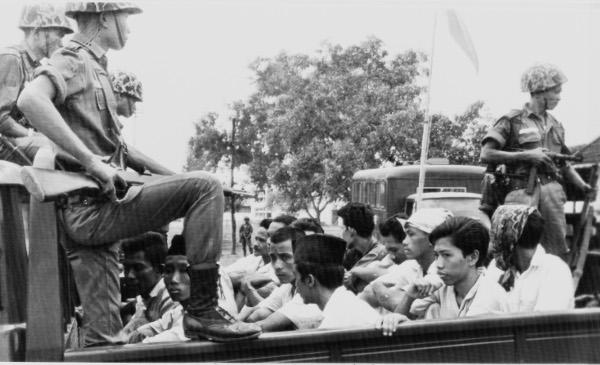 Members of the youth wing of the Indonesian Communist Party being hauled to a Jakarta prison, October 30, 1965. AP photo

This massive bloodbath was set in motion, backed and orchestrated by the United States. The U.S. provided the Suharto regime with equipment, weapons and ultimately tens of billions of dollars. CIA advisers counseled Indonesian generals. Top U.S. Embassy officials compiled and approved a list of those who might oppose the new regime and this HIT LIST with 5,000 names was handed over to the Indonesian military. Then during the slaughter, U.S. advisers coldly calculated and assessed the progress—methodically checking the names of the dead, one by one, off the list.

Robert J. Martens, a former member of the embassy’s political section who was responsible for compiling the lists and turning them over to the Indonesian military, said in an interview, “It really was a big help to the army. They probably killed a lot of people, and I probably have a lot of blood on my hands, but that’s not all bad. There’s a time when you have to strike hard at a decisive moment.”

By the end of January 1966, the deputy CIA station chief in Indonesia said the checked-off names were so numerous that CIA analysts in Washington concluded that the leadership of the PKI had been destroyed.

Thousands in the Suharto government carried out this massacre, and many U.S. operatives were there behind the scenes, facilitating the carnage. But U.S. president Lyndon Johnson was ultimately responsible for calling the shots, and he was clearly pleased with the horrific outcome. The New York Times described the Johnson administration’s “delight with the news from Indonesia” and the private responses of U.S. officials who were “elated to find their expectations being realized.” President Johnson’s secretary of state, Dean Rusk, cabled his encouragement to the U.S. Embassy in Jakarta. The “campaign against the communists,” he wrote, must continue as the military “are [the] only force capable of creating order in Indonesia.” The U.S. ambassador replied that he had assured Suharto and his generals “that the U.S. government [is] generally sympathetic with, and admiring of, what the army is doing.”

CRIMINAL PAST: In the early 1960s, the U.S. laid the groundwork for massive repression. An April 1962 meeting between American and British officials resulted in a consensus “to liquidate Sukarno.” The U.S. trained thousands of Indonesian army officers. The CIA built networks of agents and informants in the trade unions, where the PKI had a lot of influence. According to former CIA agent Ralph McGehee, “[In 1963] U.S.-trained Indonesian trade unionists began gathering the names of workers who were members or sympathizers of unions affiliated with the national labor federation, SOBSI. These trade unionist spies laid the groundwork for many of the massacres of 1965-1966. The CIA also used elements in the 105,000 strong Indonesian national police force to penetrate and gather information on the PKI.” (Covert Action Quarterly, Fall 1990)

The reactionary pro-U.S. regime of Suharto seized power after a failed military coup. Before this, Sukarno led a nationalist coalition government in which the Communist Party of Indonesia (PKI) played a prominent role. The PKI didn’t advocate armed revolution, but the U.S. saw them as a threat to be eliminated. Suharto claimed the attempted military coup was part of a nationwide conspiracy to commit mass murder. This became the pretext for a massacre that targeted the PKI but also killed trade union activists, youths and women’s groups, peasants in remote villages, progressive intellectuals, students and others who the regime claimed were “murderers and accomplices” in this so-called conspiracy.

In Their Own Words:

“It really was a big help to the army. They probably killed a lot of people, and I probably have a lot of blood on my hands, but that’s not all bad. There’s a time when you have to strike hard at a decisive moment.”

In the early 1960s, U.S. imperialism faced huge challenges. U.S. efforts to crush the revolution in China had failed and a new government led by Mao had come to power in 1949—with one quarter of humanity building a socialist society, inspiring people around the world. In the early 1950s, the Chinese Army stopped the U.S. Army cold in its move into northern Korea, and delivered a historic defeat on the world’s most powerful imperialist army. Throughout Asia, Africa, and Latin America, national liberation struggles rose in armed revolution against colonialism and imperialism, and often put forward socialism and communism as the ultimate goal of their struggle.

The U.S. was very worried about maintaining control in Southeast Asia, where Indonesia is located. With socialist China to the north and the growing struggle for national liberation in Vietnam, U.S. rulers felt compelled to crush any other spark of rebellion or possible trouble for them. The U.S. could not allow the Sukarno coalition government, in which the Communist Party of Indonesia played a prominent role. It needed to try and crush growing unrest and anti-U.S. sentiment. In March of that year,1965, students had taken over the U.S. Embassy in Jakarta to protest the murder of Malcolm X. Right before the coup, U.S. President Johnson spoke about the need for the U.S. to take on the “communist threat,” saying, “There are great stakes in the balance. Most of the non-Communist nations of Asia cannot, by themselves and alone, resist the growing might and the grasping ambition of Asian communism. Our power, therefore, is a very vital shield.”

And so, as many as one million people were slaughtered and the people of Indonesia were subjected to a 40-year rule of military terror (which included a terrible genocide against the people of East Timor, as well as other crimes): all in the service of what the imperialists deemed to be in their interests.