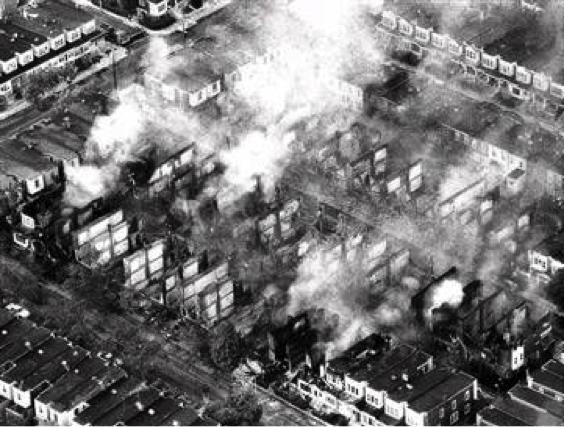 THE CRIME: 5:35 am, May 13, 1985. Philadelphia Police Commissioner Gregore Sambor aims his bullhorn at the house at 6221 Osage Avenue and declares: “Attention MOVE! This is America.”

Seven adults and six children, members of the MOVE organization, were in their home. Outside, hundreds of heavily armed police and city officials surrounded them.

Fifteen minutes later the police assault began. Explosives blew holes in the side of the house and tear gas was pumped in; fire hoses streamed water onto the roof. Police opened fire with over 8,000 rounds from handguns, Uzis, and anti-tank weapons. There was no solid evidence that the people inside ever fired a shot.

When the occupants still did not come out, a police helicopter hovered over the roof and dropped a powerful bomb. The roof burst into flames so hot that homes across the street ignited. Flames raced downward through the MOVE house toward the people huddled in the basement. The fire trucks on hand did nothing to stop the fire, which then quickly spread to the surrounding homes.

The MOVE house became an unbearable hell of intense heat, fire, tear gas. and smoke. Some residents burst outside, but were met by police gunfire and either killed or forced back into the flames, to be burned alive.

By the end, five children ages 9 to 14 were murdered by the police, as were six adults, their bodies mostly in pieces. Sixty-one homes were burned; 250 people rendered homeless. The one adult who survived—Ramona Africa—was arrested and served seven years in jail. The one child survivor was torn from those who love him and put in foster care. 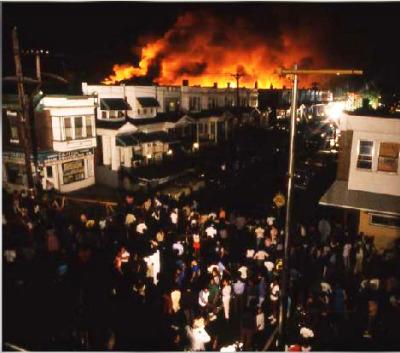 As the neighborhood burned, hundreds gathered in the street, indicting the police and chanting "Murderers! Murderers!"

THE CRIMINALS AND CO-CONSPIRATORS: Mayor Wilson Goode, the first Black mayor of Philadelphia, authorized and oversaw the massacre, along with other city leaders, which included former generals, and FBI agents.

The Philadelphia Police Department carried it out.

The FBI took part in the months of planning that went into this atrocity, and provided the city with the military-grade C-4 explosives for the bomb and other heavy weaponry.

The news media collaborated, before and after the crime, in painting MOVE as “dangerous terrorists” who left the authorities “no choice” except a full-scale military assault.

THE ALIBI: Philadelphia authorities claimed that MOVE was a violent terrorist organization, holding a peaceful neighborhood hostage. The city claimed that it “just wanted to protect the neighborhood,” and that MOVE was digging a network of tunnels, building a weapons stockpile and plotting a major incident, perhaps a hostage taking. They further claimed that MOVE “wanted a violent confrontation” and the city was just responding to that threat. According to then-district attorney Ed Rendell, “These are people who essentially committed suicide, and murdered their own children.” 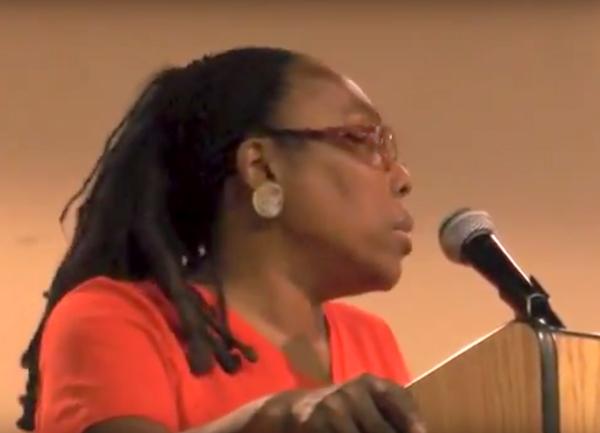 While the perpetrators of this horrendous crime – the mayor and the police – walked free, the only adult survivor, Ramona Africa (shown here speaking in 2014), was arrested and spent seven years in prison for refusing to renounce MOVE, while the surviving child, Birdie Africa, was seized by the system and taken away from his family. Photo: YouTube

THE ACTUAL MOTIVE: MOVE was a Black radical organization formed in the early 1970s that refused to respect present-day America and its prevailing values. It exposed the rulers of this society for the liars, racists and murderers they are, denounced their brutal police, and talked about “revolution.”

MOVE thought of revolution as changing people’s thinking and behavior, not overthrowing the whole system, and MOVE’s political actions were peaceful. But when MOVE members were threatened and confronted by the authorities, they did not back down. The rulers of this system considered this to be intolerable, especially coming just a few years after the U.S. had been rocked by mass rebellions of Black people.

Over a year before the May 13 attack, city authorities began meeting and planning how to put a stop to MOVE once and for all—these plans included building models of the MOVE house and practicing exploding it!

Mayor Goode said: “If I had to make the decision all over again, knowing what I know now, I would make the same decision because I think we cannot permit any terrorist group, any revolutionary group in this city, to hold a whole neighborhood or a whole city hostage. And we have to send that message out loud and clear, over and over again...” (Emphasis added.) Never mind the fact that the most common definition of terrorism is the murder of innocent civilians for a political purpose—and that MOVE never did anything remotely resembling that, while Goode committed exactly that crime in his bombing.

The MOVE massacre is not the first time this system has bombed and burned out rebellious Black people.

In June 1921, in Tulsa, Oklahoma, a white mob attempting to lynch a Black prisoner was stopped, partly by Black residents armed with shotguns. In response, white supremacists went on a rampage. A mob of over 1,000—and including police—stormed the Greenwood area, at that time known as the “Negro Wall Street” because of its vibrant Black-owned economy. Looting, burning, and shooting people, the mob met fierce resistance from armed Blacks. The police commandeered a half-dozen small planes, supposedly to provide surveillance for their attack, though many reported that the planes also dropped explosive and incendiary devices on the Black community.

By the time it was over, up to 100 Black people had been murdered, and perhaps two dozen of their white attackers killed. The population of Greenwood had been rounded up by police and forced into detention centers. The whole neighborhood, including 1,256 homes, had been burned to the ground; only a few buildings survived.

Taken in by an unending media and police campaign against MOVE and shocked by the scale of violence unleashed against MOVE, too many people stood by paralyzed and did not rise up in response. A "Draw the Line" statement, initiated by Carl Dix and others, was signed by more than 100 prominent Black figures and others denouncing the collusion of Black elected officials in the repression of the Black community. 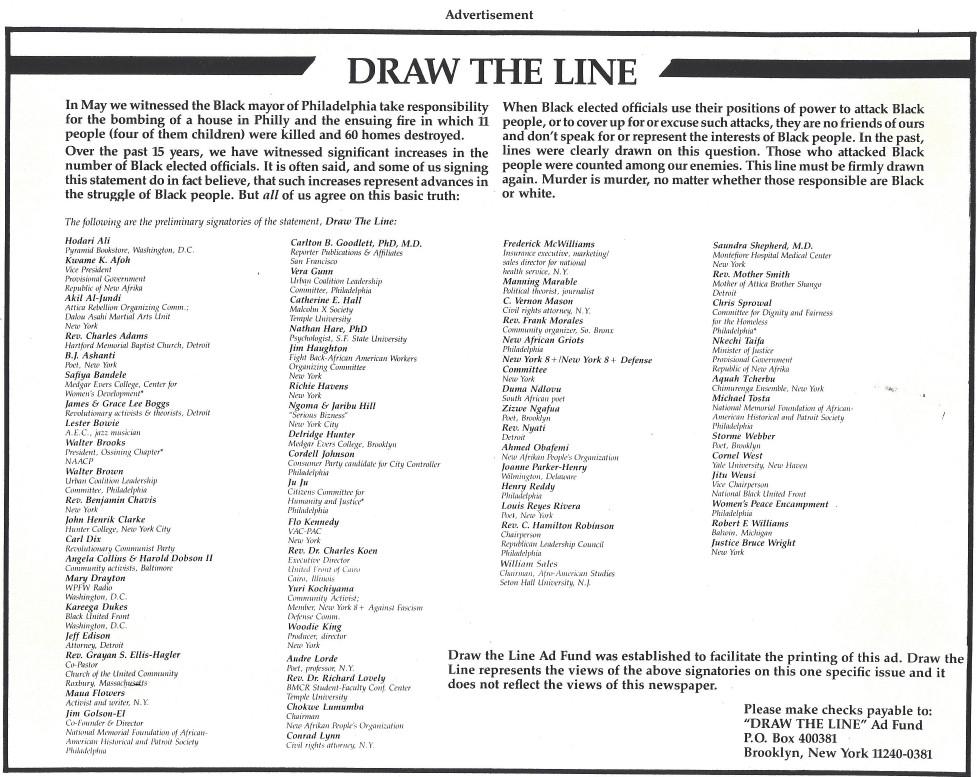