Britain moved to destabilize Mossadegh’s government, including by launching an international boycott of Iranian oil. The U.S. soon joined the coup plotting, conspiring with Iran’s Mohammad Reza Shah [King] Pahlavi and the military, and orchestrating an anti-Mossadegh propaganda campaign. 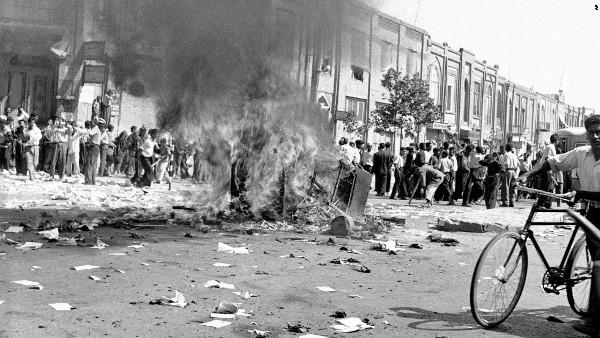 In Tehran, Iran on August 19, 1953, mobs joined by the military took over streets chanting “Long live the Shah! Death to Mossadegh!” They ransacked pro-Mossadegh newspapers and attacked his supporters.

On August 19, mobs joined by the military took over streets chanting “Long live the Shah! Death to Mossadegh!” They ransacked pro-Mossadegh newspapers and attacked his supporters. Street battles raged. By late afternoon, military units seized control of Mossadegh’s house, breaking the resistance. By evening, 300 lay dead, as General Fazlollah Zahedi rode to Radio Tehran atop a tank and broadcast that with the Shah’s blessing, he was the new prime minister.

Iran’s nationalist upsurge was crushed. The Shah ruled as an iron-fisted U.S. puppet for 25 years. Speaking out risked arrest by SAVAK, his U.S.-trained secret police. Thousands were murdered, jailed or barbarically tortured—they even threatened to torture children in front of their parents. When millions rose against the Shah in 1978-79, he shot down thousands with U.S. backing before being ousted. The 1953 coup and what followed ended up helping pave the way for a new Iranian nightmare: the 1979 founding of the Islamic Republic of Iran.

THE CRIMINALS: After covering up for 60 years, the CIA admitted in 2013:

The military coup that overthrew Mosaddeq and his National Front cabinet was carried out under CIA direction as an act of US foreign policy, conceived and approved at the highest levels of government.

In the U.S., that meant President Dwight Eisenhower on down through the State Department, the CIA, and the military. In Britain, Prime Minister Winston Churchill and on down.

THE ALIBI: For decades, the U.S. and British rulers covered up and lied about having orchestrated the anti-Mossadegh coup, and their media cover story turned reality upside down. It portrayed this U.S.-led fascist military coup against a widely supported, elected leader as a popular “revolution” against a Hitler-like lunatic trying “to make himself unchallenged dictator of the country,” as the New York Times put it.

In Their Own Words: “We helped bring about was the restoration of the Shah to power in Iran and the elimination of Mossadegh. The things we did were ‘covert.’ If knowledge of them became public, we would not only be embarrassed in that region, but our chances to do anything of like nature in the future would almost totally disappear ... we may really give a serious defeat to Russian intentions and plans in that area.”

THE ACTUAL MOTIVE: A CIA memo spelled out U.S. goals: “to effect the fall of the Mosaddeq government; and to replace it with a pro-western government under the Shah’s leadership with [General] Zahedi as its prime minister.”

The U.S. used the 1953 coup to muscle into Iran and replace Britain as top dominator. Mossadegh’s nationalization was reversed, and U.S. oil giants were cut in on the spoils, reaping enormous profits. The coup was a warning against similar moves to nationalize imperialist companies. And it embedded Iran as a key military outpost for the U.S. against regional liberation struggles and in its Cold War clash with the Soviet Union.

REPEAT OFFENDERS: In 1979, the Shah was overthrown and replaced by the Islamic Republic of Iran (IRI), a regime that, while reactionary, was viewed by the U.S. as an obstacle to its immediate interests. In the decades since, the U.S. has bullied, intervened, and threatened Iran. It fueled the bloody 1980-1988 Iran-Iraq war, which left a million dead or wounded, to weaken both. In 1988, as a warning to Iran to halt the war, the U.S. warship Vincennes “accidentally” shot down an Iranian civilian airliner, killing all 290 on board. Since then, the U.S. has imposed punishing sanctions and threatened war repeatedly, and it still seeks to dominate and control Iran.