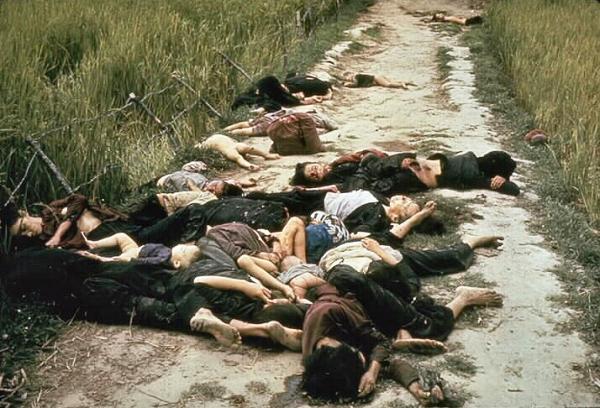 THE CRIME: On Saturday morning, March 16, 1968, 100 soldiers from Charlie Company, U.S. Army Americal Division, entered and took over My Lai, a small hamlet in Vietnam’s countryside. “We met no resistance and I only saw three captured weapons... It was just like any other Vietnamese village—old papa-sans, women and kids,” a soldier said.

“The order we were given was to kill and destroy everything that was in the village,” another soldier later testified. “It was clearly explained that there were to be no prisoners.” An order was given to push all the Vietnamese who had been forced into the area into a ditch. “I began shooting them all. I guess I shot maybe 25 or 20 people in the ditch,” one G.I. later recounted, “men, women, and children. And babies.” A baby crawling away from the ditch was grabbed and thrown back into the ditch and shot.

“Over four hours, members of Charlie Company methodically slaughtered more than five hundred unarmed victims, killing some in ones and twos, others in small groups, and collecting many more in a drainage ditch that would become an infamous killing ground,” Nick Turse, author of Kill Anything That Moves: The Real American War in Vietnam, writes. “They faced no opposition. They even took a quiet break to eat lunch in the midst of the carnage. Along the way, they also raped women and young girls, mutilated the dead, systematically burned homes, and fouled the area’s drinking water.”

THE CRIMINALS: U.S. Presidents Kennedy, Johnson, and Nixon all authorized and escalated the war. Robert McNamara, Johnson’s Secretary of Defense, oversaw massive troop and bombing escalations. General William Westmoreland, the overall commander of U.S. forces in Vietnam. Colin Powell, then an Army major, carried out a cover-up of atrocities by the Americal Division (one of which was My Lai). And far too many more functionaries of the U.S. imperialist state to name here.

“In direct refutation of this portrayal is the fact that relations between Americal Division soldiers and the Vietnamese people are excellent.”
—Major Colin Powell, 1968 report on charges of Americal Division atrocities.

“One of the most painful chapters in our history was Vietnam—most particularly, how we treated our troops who served there.... [Y]ou wrote one of the most extraordinary stories of bravery and integrity in the annals of military history.”
—President Barack Obama, May 28, 2013, part of the Vietnam War Commemoration

THE ALIBI: The U.S. claimed the 1961-1975 Vietnam War was being fought to defend free and democratic South Vietnam from an invasion by communist North Vietnam. In fact, Vietnam was one country that had been temporarily divided. Under the Geneva Accords, North and South Vietnam were supposed to be reunified in the 1950s, but this was blocked by then-President Dwight Eisenhower because he was convinced that most Vietnamese would vote for Ho Chi Minh, the communist leader of North Vietnam.

The military described My Lai as victory: “U.S. infantrymen had killed 128 Communists in a bloody day-long battle,” Stars and Stripes magazine reported. GIs who attempted to expose the truth were denounced as “traitors” in Congress.

Journalist Seymour Hersh exposed the My Lai massacre in November 1969. The ensuing furor forced the military to conduct an investigation, which treated My Lai as an isolated incident, and blamed the officers in charge of Charlie Company. Twenty six soldiers were charged with criminal offenses, but only Lieutenant William Calley Jr., a platoon leader in C Company, was convicted. For killing 22 villagers, he spent two days in jail, and three and a half years under house arrest.

THE ACTUAL MOTIVE: My Lai was not an isolated incident—it was a concentration of the way the U.S. waged the Vietnam War.

During this period, national liberation struggles were raging in Asia, Africa, and Latin America, with many led by communists or with a strong communist presence. The U.S. was the world’s main imperialist superpower and was determined to crush these struggles to ensure its domination of these regions. The Vietnam War was also aimed at encircling revolutionary China, and contending with the then-imperialist Soviet Union.

Mass murder of Vietnamese people was the policy, the military doctrine, of the war the U.S. waged in Vietnam, as Turse documents in his book. My Lai was, as Turse quotes a soldier, “an operation, not an aberration.”

In 1995, the government of Vietnam released figures saying it estimated two million civilians and one million soldiers were killed during the war. Yet, in spite of this multi-dimensional horrific onslaught that lasted well over a decade, the U.S. lost the war.

REPEAT OFFENDER: U.S. patrols like Charlie Company regularly killed everyone and everything within farming villages. The U.S. dropped more than seven million tons of bombs—double the tonnage dropped during World War 2—on a country roughly the size of New Mexico. It dumped over 20 million gallons of a highly toxic chemical defoliant called “Agent Orange” on forests and farmlands to destroy the ability of Vietnamese peasants to sustain themselves and their families. It rained some 300 million anti-personnel cluster bombs—”slaughter, spring loaded into little cans”—on Vietnam and the neighboring countries of Laos and Cambodia. It dropped 373,000 tons of napalm—jellied gasoline that burns at over 2,000 degrees Fahrenheit—on the Vietnamese people, burning their flesh to the bone and causing agonizing pain and almost certain death.