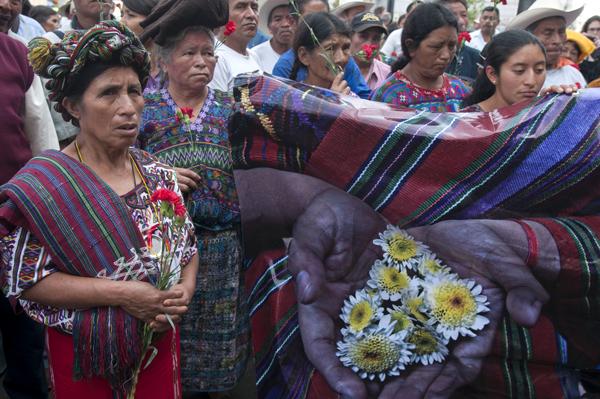 THE CRIME: In the early 1980s, following a U.S.-backed coup by General José Efraín Ríos Montt, the Guatemalan military systematically destroyed more than 600 indigenous Mayan villages in the highlands of the country. Seventy-five thousand people, overwhelmingly Mayans, were slaughtered under Ríos Montt in this small, impoverished country in Central America. Soldiers ripped the hearts out of children as their bodies were still warm and piled them on a table for their parents to see.

THE CRIMINALS: Two Truth Commissions—one sponsored by the Roman Catholic Church and the other by the United Nations—documented widespread massacres, rape, torture, and acts of genocide carried out under Ríos Montt. In 2013, Ríos Montt was tried and convicted in Guatemala City of genocide, in particular the murders of 1,771 Ixil Indians. A higher court, filled with Ríos Montt’s political allies, overturned his conviction.

The United States has never been held accountable for its role in any way. The CIA advised, trained, and helped to run the Guatemalan forces who carried out these massacres and provided “technical assistance”—communications equipment, computers, and special firearms. The Green Berets instructed Guatemalan Army officers at the U.S. School of the Americas in Panama. And when the genocide in Guatemala threatened to expose the nature of the U.S. and its ally, the U.S. subcontracted much of the dirty work to Israel, which supplied transport to remote villages, war planes, military training, “advisors,” and 10,000 Galil assault rifles.

Everything Ríos Montt did was orchestrated, embraced, endorsed, and backed by the U.S.—with ghoulish gusto by President Ronald Reagan. At a time when the massacres were becoming an international scandal, Reagan declared Ríos Montt ‘‘a man of great personal integrity and commitment.” He said Ríos Montt was “getting a bum rap” from human rights activists. Reagan was never put on trial for his role in these and other crimes against humanity. Instead, he is promoted as one of the most honored and revered U.S. presidents of modern times—praised by Democrats and Republicans alike.

Ríos Montt was a favorite of the leaders of the Christian fascists in the U.S.—Pat Robertson and Jerry Falwell—who vigorously supported Reagan’s backing of Ríos Montt’s military dictatorship. Ríos Montt became a minister in the California-based Evangelical/Pentecostal Church of the Word after leaving the Catholic Church in 1978. Robertson praised Ríos Montt’s “enlightened leadership” and claimed the dictator insisted on “honesty in government.” A week after Ríos Montt seized power, Robertson flew to Guatemala to give him his first interview and aired it on the Christian Broadcasting Network’s program The 700 Club. Robertson was in Guatemala three days after the coup and claimed the people were “dancing in the street for joy, fulfilling the words of [the Bible]... When the righteous are in authority, the people rejoice.”

THE ALIBI: Reagan claimed Ríos Montt was “confronting a brutal challenge from guerrillas armed and supported by others outside Guatemala.” Reagan called this genocidal slaughter an effort to “restore democracy and to address the root causes of this violent insurgency” and to “improve the quality of life for all Guatemalans and to promote social justice.”

Christian fascists in the United States provided an alternate alibi: A pastor with the California-based church that Ríos Montt belonged to told a group investigating the atrocities, “The [Guatemalan] Army doesn’t massacre the Indians. It massacres demons, and Indians are demon possessed; they are communists.”

THE MOTIVE: After emerging as an imperialist power in the late 1800s, the U.S. enslaved the peoples of Central America, including Guatemala, on plantations and in sweatshops. The U.S. declared that Central America, as well as Mexico, was its own “backyard” to exploit and dominate politically and militarily as it contended with rival oppressors.

The U.S.-backed genocide in Guatemala was aimed at crushing a popular insurgency against a viciously oppressive regime which could have threatened the U.S.’s grip over the country. This was made all the more urgent for the U.S. rulers by the influence of their rival imperialist power, the Soviet Union, in Guatemala, and in other Central American insurgencies, at a time when the two imperialist superpowers were in a furious and extremely intense fight for world domination, which at that time held a real possibility of world war. In this situation, the U.S. lashed out with torture and genocide.

REPEAT OFFENDER: In 1954, the U.S.-engineered a coup in Guatemala that overthrew elected president Jacobo Árbenz because his government nationalized unused land held by United Fruit, a U.S. corporation, to distribute to peasants. By the late 1960s, the Pentagon had as many as 1,000 Special Forces troops in Guatemala, carrying out a massive counterinsurgency against anti-government guerrillas. Death squads were created on the urging of the head of the U.S. military mission in Guatemala. Over decades, monstrous spasms of state-sponsored violence took the lives of 200,000 people, more than 80 percent indigenous Mayan peasant farmers.

Other popular uprisings in the 1980s against vicious Central American regimes were also drowned in blood by the U.S. imperialists and U.S.-sponsored death squads and terrorists. In El Salvador, U.S.-backed regimes of Roberto d’Aubuisson and José Napoleón Duarte killed over 75,000 people. Nicaragua saw nearly 50,000 casualties through the 1980s as counter-revolutionary “Contra” military forces, secretly funded by Reagan, carried out terrorist attacks aimed at bringing down the Sandinista government, which had overthrown the pro-U.S. dictator Anastasio Somoza in 1979.

These crimes against humanity form the backdrop for the desperate situation today in Central America that is driving people to risk their lives to escape the hellish conditions that have been “made in the USA.”