THE CRIME: In the early morning hours of November 8, 2004, the U.S. launched “Operation Phantom Fury”—a massive air and ground assault on Fallujah.

Weeks before, the U.S. military had cut off entry and exit from Fallujah, which was home to 300,000 people. U.S. Marine and Army troops poured thousands of artillery rounds, hundreds of rockets, bombs, and missiles, and nearly 100,000 machine gun and cannon rounds into this densely populated city. A U.S. Marine sergeant warned, “We’ll unleash the dogs of hell, we’ll unleash ‘em... They don’t even know what’s coming—hell is coming! If there are civilians in there, they’re in the wrong place at the wrong time.”

On November 8, “The sky over Fallujah seems to explode,” one newspaper reported, as a massive bombing assault was unleashed. This bombing campaign included anti-personnel cluster bombs and white phosphorous—a chemical firebomb that can melt skin and burn right down to the bone. U.S. officials at first denied it, but were later forced to admit they’d been used. Using these weapons against people is illegal under international law, and their use constitutes a war crime.

Then came a ground assault by armored bulldozers that tore up all the main streets of the city, and troops that shot at anything that moved, going “house to house, room to room, raining death and destruction on the proud, ancient ‘City of Mosques,’” the Guardian reported. By November 16, the Marines were in control of most of the city. 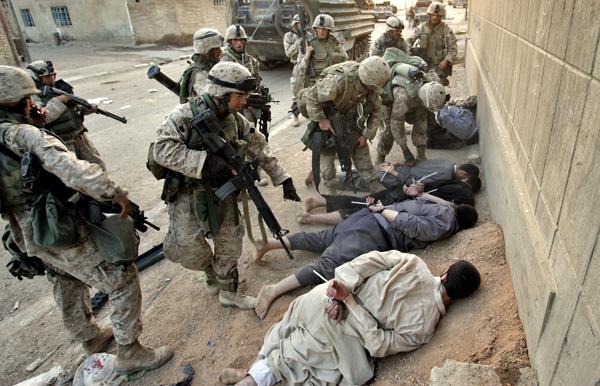 Reporters who entered Fallujah afterward described a “wasteland” of “utter ruin,” with desperate dogs and cats feeding on corpses in the streets. As many as 2,000 Iraqis—labeled “insurgents” by the U.S.—plus 800 or more civilians were killed. The once-crowded city lay empty and broken with 60 percent of its buildings damaged or destroyed: “36,000 homes, 9,000 shops, 65 mosques, 60 schools, both train stations, one of the two bridges, two power stations, three water treatment plants and the city’s entire sanitation and telephone systems,” according to the Fallujah Compensation Committee.

Two hundred thousand people had been forced from the city—first by the blockade, then the cutting off of water and food, then the threats of invasion, and finally by the assault itself—and then they were scattered across war-torn central Iraq, often in sprawling, unplanned tent cities where there were already outbreaks of diseases, including typhoid.

“Kick ass! If somebody tries to stop the march to democracy, we will seek them out and kill them! We must be tougher than hell! This Vietnam stuff, this is not even close. It is a mind-set. We can’t send that message. It’s an excuse to prepare us for withdrawal.... There is a series of moments and this is one of them. Our will is being tested, but we are resolute. We have a better way. Stay strong! Stay the course! Kill them! Be confident! Prevail! We are going to wipe them out! We are not blinking!”

“Innocent civilians in that city have all the guidance they need as to how they can avoid getting into trouble.”

THE CRIMINALS: U.S. President George W. Bush, who told his generals: “Kick ass! If somebody tries to stop the march to democracy, we will seek them out and kill them! We must be tougher than hell! This Vietnam stuff, this is not even close....”

Vice President Dick Cheney, who called the invasion and occupation of Iraq “one of the most extraordinary military campaigns ever conducted.” Donald Rumsfeld, Bush’s “Defense” Secretary, who said the destruction of Fallujah would not “stop without being completed.” Generals Richard F. Natonski, Keith Stalder, and James Mattis, who commanded U.S. forces.

The U.S.-appointed Iraqi Interim Government, which authorized the attack.

THE ALIBI: The U.S. claimed it was freeing the people of Fallujah from the grip of a small group of foreign terrorists and was taking great care to protect civilians.

THE ACTUAL MOTIVE: To crush Sunni-based forces aligned with the former Iraqi regime of Saddam Hussein who were resisting the U.S. occupation. To collectively punish the people of Fallujah and terrorize Iraq's six million Sunnis. And to serve as an "object lesson," as one ex-Army officer put it, about U.S. power and its willingness to use it for any and all in the region and beyond.

REPEAT OFFENDER: After Operation Phantom Fury, the U.S. military claimed it had “broken the back” of the anti-U.S. resistance. But they hadn’t, and have been working ever since with the reactionary Iraqi government to once again take over Fallujah, now under ISIS control. As of now, another bloody assault is imminent, backed by the U.S., Iranian, and Iraqi governments. Human rights groups report that the ongoing siege of the city has drastically cut food supplies and at least 50,000 people are facing starvation and death.