American Crime Case #92: Ronald Reagan Condemns 180,000 Gay Men and Others to Demonization, and Death by AIDS

In 1981, at the beginning of the Ronald Reagan presidency, an AIDS epidemic broke out in the United States. For four years, Reagan studiously refused to even utter the word “AIDS” in public. By 1987, the first time Reagan would address AIDS with any substance, the plague had killed over 180,000 people in the U.S. (Figures from the Centers for Disease Control.)

The toll was excruciating. Friends and lovers saw each other stricken by (what at first was) a terrifyingly mysterious disease that left people wasted away, unable to eat, covered with cancerous sores and—in every case—dead.

Many of the early victims of AIDS were gay men. Others were Haitian immigrants, or concentrated among prostitutes and intravenous drug users. They were all human beings, but their lives mattered little if at all to those who rule this country. Instead of urgent research for a cure, and compassionate care, they were subjected to prejudice, discrimination, and hate. 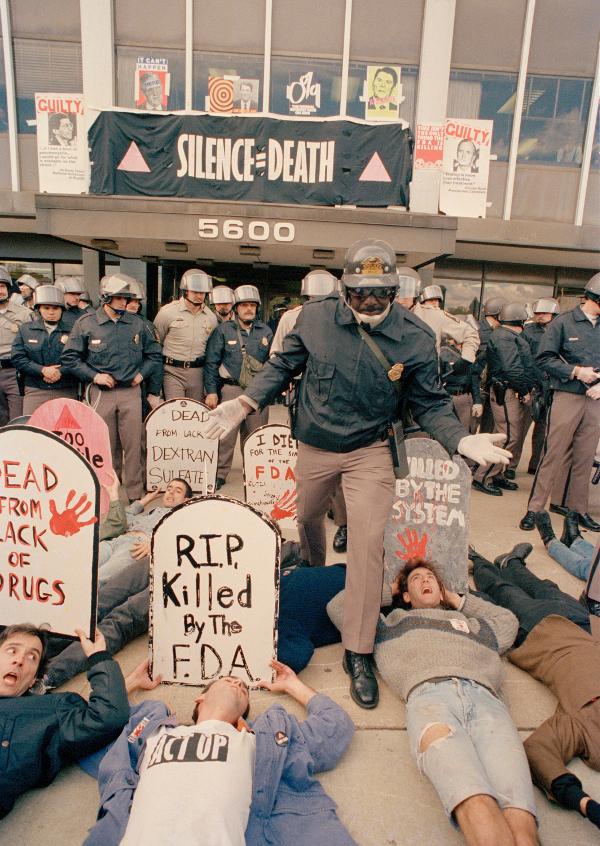 ACT UP demonstrators, angry with the government's response to the AIDS crisis, shut down the Food and Drug Administration, Rockville, MD, October 1988. (AP photo)

Research efforts proceeded at a criminally slow pace for years, blocked by a lack of sufficient government funding, and a competition-for-profit-driven pharmaceutical industry that, at that time, didn’t see a sufficient “market” for AIDS treatment. The impact of millennia of prejudice against gays—which persists in virulent ways under capitalism—cast an ugly shadow over how too many people in society in general responded to AIDS, especially at first. Those in the gay men’s community who were on the frontlines of fighting AIDS had to—and heroically did—go right up on the face of that, with a profound and positive impact on society.

Victims died in homeless shelters, untreated. They died when they were kicked out of hospitals when their insurance ran out. They too often died alone—cast off by a society that made them pariahs because of their sexual orientation, their nationality, or their existence on the margins of society. They died because they feared getting tested—under constant threat of being rounded up by the government.

The criminal element is that thousands and thousands of people, in the richest country on earth, suffered far more than they should have had to, and died unnecessarily of AIDS during the Reagan years. Even before the nature and causes of AIDS were known, even before AIDS was identified as a specific disease, activists in the gay community, public health workers, and others identified sexual practices and other activity (like sharing needles) as forms through which the disease was spread. They developed popular forms of sex education and action—including free distribution of condoms—that saved lives. But their efforts to educate the gay community and other impacted sections of the population—especially poor Black and Latino people in the inner cities—were censored by top government officials who deemed them incompatible with Bible-based traditional morality. State, local, and federal laws blocked condom distribution and needle exchanges to combat the spread of AIDS and other diseases through shared needles. (Even today many states have not legalized needle exchanges). All the while, AIDS spread, and killed far more people than necessary.

Overseeing America’s war on the victims of AIDS—with a vengeance, for eight hellish years—was President Ronald Reagan. Reagan choked off all but minimal funding for research, treatment, and education. Year after year after year, Reagan refused to even utter the word “AIDS” as the plague spread—through that silence encouraging neglect, ridicule and marginalization of AIDS victims. Reagan surrounded himself with and promoted Christian fascists like Jerry Falwell, who condemned AIDS victims saying, “You cannot shake your fist in God’s face and get by with it.”

Big pharmaceutical companies first saw no profit incentive, and thus no urgency, to devote the necessary resources to life-saving research, and later competed with each other to develop treatments, refusing to allow researchers to share what they were discovering and delaying the development of effective treatment.

And mainstream (ruling class) media did their part by alternately ignoring the AIDS epidemic, and spreading inaccurate information that caused panic.

When Reagan was finally compelled to speak to why his administration had not just ignored AIDS, but spread ignorance, he made a joke to the effect that since he had opposed and shredded any and all programs that addressed human needs, why should he behave any differently to victims of AIDS!

Reagan was brought forward to turn back positive changes in society that were a product of fierce struggles in the 1960s against the war in Vietnam, against white supremacy, and male supremacy. This was also the time when the U.S. empire faced a serious challenge from the Soviet Union. Part of his mission was to weld together a section of people who would be a base for a more openly reactionary restructured U.S. society—a leaner, meaner, more overtly white supremacist and male supremacist one. The dehumanization and ostracism of gay people was a major element in this.

We also need to be aware of the positive—and in significant ways “subversive of the system”—potential of the assertion of gay “identity” and gay rights, even with the very real contradictions in this, including the narrowing tendencies of “identity politics” as well as conservatizing influences related to traditional marriage, and, for that matter, the campaign to be allowed to be part of the imperialist military while being openly gay. Even with all that, in its principal aspect this has, and can to an even greater degree have, a very positive, “subversive of the system” effect. This is a contradiction which, in the society overall, is “out of the closet.” It could be forced back into the closet, and underground, with not only the stronger assertion of the kind of fascist movement that is being supported and fostered by powerful ruling class forces in this period, but with the actual assumption of a fascist form of bourgeois dictatorship. But the struggle against the oppression of gay people is not going to be easily suppressed. We should understand the potential of this as well, and the need to relate correctly to this, to foster the further development of its positive potential and its contribution to the movement for revolution.

HEROES WHO OPPOSED THE CRIME

In the face of all this, heroes emerged to put it all on the line to STOP this crime. Gay rights fighter Larry Kramer defiantly called on people to Act up! Fight back! Fight AIDS! When asked why there was no sense of urgency in the government’s response to AIDS, Kramer called out the government for seeing the lives of gay people, Black people, Latinos, intravenous drug users, and prostitutes as worthless. He demanded that people go into the streets and fight for their lives.

In addition, a significant number of scientists and medical researchers, along with AIDS patients and public health workers, worked tirelessly and in the face of denial of resources, to search for treatment. They fought to demand faster government and drug industry action. And they called out and exposed superstition and ignorance about AIDS and its victims.

In the decades since Reagan, the contours of the AIDS crisis have changed radically. The rate of people dying from AIDS in the U.S. mainly kept increasing annually till about 1995—over 40,000 people died that year alone in the U.S.—and then began to decrease as treatment became more effective and available. Today those hit hardest by AIDS in the U.S. are Black men who have sex with men and other people who are still cut off from access to treatment by a range of factors related to the oppression of Black people in general in U.S. society.

At the same time, on a global scale, the AIDS epidemic is actually exponentially worse today than it was under Reagan. About 34 million people worldwide have died from AIDS and about 650,000 in the U.S. We’ll cover this in a future installment of this series.

The main sources for this article are:

And the Band Played On: Politics, People, and the Aids Epidemic, by Randy Shilts.

Both are powerful and valuable indictments of the crimes against people with AIDS in that era. The conclusions and framework in this article are, of course, our own.