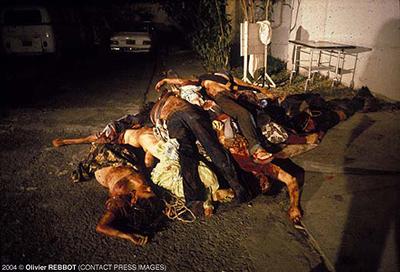 In El Salvador a right-wing government backed by the U.S. suppressed a leftist rebellion in a 12-year war beginning in 1980—killing and torturing more than 70,000 people in a country with a population of about six million. Above: "Death squad" victims in San Salvador, El Salvador, 1981.

THE CRIME: Since 1946, the U.S. Army’s School of the Americas (SOA) has trained military officers from countries all over Latin America. The school’s curriculum includes sniper training, commando and psychological warfare, military intelligence, and interrogation tactics—including the use of torture, rape, disappearances, assassinations, and mass killings. 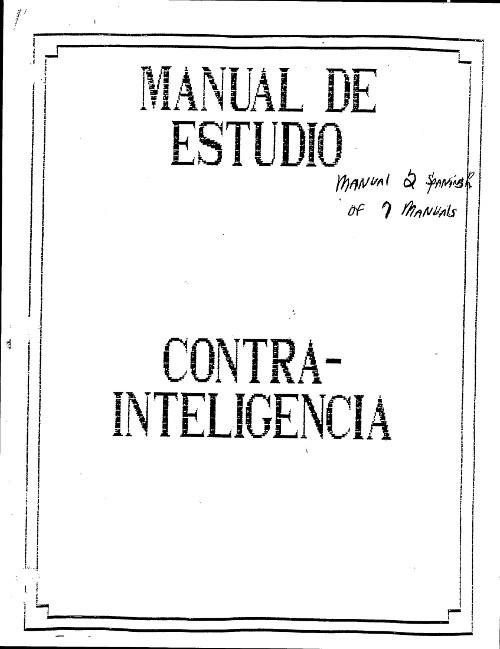 CIA and U.S. Army manuals used at the School of the Americas (now WHINSEC) have detailed torture techniques and advocated extortion, blackmail, and the targeting of civilian populations. Shown at left, the cover of "Study Manual: Counter-Intelligence," one of the seven Spanish-language manuals drafted in 1987 by U.S. Army military intelligence officers in Panama.

CIA and U.S. Army manuals used at the SOA have detailed torture techniques and advocated extortion, blackmail, and the targeting of civilian populations. A former political prisoner in Paraguay described how a section of these manuals gives “interrogators” instructions on “how to keep electric shock victims alive and responsive” and “recommends dousing the victims’ heads and bodies with salt water, and includes a sketch showing how this ‘treatment’ should be carried out.” Hundreds of thousands of people in Latin America have been tortured, raped, assassinated, “disappeared,” massacred, and forced to flee their homes and become refugees by armies and death squads led by military officers trained at the SOA.

Here are just some of the criminals who graduated from the SOA and the crimes they carried out: 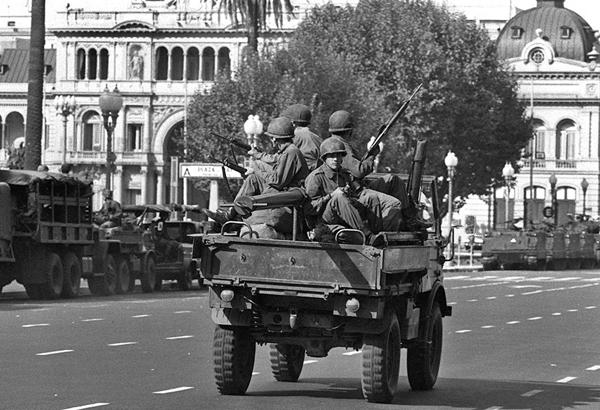 March 1976: Argentina's army troops patrol the streets of Buenos Aires after a military coup led by right wing military officers Emilio Massera and others. These military juntas organized and carried out the repression of political dissidents and perceived dissidents and were responsible for the illegal arrests, tortures, killings and/or forced disappearances of an estimated 9,000 to 30,000 people. (AP photo) 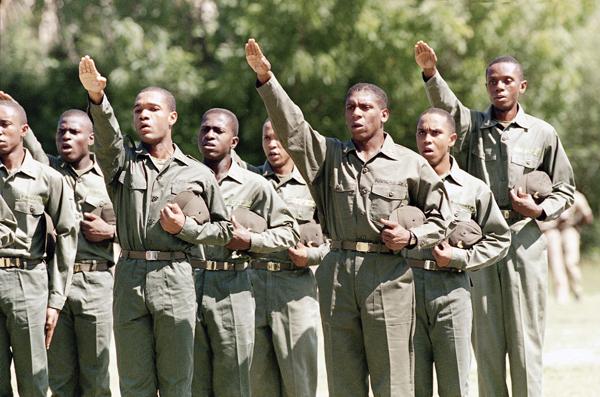 This school for mass murderers and torturers was first established in Panama as the U.S. Army Caribbean Training Center. It was renamed the School of the Americas under President Kennedy in 1961 and relocated to Fort Benning, Georgia, in 1984. The SOA was declared closed in December 2000 but then reopened one month later with a new name—the Western Hemisphere Institute for Security Cooperation, or WHINSEC. Since the name switch and other cosmetic changes, graduates have continued to be involved in various coups and attempted coups, including the June 2009 military coup that overthrew Honduran President Manuel Zelaya. Out of 25 Colombian graduates from 2001 to 2003, 12 have either been charged with a serious crime or commanded units whose members had reportedly committed multiple extrajudicial executions.

THE CRIMINALS: Every U.S. administration since World War 2 has relied on the School of the Americas to train military officers from Latin America.

More than 65,000 military officers have undergone training at the SOA. In addition to those mentioned above, SOA graduates who have headed military coups and murderous regimes include: Manuel Noriega and Omar Torrijos of Panama; Leopoldo Galtieri and Roberto Viola of Argentina; Juan Velasco Alvarado of Peru; Guillermo Rodríguez of Ecuador; and Hugo Banzer Suárez of Bolivia. Officers trained at the SOA have been and are in the command of armies of numerous countries in Latin America that enforce oppressive rule under U.S. domination. 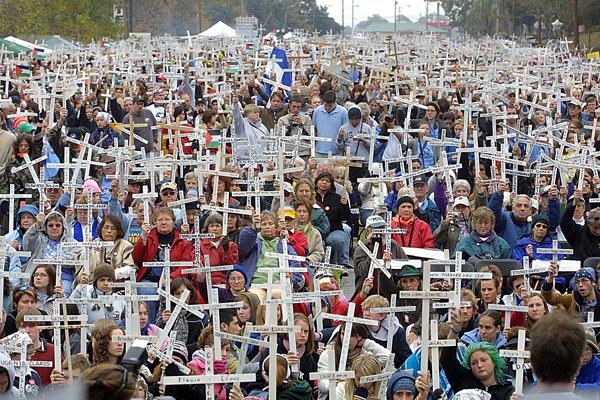 November 2005: Thousands of people gather outside the gates of Fort Benning during the annual protest against the Western Hemisphere Institute for Security Cooperation, formerly known as the Army's School of the Americas. Each cross has the name of a person killed by U.S.-backed military in Latin America. (AP photo)

November 2005: Thousands of people gather outside the gates of Fort Benning during the annual protest against the Western Hemisphere Institute for Security Cooperation, formerly known as the Army's School of the Americas. Each cross has the name of a person killed by U.S.-backed military in Latin America. (AP photo)

THE ALIBI: The stated purpose of the school is to “promote military professionalism, foster cooperation among the multinational military forces in Latin America, and expand Latin American armed forces’ knowledge of United States customs and traditions.” Defenders of the school argue that any human rights abuses committed by graduates were not because of their training at Fort Benning, but in spite of it. They also emphasize that only a small number of their total graduates have been accused of abuses.

THE ACTUAL MOTIVE: U.S. imperialism emerged from World War 2 as the most dominant military, economic, and political power in the world—but it also faced a challenge from the then-socialist Soviet Union, the founding of the People’s Republic of China led by Mao Zedong in 1949, and emerging struggles for national liberation in many other parts of the world. In this context, the School of the Americas played a decisive strategic role—especially in Latin America and the Caribbean, which the U.S. imperialists claimed as their “backyard.” After socialism was defeated and capitalism came back to power in the Soviet Union in the mid-1950s, the Soviet Union developed into an imperialist power. By the 1970s, there was a "Cold War" rivalry between the U.S. and Soviet imperialist superpowers. The Soviets posed a challenge to the U.S. and the West around the world--including through their influence over movements and armed groups fighting U.S.-backed regimes in Central and Latin America and other parts of the world.

The U.S., in turn, countered with even more repression, oppression, and backing for reactionary regimes. In this light, the training of military officers from Latin America was critical, enabling the U.S. to rely on these armed forces to act in the interests of U.S. imperialism. That has meant carrying out genocidal terror and mass murder against insurgencies and civilian populations, bloody coups to overthrow elected governments that were considered a challenge to those U.S. interests, and other crimes. With major shifts in the world in the past several decades, the U.S. rulers now face different challenges to their empire—but maintaining domination over their “backyard” remains crucial to their overall interests.

REPEAT OFFENDERS: Today’s School of the Americas, WHINSEC, continues to play an important role in maintaining U.S. domination over the countries in the Western Hemisphere. Under the pretext of “counter-narcotics” and “anti-terrorism” operations, the U.S. has pushed to establish permanent joint security operations with Mexico (the Merida Initiative) and with the countries of Central America (Central American Regional Security Initiative, or CARSI), giving the U.S. military even more direct influence over regional military forces and the freedom to operate openly in these countries. SOA/WHINSEC has an ongoing role in training military officers from these countries to operate even more closely under the command and control of the U.S. military.