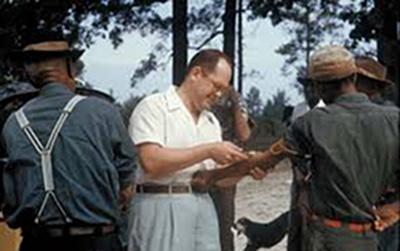 Between 1932 and 1972, the U.S. Public Health Service and the Centers for Disease Control carried out experiments on 600 Black men in the rural South. The supposed "study," according to a commentator, "used human beings as laboratory animals in a long and inefficient study of how long it takes syphilis to kill someone." Above, blood being drawn in the early 1950s.

Between 1932 and 1972, the U.S. Public Health Service (PHS) and the Centers for Disease Control studied the progression of untreated syphilis in a group of rural African-American men in Alabama under the guise of giving them free health care. According to the Centers for Disease Control, the men were told they were being treated for having “bad blood.”

A total of 600 African-American sharecroppers from Macon County, Alabama, were enrolled in the study. Of them, 399 had contracted syphilis before the study began, while the remaining 201 did not have the disease. These impoverished and often illiterate subjects were recruited with misleading promises of “special free treatment,” which were actually spinal taps done without anesthesia to study the neurological effects of syphilis, and they were enrolled without their informed consent (the men were never told the name of the study). The men were given medical care, meals, and free burial insurance for participating in the study. Poverty and racism were so profound that these benefits were unheard of among Black sharecroppers and a big enticement for agreeing to join the study.

None of the men infected were even told they had the disease and none were treated with penicillin even after the antibiotic became the standard treatment of syphilis in 1947—25 years before the Tuskegee study ended. Twenty-eight of the men died directly of syphilis, 100 died of related complications, 40 of their wives were infected, and 19 of their children were born with congenital syphilis.

The U.S. Public Health Service began the experiment under the Hoover administration in conjunction with Tuskegee University in Alabama, and it extended all the way to the Nixon regime.

The study was to record the natural history of syphilis among Black people. The study was called the "Tuskegee Study of Untreated Syphilis in the Negro Male," and when it began there was no safe and effective treatment for syphilis.

The intent of this racist study was to discover how syphilis affected Black people as opposed to whites. It was thought that whites experienced more neurological complications from syphilis compared with Black people, who were thought to be more susceptible to cardiovascular damage, and that the study would show this. “The PHS expected to validate its belief in a specific racial dimorphism of syphilis: whereas the disease was thought to do its worst damage to the neurological systems and brains of whites, it was thought to wreak its worst havoc on the cardiovascular systems of Blacks, sparing their relatively primitive and ‘underdeveloped’ brains,” Harriet A. Washington wrote in her 2007 book, Medical Apartheid—The Dark History of Medical Experimentation on Black Americans from Colonial Times to the Present.

Although the U.S. Public Health Service touted the study as one of great scientific merit, it has produced zero benefits to society or medical science. It took almost 40 years before someone involved in the study took a hard and honest look at the end results, reporting that “nothing learned will prevent, find, or cure a single case of infectious syphilis or bring us closer to our basic mission of controlling venereal disease in the United States.” When the experiment was brought to the attention of the media in 1972, news anchor Harry Reasoner described it as an experiment that “used human beings as laboratory animals in a long and inefficient study of how long it takes syphilis to kill someone.”

Medical Apartheid—The Dark History of Medical Experimentation on Black Americans from Colonial Times to the Present, by Harriet A. Washington, Chapter 7: “A Notoriously Syphilis-Soaked Race” – What Really Happened At Tuskegee?”