On July 28, 1915, U.S. President Woodrow Wilson ordered 330 U.S. Marines to invade Haiti’s capital city of Port-au-Prince. This was the beginning of a 19-year U.S. occupation that didn’t end until 1934. At the time of the invasion the political situation in Haiti and the government itself were extremely unstable. U.S. troops landed after Haitian President Vilbrun Guillaume Sam was killed by people in the streets. And Sam himself had come to power after leading a revolt to topple the president a year earlier. 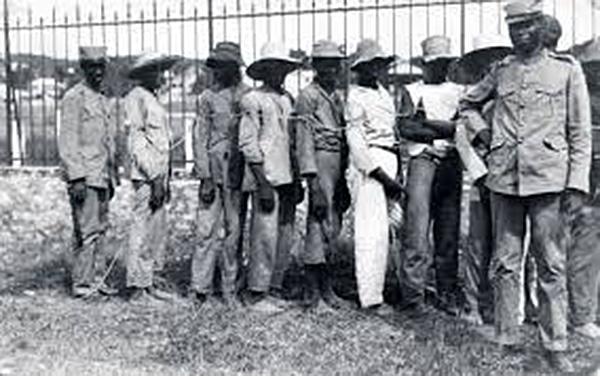 The Haitian people fiercely resisted the U.S. occupation in a series of revolts which the U.S. military ruthlessly crushed. Haitian rebels are enslaved in ropes, 1915.

Haiti, a Caribbean country that shares the island of Hispaniola with the Dominican Republic, had been France’s most lucrative colony until the Haitian people rose up in the largest successful slave rebellion in history, led by Toussaint L'Ouverture in 1791. At the time of the U.S. invasion, Haiti was a poor, mainly rural country that different foreign imperialist powers were trying to dominate.

After the invasion, the U.S. immediately gained complete control over Haitian finances. Even before the invasion U.S. soldiers had gone to the Haitian National Bank, removed its gold reserves and sent them to National City Bank (now Citibank) in New York City. The U.S. also forced the election of a new pro-American puppet president, Philippe Sudré Dartiguenave, by the Haitian legislature in August 1915.

In September 1915, the U.S. ratified the Haitian-American Convention, a treaty granting the U.S. security and economic oversight of Haiti for a 10-year period. The U.S. was given veto power over all government decisions in Haiti, and U.S. Marine Corps commanders served as administrators in Haiti’s government departments.

By 1918, the Haitian Constitution, which had banned foreign purchases of land, had been rewritten by Franklin D. Roosevelt, who was then Assistant Secretary of the Navy (and would later become president of the U.S.), to explicitly allow foreign ownership of Haitian property. Land was seized from small peasants to create large plantations; the economy was reorganized so that 40 percent of Haiti’s gross domestic product flowed to U.S. banks. The U.S. seized control of Haiti’s banks and the national treasury and 40 percent of Haiti’s national income was designated to repay debts to American and French banks. This included debt that originated in the “indemnity” that Haiti was forced to pay to France for property—including slaves—the French lost after the Haitian Revolution, the equivalent of $40 billion in today’s currency.

Racist attitudes toward the Haitian people by U.S. occupation forces were blatant and widespread. Robert Lansing, then U.S. secretary of state, justified the occupation by claiming Haitians had “an inherent tendency toward savagery and a physical inability to live a civilized life,” so were incapable of self-government. Medill McCormick, a senator from Illinois, wrote in 1920 that the American occupation was necessary “to develop the country, the Government, and above all, the civilization of the people, of whom the overwhelming majority have African blood in their veins.” There were many reports of U.S. Marines sexually assaulting Haitian women. The occupation included segregation and enforced chain gangs to build roads and other construction projects. 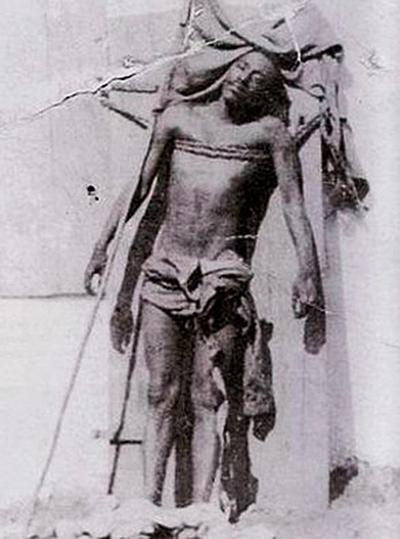 U.S. Marines murdered one of the occupation's most famous resistance fighters, Charlemagne Péralte, then pinned his body to a door where it was left to rot in the sun for days.

The Haitian people fiercely resisted the occupation in a series of revolts, which the U.S. military ruthlessly crushed—murdering leaders, burning villages to the ground, and killing thousands of people.  Haitian-American author Edwidge Danticat wrote: “My grandfather was one of the Cacos, or so-called bandits, whom retired American Marines have always written about in their memoirs. They would be called insurgents now, the thousands who fought against the occupation. One of the stories my grandfather’s oldest son, my uncle Joseph, used to tell was of watching a group of young Marines kicking around a man’s decapitated head in an effort to frighten the rebels in their area.” Danticat also talks about how the Marines murdered one of the occupation’s most famous resistance fighters, Charlemagne Péralte, then pinned his body to a door where it was left to rot in the sun for days.

During the 19 years of the U.S. occupation, at least 15,000 Haitians were killed. In 1918 there was an uprising of some 40,000 people. After the Haitian Gendarmerie was overwhelmed, U.S. Marines helped put down the rebellion, killing 2,000 people. During a December 1929 demonstration in the city of Les Cayes, part of a nationwide strike and ongoing rebellion, U.S. Marines fired on 1,500 people, wounding 23 and killing 12.

The U.S. didn’t end its occupation until 1934—leaving behind a brutal, U.S.-trained Haitian National Army to repress the people.

This invasion and occupation was the beginning of, and laid the basis for, subsequent decades of U.S. domination of Haiti and brutal U.S.-backed regimes.

François “Papa Doc” Duvalier came to power in the 1957 presidential election and set up his own army of thugs—the Tontons Macoutes. The Duvalierist reign of terror—supported and backed by the U.S.—killed roughly 50,000 people. When Papa Doc died in 1971, U.S. warships were stationed just off the coast of Haiti to oversee a smooth transition of power to Duvalier’s son, Jean-Claude (“Baby Doc”). Baby Doc was closely associated with the “American Plan,” which explicitly aimed to cut the ground out from under peasant agriculture by large-scale imports of cheaper U.S. goods. This drove hundreds of thousands of peasants into the cities and shantytowns, desperate for work in U.S.-owned assembly plants. These were being set up by companies like Disney and Kmart, some paying workers 11 cents an hour to make pajamas and T-shirts.

After popular uprisings ousted this brutal tyrant, the U.S. maneuvered and intervened—opposing any forces that threatened U.S. interests—and worked unsuccessfully to prop up and stabilize a series of governments that the Haitian people called out as “Duvalierism without Duvalier.” In 2004, the U.S. was directly involved in overthrowing the popularly elected president, Jean-Bertrand Aristide.

1957-1986: The U.S. government, which backed the brutal dictatorships of “Papa Doc” Duvalier and “Baby Doc” Duvalier with their murderous Tonton Macoute militia that killed thousands of people.

Wilson claimed the reason for the 1915 invasion and occupation was to “re-establish peace and order...”

At the time of the invasion, the U.S. Secretary of the Navy instructed Admiral William Deville Bundy, commander of the invasion, to “protect American and foreign” interests. These interests had everything to do with U.S. imperialism recognizing the strategic importance of controlling Haiti, as part of dominating the Caribbean region and Latin America as a whole, while preventing rival powers from gaining influence.

The years leading up to the U.S. invasion of Haiti was a time of great political instability—where there were a series of political assassinations and forced exiles resulting in six presidents holding office between 1911 and 1915. Various rebel armies carried out coups, enlisted by rival political factions. This was taking place in a situation where German imperialism—which at that time was embroiled in World War 1 against other European imperialist powers over which one would dominate the world—was gaining influence in Haiti and increasingly becoming a rival power for the U.S. in the region. The U.S. itself would enter that war two years later and emerge from it as a major imperialist power. It was in this context of violent contention among imperialists for empire that it was crucial for the U.S. to control this nearby island of Hispaniola.

The official U.S. government “Office of the Historian” website says:

As a potential naval base for the United States, Haiti’s stability concerned U.S. diplomatic and defense officials who feared Haitian instability might result in foreign rule of Haiti. In 1868, President Andrew Johnson suggested the annexation of the island of Hispaniola, consisting of Haiti and the Dominican Republic, to secure a U.S. defensive and economic stake in the West Indies.... In 1915, Haitian President Jean Vilbrun Guillaume Sam was assassinated and the situation in Haiti quickly became unstable. In response, President Wilson sent the U.S. Marines to Haiti to prevent anarchy. In actuality, the act protected U.S. assets in the area and prevented a possible German invasion.