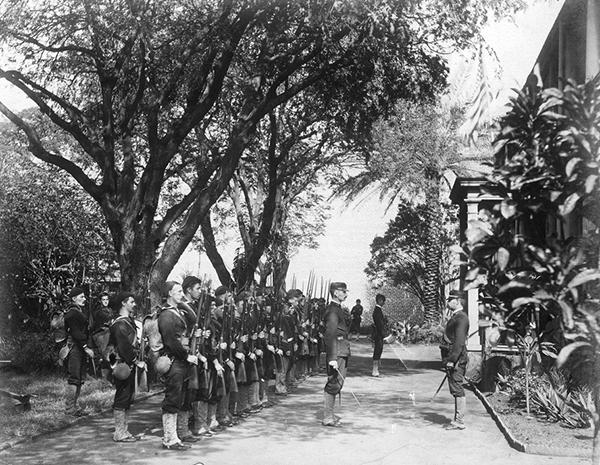 Marines marched from the USS Boston to I'olani Palace as part of taking over the Hawai’ian government.

The Overthrow: On January 17, 1893, 162 armed U.S. sailors and Marines marched from the USS Boston, harbored in Honolulu Harbor, to Iolani Palace, the center of Hawai’i’s government, and set up camp. This act of war against a nation struggling for independence from foreign domination put the U.S. firmly in control.

Lorrin Thurston, the grandson of an American missionary who had the support of Hawai`i’s white business class, had organized a coup d’etat. And the U.S. had agreed to provide military back up. Thurston’s core conspiracy group, which included Hawai`i’s powerful sugar barons, joined the “Honolulu Rifles” a heavily armed militia of 1,500 largely white businessmen, who patrolled the streets to put down any Native Hawaiians who might rebel.

The “Honolulu Rifles,” a heavily armed militia of 1,500 largely white businessmen, who patrolled the streets to put down any Native Hawai’ian rebels.

Queen Lili`uokalani, the reigning monarch in Hawai`i at the time, was in the midst of a struggle for a new constitution aimed at reducing the control of the powerful white elite and establishing independence from foreign powers. She now faced the challenge of the U.S. military and a gang of businessmen armed with modern rifles, machine guns and cannons. The Hawaiian Nation had only a small volunteer army and a few hundred outdated muskets. Facing a bloodbath, Queen Lili`uokalani surrendered under protest.

U.S. Government Minister John L. Stevens, who had been in charge of the U.S. military action, proclaimed Hawai`i a U.S. Protectorate (a dependent territory). A temporary government, the “Committee for Safety,” was formed to protect the white elite and terrorize the Native Hawaiian population. One week after the overthrow a new “Reciprocity Treaty” was signed with the U.S.—that guaranteed trade protections for Hawaiian sugar and most notably included the cessation of Pearl Harbor (which had already been identified as a potential U.S. military base).

The overthrow was met by immediate resistance—within days the Hawaiian people began to form organized protest groups. In the face of mass resistance a new constitution was written and the Republic of Hawai`i was proclaimed on July 4, 1894. The Republic was ruled by a single party controlled by white businessmen and Sanford B. Dole was its self-appointed president. 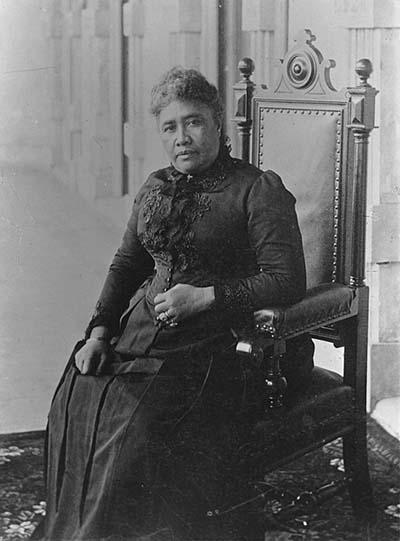 In 1895, a rebellion led by Royalists with the goal of reinstating Queen Lili`uokalani failed in its attempt to overthrow the Republic. The Queen was falsely accused of collaborating and was sentenced to prison. While in prison, she signed an agreement to abdicate her throne in return for the release of her jailed supporters. She was then held under house arrest in the I`olani Palace until she was pardoned in 1896. Thereafter she regularly traveled to Washington D.C. to fight against annexation and for Hawaiian Independence.

Forced Annexation: The 1893 overthrow of Hawai`i coincided with the beginning of an increasingly open battle within the U.S. ruling class over U.S. expansion and the U.S.’s relationship with Japan and Spain. By 1895 a draft plan to annex Hawai`i to the U.S. was introduced in Congress and Hawaiians began a new round of protest against annexation.

Then on February 14, 1898 the U.S. Battleship Maine blew up in Havana Harbor, Cuba; the U.S. blamed Spain for this and launched the Spanish-American War, which included fighting in the Philippines (then a Spanish colony). President McKinley, seeking a staging ground to deploy troops and supplies to the Philippines and expand U.S. power in the Pacific, moved quickly on plans to annex Hawai`i. In a campaign of jingoism—extreme patriotism in the service of aggressive foreign policy—the slogan was put out, “Remember the Maine” and the annexation of Hawai’i was forced through on July 7, 1898 and the U.S. appointed the first U.S. Territorial Governor of Hawai`i.

The century following annexation was characterized by the systematic oppression of the Hawaiian people. Their lands were confiscated by both “legal” and illegal means and their ties to the land were severed. Hawaiian language newspapers (of which there were many), were shut down and the Hawaiian language was made illegal. Flying the Hawaiian flag was outlawed, and genuine forms of Hawaiian culture were suppressed or made illegal. The real history of resistance to the overthrow and annexation was re-written and the myth that the U.S. had been welcomed was promoted. Certain aspects of Hawaiian culture were combined with fabricated fantasies, marketed to tourists—further alienating Hawaiian people from their culture. 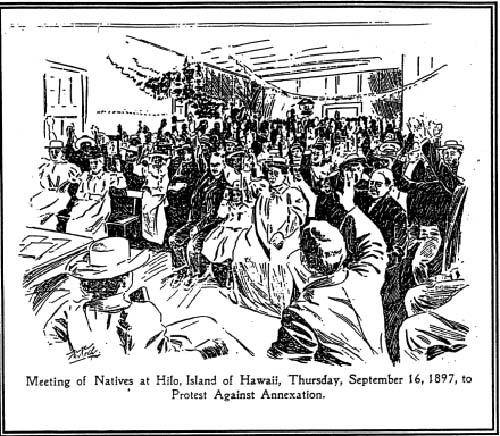 People meet to plan opposition to the annexation of Hawai`i to the U.S.

Corporate plantation agriculture had a devastating impact on the health and lives of native Hawaiians, driving them off the land, and wiping out subsistence agriculture. Throughout the 1800s, waves of immigrant workers were viciously exploited as indentured servants.

Throughout the century the U.S. military built dozens of bases and installations, including Pearl Harbor, which today is the headquarters of the U.S. Pacific Fleet. Entire islands and valleys were “leased” for as little as $1 a year and used for bombing and live fire practice. Harbors became so toxic that they could no longer provide fish; wetlands so polluted they could no longer sustain wildlife, and huge swaths of agricultural land were poisoned. U.S. nationalism and militarism, especially punctuated by the events of World War I and World War II, further undermined the identity of the Hawaiian people. In 1959 Hawai`i became the 50th state.

U.S. Minister John L. Stevens: U.S. diplomat who led the invasion of the U.S. military during the overthrow, after having conspired with white businessmen in planning a coup d’etat against Queen Lili`uokalani. Benjamin Harrison was the U.S. President at the time.

Lorrin A. Thurston: Grandson of American missionaries, who organized the “Honolulu Rifles,” a white businessmen’s militia; architect behind the coup d’etat of Queen Lili`uokalani.

Sanford B. Dole: Descendent of American missionaries and vociferous advocate of American control and/or destruction of anything Hawaiian. Self-appointed president of the Republic of Hawai`i formed after the overthrow. Appointed by U.S. President McKinley to be the First Territorial Governor of the Territory of Hawai`i after annexation.

U.S. President William McKinley: Aggressive advocate of U.S. imperialist expansion who signed a Treaty of Annexation in 1887, initially rejected by Congress, but then in 1898, in the midst of war hysteria accompanying the Spanish-American war, pushed through.

The purported alibi for the overthrow was to protect American citizens residing in Hawai`i.

The 1893 overthrow was to protect the interests of Hawai`i sugar planters, who had invested huge amounts of money in fields and mills, and were now facing increasing competition from the sugar market in the U.S. and a rise of Hawaiian nationalism. The annexation of Hawai`i was to fulfill the need for a “rest and re-supply station” for U.S. troops deploying to the Philippines during the Spanish-American War.

By 1881 there were rumblings within the U.S. State Department that Hawai`i should become part of the “American system” and in 1891 the U.S. permanently stationed a warship in Hawai`i “to keep a United States vessel there from this time on to guard American interests in the Islands.” The overthrow and annexation of Hawai`i were part of U.S. imperialist expansion in the Pacific: the U.S. saw it crucial to the control of Hawai’i—which could be used as a military base in the middle of the Pacific Ocean. While the overthrow was set in motion by the contradiction between powerful white businessmen and the monarchy, the actual motive for the U.S. was imperialist expansion and the military control of the Pacific.

Hiram Bingham, one of the first New England missionaries to Hawai`i, speaking about the Native Hawaiian people: “Can these be human beings! How dark and comfortless their state of mind and heart. How imminent the danger to the immortal soul, shrouded in this deep pagan gloom! Can such beings be civilized?”

Lorrin Thurston, Feb 3, 1893 [days after the overthrow]: “The trouble was, that the Queen did not wish to resign constitutionally, but instead sided with elements whose cry had for years been ‘Hawai`i for Hawaiians.’ The Americans and Europeans, who have by far the greatest interests there, are not willing to let the native spend the money which they have labored so hard to make.”

Nation Within: The History of the American Occupation of Hawai`i , Revised Edition, Tom Coffman, 2009